Random musings in continuation of the discussions on the construction of the 7 (or is it 5?) -starÂ hotel in Islamabad on Adil Najam’s blog,Â All Things Pakistan….

Pakistans recent financial-isation and commercialization of its aesthetics is saddening. I am reminded of this beautiful verse in urdu:

Loosely translated (for the non-Urdu readers)

The inspiration for this post comes from an image of the Lahore Railway Station sent to me by my J. Brommel. Once a regal specimen of the Raj architecture and a landmark of Lahore it is losing its grandeur. The sad part is that these are not-so-old Raj structures. Forget the Mughals and the eras before. What has happened to the Lahore Railway Station is a metaphor for transnational control and the rise of marketing gods.

The photos below from deffence.pkÂ show the Lahore majestic Station in 1895 and 1995. As the top image shows that in a little over ten years, it looks so different. Unregulated commercialization!

I am not against modernity nor naive enough to ignore the fact that population pressures and globalization are pressing issues. However, losing the character of our cities and historical landmarks is just depressing.

Driving through Defence [Lahore], you cannot ignore that it is not only trees Â like Jacaranda and Bottle Brush Â that are imported, but even the architecture of houses that reflects an imported look. You see all these residences with tiled, sloping roofs and huge glass windows, both of which are completely inappropriate in a place where it does not snow, and the sun is so harsh, that the extensive use of glass traps hot air in the buildings, necessitating the use of air-conditioners. Cant help wondering where we see ourselves headed.

Commenting on the trend to expand constructed area, she further remarks:

I realise that both our urgency to urbanise and our reluctance to grow local trees, have the same root cause. The value of the design of our house, office, neighbourhood and city, as well as the Â What does matter, is that this design and this plant should look imported. The further away it comes from, the more we esteem it.
Why?
The only reason that comes to mind is that we must be ashamed of ourselves. We have internalised a cultural inferiority that embarrasses us of any association that reminds us of our roots, of our own indigenous selves.
Having lost confidence in what our own culture and local wisdom had to offer, we have lost knowledge of it too. We are now desperate to fill ourselves and our surroundings with indicators of the cultural, racial and economic superiority of the foreign.
Ironically, we embrace our own wisdom when it comes back to us, neatly packaged via the West
Using the lens of the foreigner, we see ourselves categorised as crude,boorish,uncultured and uncivilised. We then make every effort to prove our distance from all those practices that typify these traits.
And what happens when we follow this route?
I guess we really become ridiculous caricatures of what we are not.

And now the emerging elites (read estate dons, powerful brokers, commodities dealers and other groups that wield enormous power in Pakistan) want to replicate a hideous version of the Burj in Islamabad in the form of The Centaurus the hotel with the indeterminate number of stars!. Good luck to them and good-bye to our centuries old traditions of art, architecture and public aesthetics.

As I was concluding this post, another shockingÂ image hit me courtesy theDaily Times (17 September, 2006). The caption to Abid Nawazphotograph reads:

The tomb of Bahadur Zafar Jang on the canal is decorated for a wedding, in violation of all conservation laws. 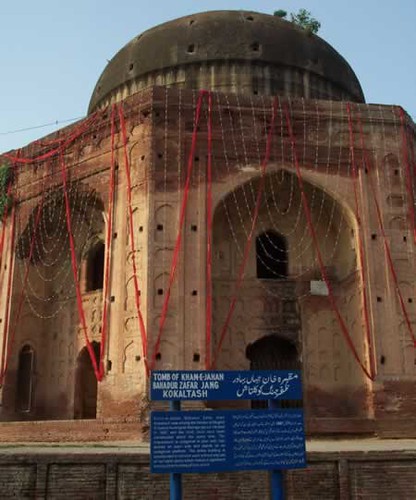 What else is there left to say.