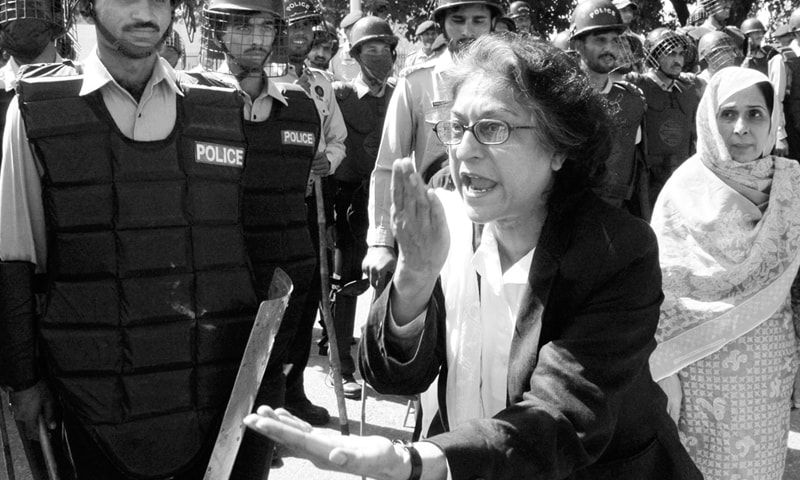 It will take some time to accept that Asma Jahangir has gone silent. That she is not at the centre of Pakistan’s political discourse. As a formidable and relentless fighter, Asma Jahangir personified the struggles Pakistanis have waged against executive excesses, shameful cultural practices and discriminatory legislation throughout the country’s history. Jahangir kept the torch of public liberty, freedom and democracy alive for decades. Since her foray into activism as a young woman, Asma Jahangir remained a fearless champion of democratic rights and, in many ways, the conscience of Pakistan during the last forty years.

A leading Pakistani lawyer, Jahangir was most renowned for her role as a human rights activist. This was a role which resulted in her confronting the military dictatorships of General Zia-ul-Haq and General Pervez Musharraf, as well as civilian autocrats. In 1972, when Asma Jahangir was a teenager, she filed her first petition to have her father — who had been arrested for denouncing war crimes in Bangladesh — released from prison. She won the case. In fact, the earliest and the only judgement against a military coup is attributed to her name. Her resistance to the Pakistan army’s active role in politics was legendary. In 1999, when sections of Pakistan’s civil society welcomed the apparently secular Musharraf, hers was the only clear, unequivocal voice against military intervention. A decade later when Pakistan rallied behind judges and lawyers to oust Musharraf, Jahangir was once again at the forefront.

In 1987, Asma Jahangir and her sister Hina Jilani partnered with other women lawyers formed the first law firm established by women in Pakistan, named the AGHS Legal Aid Cell. To date, AGHS has provided legal services to several women and members of minority groups, and it continues to be a benchmark against which the legal profession and public law in Pakistan will be judged in the annals of Pakistani history.

During Ziaul Haq’s dictatorship, Asma was also at the vanguard of activists who created the Women’s Action Forum (WAF). Jahangir, along with other women activists, led protests against enforcement of fundamentalist laws, specifically the Law on Evidence (which made a woman’s testimony inferior to that of men), together with demonstrating against the conviction of a 13-year-old blind rape victim for zina (adultery). WAF was the first spark of resistance against military rule and inspired men and women of all faiths, ethnicities and backgrounds to rally against a repressive dictatorship. Her struggles continued thereafter even when civilian governments were ruling Pakistan. She was as outspoken as before and refused to adopt a partisan line. Within years, Jahangir received global acclaim and became a symbol of progressive and liberal-democratic elements within Pakistan. She was recognised and honoured across the globe for her stellar contributions to human rights and advocacy for marginalised segments of Pakistani society.

Another key contribution by Jahangir was the establishment and nurturing of the formidable Human Rights Commission of Pakistan (HRCP). Today, it is the biggest and most credible network of rights’ activists in Pakistan with a presence in all corners of the country. Jahangir remained the Co-Chairperson of the HRCP for several years. She was also one of the founders of the South Asia Forum for Human Rights.

Even though Jahangir will always be remembered for her work in Pakistan, her influence had turned global in the past two decades. The United Nations appointed her as a Special Rapporteur of Freedom of Religion of the United Nations Commission on Human Rights. From 1998-2004, she also worked as a Special Rapporteur of the United Nations Commission on Extrajudicial, Arbitrary or Summary Executions, a job, which took her to Afghanistan, Central America and Colombia. In recent years, she was UN’s special rapporteur for Iran and her straight-talk angered the hardliners in Iran as well.

But it was home where she dazzled. In 2010, she was elected as the first ever woman president of the Supreme Court Bar Association. This was a time when she was also a fierce critic of the Chief Justice Iftikhar Chaudhry. Jahangir supported Chaudhry when Gen Musharraf wrongfully fired him in 2007 but once the judge regained his position, Jahangir was back to business of checking abuse of power. As the bar leader, Jahangir brought some sanity amid hyper-activism of the Supreme Court during 2010-2011.

Yet, her credibility at home was always challenged by fundamentalists and the all-powerful establishment. Her opponents in the Mullah-Military combine left no stone unturned to defame her. She was declared as a Western agent and, in recent years, an Indian stooge. The reason was obvious: Jahangir stood for peace with India and vociferously articulated an alternative vision for Pakistan which was secular, democratic and based on regional cooperation.

Her consistent stance on principles of human rights and democracy unnerved every ruler in the country. During Musharraf’s time, she was a fierce critic of his regime and he even named her several times in a disparaging manner. In 2005, she was abused and manhandled during a mixed gender marathon which had been organised to raise awareness about violence against women. Little wonder then that after Musharraf launched his second coup in the guise of an emergency in 2007, Jahangir was placed under house arrest.

Unlike many in Pakistan’s fractured civil society, Jahangir shunned public offices. Benazir Bhutto, in her two stints as Prime Minister, wanted Asma Jahangir to become a judge of the superior courts but Jahangir refused.

In 2013, Nawaz Sharif was elected as the prime minister for the third time. From the very start, it was evident that Sharif’s relationship with the establishment would be rocky to say the least. And it turned out to be just the same. A long drawn civil-military conflict culminated in the judicial ouster of Sharif. Throughout his tenure, Jahangir supported the primacy of civilian institutions and after Sharif’s controversial dismissal by the court, she was the staunchest of voices against the judicial excess. The opposition leader Imran Khan and his party distorted her position as political support for Sharif. Jahangir called out Khan for his soft stance on Islamic extremism and his bidding of the military establishment to destabilise Sharif. Jahangir’s detractors, therefore, multiplied as Khan’s young supporters saw her as the foe. In addition to being anti-Pakistan, an Indian agent, enemy of Islam, she was also painted as an apologist for ‘corrupt’ Sharif dynasty.

Jahangir fought back and with her usual gusto. Never deterred by personal attacks she was unmoved. Her positions on all matters, political and legal, remained unchanged. This was her real strength and confidence in principles she had remained loyal to.

This larger-than-life commitment to her passion and gritty hard work came at a cost. Her health suffered. Leading a highly stressful life — waging multiple battles at the same time — perhaps ended in that fateful cardiac arrest last Sunday. For many of us, it will be a black Sunday for we are yet to determine all that has been lost with the passing away of an exceptional individual.

Even in her death, Jahangir overthrew conventions and her public funeral was attended by women who are generally not allowed to pray with men. The right-wing has created a furore with fatwas flowing in. A nasty campaign on TV and social media continues defamation. But these desperate attempts are likely to fail in dwindling her legacy of resistance and hope.

Rest in power, Asma Jahangir. You showed us what a meaningful life entails.

Published in Daily Times, FEBRUARY 18, 2018: Asma Jahangir is no more — but her formidable legacy lives on