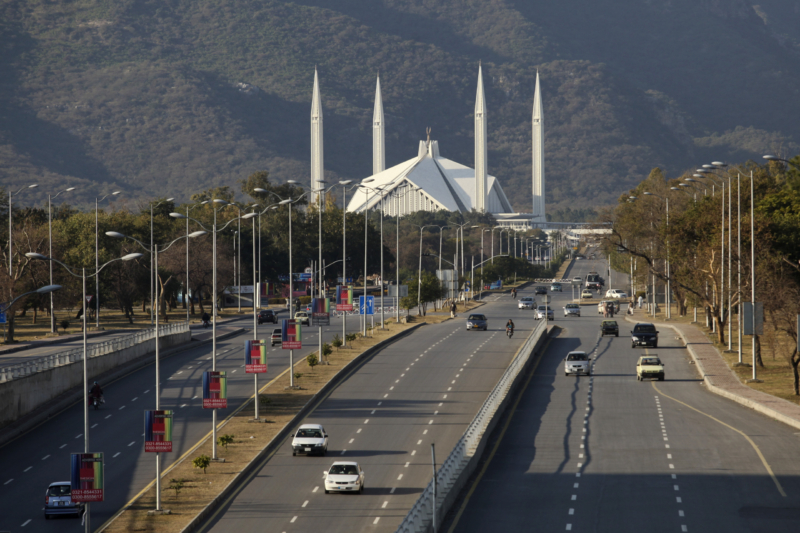 My op-ed published in the NEWS. This was also posted at ATP and a robust discussion took place there.

A week long sojourn in Islamabad just came to an end. It was not the Islamabad that I had lived in or the one that my memory was intimate with. It has changed and perhaps forever.

I have been an accidental resident of Islamabad as I was thrown into the sleepy folds of the capital by imperatives of securing a livelihood. Lahoris can never be content with any other city. But Islamabad’s serenity as a stark contrast to the urban mess of Pakistan was most endearing to say the least. Even its cultural wastelands were forgivable for the communion with Nature was a splendid alternative to civilisation. Thus the sprawling greenbelts of Islamabad and its wild foliage became a source of inspiration and muse. I left the city three years ago with fond memories.

But the return of this accidental native was not too charming. Islamabad over the last three years has confronted a development paradigm that reflects much of what is wrong with the elite-led progress in Pakistan. Whilst the political fissures have also erupted in the form of terrorism and activism around the issue of deposed judges, it is the brazen model of urban development that remains most worrisome.

Express-ways and highways have been built all over the place that can facilitate fast paced cars, cavalcades and power caravans. But the pedestrians who by even conservative estimates are 30 per cent of commuters find themselves at the wrong side of history. They have been virtually bypassed or at worst humiliated. Many of the express-ways have no provision of underground walkways or overhead bridges. Small wonder, that the absolute poor of Pakistan are also nearly the same percentage and almost as invisible.

The natural gifts of Islamabad have been mercilessly chopped in the name of widening the roads or even erecting senseless structures. Tracts of green areas that would bloom in the spring and sway in the monsoons have all gone. Barren squares reveal the idiocy of the initial layout of Islamabad that Nature had shielded for so long.

Where else in the world would find a public park space rented out to a global corporation and that too of dubious credentials such as the McDonalds. And, if the purpose was to entertain the hapless Islamabadites then why not patronise a local chain? This is crass commercialism being actively promoted by gurus of modernization and elites who find the global signs as a proof of having arrived. All of this has happened at the expense of the public aesthetic and values. Islamabad of today with its copycat musicals and made-to-order tourist villages is nothing but an attempt in cultural annihilation. Amazing that a city next to Gandhara and capital of the Indus valley terms Broadway remakes as high culture!

The original Islamabad-wallas remember how the CDA installed dustbins sported the chaste Urdu-Persian word Khashaak in bold. No more. It is now all English wonderland and a signpost on a major highway displays the route to “Atwar bazaar”. Since when has the mighty state language lost its relevance. If this was to be the future of Urdu, then why was there a need to alienate our fellow Pakistanis in the Eastern Wing now Bangladesh in the name of a uniform national language.

Believe it or not, Ramna, a Bengali name was used for the old sectors. If in the 1960s the Bengalis complained of excessive investments in Islamabad they were termed as traitors. Today, a similar fetish for capital investments in Islamabad remains unchanged. The complaints are muted often sidelined due to the bomb blasts and the glitz of highways and underpasses. In stark contrast, the poor relative town of Rawalpindi is quite neglected where a flood at Nullah Lai ravages segments of population and their livelihoods each year and where the martial and non-marital divides are difficult to overlook.

Islamabad continues to grow and is liked by many including the foreign diplomats thanks to its wondrous surroundings. But we are keen to make it a mess. Where have big roads and speed-ways been a substitute for traffic management and integrated urban planning? Even an undergraduate would know that. And, why is there no public transport system in place if this were the best that we want to showcase in the world.

While the entire country has been administered the magic dose of devolution, Islamabad remains ‘undevolved’ and its administration is highly centralized reflecting the culture of an overarching and central state. These are not accidental contradictions but symptoms of the larger malaise.

About time the Islamabadis woke up and shunned the flashy development for more substantive progress that includes the poor, creates livelihood beyond consumerism, saves the trees and focuses on long term urban vision rather than short term infrastructure feats.