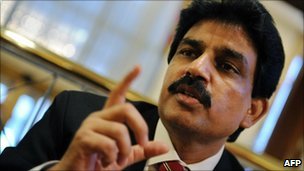 Raza Rumi
Sometimes it feels we are living in stone age where no dissent and no call for a tolerant society is possible. Murder, violence, mayhem are the order of the day. Today, we mourn the death of Shahbaz Bhatti who had been repeatedly threatened, but not intimidated.
It is time for Pakistan’s political parties to take stock of this situation and get their own ideological house in order before they are wiped out as well. Pakistani state organs have been appeasing the Right and Islamofasicsts for too long. It is time to stand up. If they think they can be safe then they ARE WRONG.
PTH condemns this murder and recalls that Pakistan was not created for this violence and bigotry that is now our halmark and has made us a joke in the international community.
Taseer’s murderers have to be booked, Benazir Bhutto’s murderers have to be brought to book and Bhatti’s murder should not go to waste.
Wake up Pakistan and our appeal to Pakistanis: stand up for your rights for living in a secure, tolerant society.
Here is a newsreport from BBC – sad and I hate to post it but then such are the times we live in:
Pakistan’s Minorities Minister, Shahbaz Bhatti, has died after two gunmen opened fire on his car in the capital, Islamabad, hospital officials say.

He was travelling to work when through a residential district when his vehicle was sprayed with bullets, police said.

Mr Bhatti, a Christian, is a leader of the ruling Pakistan People’s Party.

In January, he told the BBC he would defy death threats he had received from Islamist militants for his efforts to reform the country’s blasphemy law.

The blasphemy law holds a death sentence for anyone who insults Islam, but Mr Bhatti said it had been used to persecute minority faiths.

“I was told that if I was to continue the campaign against the blasphemy law, I will be assassinated. I will be beheaded. But forces of violence, forces of extremism cannot harass me, cannot threaten me,” he said.

On 4 January, Punjab provincial governor Salman Taseer, who had also strongly opposed the law, was shot dead by one of his bodyguards.

Next Post
Andrew Buncombe: Those who dare to speak out become a shooting target