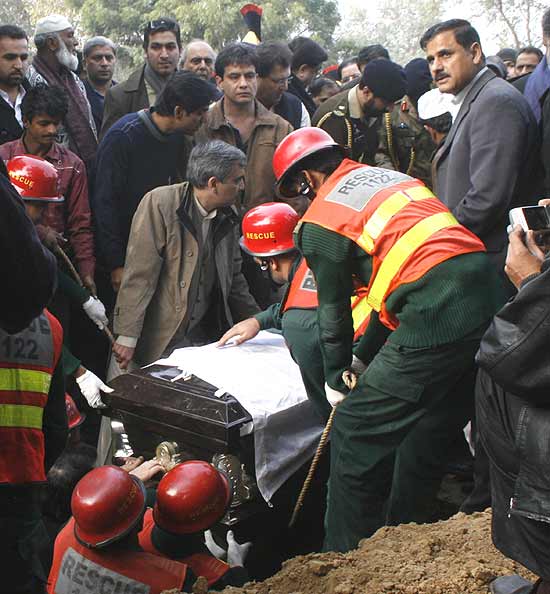 Salman Taseerâ€™s killing reflects the fight over Pakistanâ€™s soul (OUTLOOK INDIA)
AMIR MIR
When Punjab governor Salman Taseer stepped out of the Table Talk restaurant after having lunch with hotelier Sheikh Waqas and walked to his car parked in Islamabadâ€™s Kohsar Market on January 4, he must have been aware of the possibility of religious fanatics lurking around. Where in Pakistan havenâ€™t the sinister, dark forces of militant Islam penetrated? But what Taseer couldnâ€™t have foreseen perhaps is the precise visage of religious fanaticismâ€”that it could come dressed in the uniform of the Elite Force of the Punjab police, one of those very men who were to protect him from the implacable Islamists forever sniffing around for enemies who donâ€™t subscribe to their worldview.

As Taseer reached his car, a cry of Allah-o-Akbar echoed in the air. The voice was of his bodyguard, Malik Mumtaz Qadri, who then calmly emptied the magazine of his AK-47 into the governor. As Taseer collapsed, Qadri reloaded the rifle and sprayed another 30 bullets. He then placed the rifle on the ground and surrendered before the other eleven bodyguards, nine of whom were from the Elite Force. The remorseless pumping of bullets into Taseerâ€™s lifeless body reflected the depth of Qadriâ€™s hatred. The inaction of other bodyguards speaks of a larger conspiracy, or at the very least a silent, tacit support for Qadri. For the dead Taseer, it could hardly be a recompense to recall what he told the Herald magazine two years ago, â€œI remember the late Zulfiqar Ali Bhutto saying that history is written in the blood of martyrs.â€

Martyr Taseer he now isâ€”to the cause of liberal values, the secularism of the Jinnah brand, and for the effort of restoring to Pakistan its moderate, modern Islamic soul. The Punjab governor was slain, as Qadri was to later tell his interrogators, because of his criticism of the blasphemy law and his efforts to secure a presidential pardon for Aasiya Bibi, a poor Christian woman condemned to death by a Pakistani anti-terrorism court for having allegedly committed blasphemy (she has gone in appeal to the Lahore High Court).

The likes of Qadri, who believes the assassination now guarantees him a place in paradise, would hardly consider Taseer a martyr. He isnâ€™t a lonely wolf, for he confessed afterwards that he had informed other bodyguards about his intention to kill Taseer and requested them not harm him, as heâ€™d surrender after the contemplated act. â€œI have been looking for an opportunity to shoot Taseer because I did not want to allow him to live anymore,â€ one of the investigators quoted Qadri as telling them. â€œWhen I received the official gun in the morning, I immediately loaded and put it on the automatic burst.â€

More surprising still was the show of support for Qadriâ€”no longer is the virus of extremism confined to the illiterate, the poor and the backward mullahs. As he was brought to the court, Qadri was showered with rose petals by lawyers. A page was opened on Facebook praising him, and when the website blocked access to it, several sites surfaced elsewhere on the internet.

Qadriâ€™s disclosure prompted the authorities to detain 15 people, including three of his relatives and some of Taseerâ€™s other bodyguards. It has also been revealed that Qadri is associated with Dawat-e-Islami, a non-political religious group belonging to the Barelvi school of thought, and was earlier found â€œunfitâ€ for vvip duty because of his extremist views. He was reinducted to perform the sensitive taskâ€”whether inadvertently or at the behest of someone is, as of now, hard to tell. The fir in the Taseer murder case, though, says, â€œThe assassination took place with the assistance and conspiracies of religious and political factions.â€

Taseerâ€™s death came within a few days of a countrywide strike by religious parties against the governmentâ€™s plan to amend the controversial blasphemy law, often exploited to settle scores, grab property and persecute those who donâ€™t share the outlook of obscurantist mullahs. Derived from the British Penal Code, the law prescribes punishment to those who blaspheme Prophet Mohammed. The first blasphemy case dates to 1927; till 1984, another seven were registered. This law acquired its vampirish fangs through amendments in 1982 and 1986, imposing as it did severe punishment on those found guilty and rendering persecution easier than before. No wonder, the number of such cases ballooned to 986 between 1986 and 2010. At least 35 of the accused have been killed extra-judicially.

â€œIf the Prophetâ€™s followers kill someone opposed to man-made laws, then Pakistan is heading for barbarism.â€Asma Jahangir, Lawyer And Activist

In the days before the nationwide strike, some had named Taseer as a blasphemer for springing to Aasiya Bibiâ€™s defence. When she was sentenced to death in November 2010, prompting Pope Benedict XVI to call for her release, Taseer demonstrated considerable courage of convictionâ€”he proceeded to meet her at the Sheikhupura district jail. Later, he told the media that Aasiya had denied the charge of showing disrespect to Prophet Mohammed and Islam, and instead accused the men of her village of sexually assaulting and dragging her through the streets. Two days later, Taseer told a private TV channel that the blasphemy law is man-made and not God-given, that it had been misused against Aasiya, that falsely accusing someone of blasphemy was a greater offence than even committing it. He accused the clergy of instigating the masses against him.
Not accustomed to countenancing such open challenge to their stifling worldview, the Tehreek Namoos-e-Risalat, an alliance of religious parties supporting the blasphemy law, threatened to launch a prolonged agitation should President Asif Ali Zardari grant a pardon to Aasiya Bibi. They also demanded the removal of Taseer as governor of Punjab, a goal now achieved through the assassination.

Asma Jahangir, who heads the Supreme Court Bar Association, says, â€œIf religious extremists who consider themselves guardians of Prophet Mohammedâ€™s honour can go so far as to take the life of someone who had only opposed man-made laws, then Pakistani society is heading for anarchy and barbarism. The murder of Taseer shows that one can be the governor of the countryâ€™s largest province and an important member of the ruling party (the Pakistan Peopleâ€™s Party), but all of that can easily come to naught in front of a brainwashed individual who thinks that taking another manâ€™s life is a passport to heaven.â€

Even Taseerâ€™s bullet-ridden body awaiting funeral became a symbol of the schism between the liberals and orthodoxy. Hours after his assassination, over 500 Deobandi and Barelvi scholars praised Qadri and urged people to boycott the funeral ceremony of the â€œblasphemer or face the consequencesâ€. The prayer leader of Lahoreâ€™s historic Badshahi Masjid declined the administrationâ€™s request to lead the funeral prayers. (A PPP maulana ultimately led the prayers.) Rallies were organised in parts of Punjab to celebrate Taseerâ€™s death, and sweets distributed.

Despite the avowedly religious underpinning to Taseerâ€™s killing,Â  federal law minister Babar Awan of the PPP described it as a â€œpolitical assassinationâ€. He said it raised several worrying questions, including the inadequate security provided to Taseer. Even before Awan had spoken, the country was rife with conspiracy theories arising from what isnâ€™t a secret hereâ€”the Sharif brothers were known to have been at loggerheads with Taseer, a successful businessman with interests in media and telecom (he was the publisher of Daily Times and owned TV channels). Then Zardari weighed in, saying the killing of Taseer was aimed at terrorising the democratic forces.

Perhaps over the next few weeks the hidden hand that guided the killer of Taseer will be disclosed. For the moment, though, Zafar Hilali, a former diplomat, says his friend Taseer died doing what he wanted to do, and he died with his boots on. â€œThere was no other way that he would have wanted to go,â€ says Hilali. â€œTaseer would admit in his candid moments that hypocrisy, greed and deceit fuelled by incompetence had brought Pakistan to its current sorry pass. It worried him that in some of our cities there were many mosques but very few schools and factories. Surely, God is to be found in your heart, he once said, and not only in the mosque. But the answer, he used to say, is not to opt out but opt in. Not to flee but to stay.â€ Did Taseer succeed in his endeavour? â€œWe donâ€™t know, but what we do know is that Taseer gave up his life in attempting to do so. No one can ask for more,â€ says Hilali.

The assassination, says The Friday Times consulting editor Raza Rumi, is a cruel reminder of how Pakistanis are slipping into a morass of irrationality, with pernicious ideologies seeking to justify the process. He explains: â€œA target of the reactionaries, Taseer became a symbol of resistance against Pakistanâ€™s growing Talibanisation. His brave act of leading a campaign against Aasiya Bibiâ€™s sentencing rallied Pakistanâ€™s moderate Muslims, who felt emboldened by his courage. His murder is one more blow to Pakistanâ€™s liberals and moderates.â€

Days before his assassination, Taseer, whose aunt was married to the celebrated poet Faiz Ahmad Faiz, tweeted forebodingly, â€œI am under huge pressure to cow down before the rightist pressure on blasphemy. The extremists are giving me threats, they are using the name of Islam, they want to bring their own brand of Islam but I donâ€™t give a damn…even if I am the last man standing.â€ His Facebook status reads: â€˜R.I.P. Lion of the Punjab Salmaan Taseer (31 May 1944…04 Jan 2011)â€™ His web page lists his favourite quote: â€œHow can a man die better than facing fearful odds, for the honour of his country and the temple of his gods?â€ Here was a man who, in life as in death, lived up to his cherished ideals. Itâ€™s now for the living to fight his battle.

Between 1986 and 2010, 986 people have been charged under the blasphemy laws; 50 per cent of those are non-Muslim. None of the accused has been hanged.