Holi has a Muslim History too

Holi, being celebrated across India, may be the most colourful Hindu festival but it has a Muslim history as well.

Sufi saints like Hazrat Nizamuddin Aulia and Amir Khusrau in their chaste Persian and Hindi loved the festival. Emperor Bahadur Shah Zafar, whose Holi phags (songs) are relished even today, allowed his Hindu ministers to tinge his forehead with gulal during Holi festival each year. 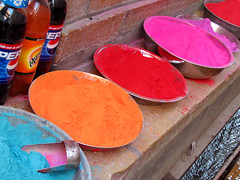 During the Shahjahani tenure of Delhi, Holi was known as Eid-e-Gulabi (Pink Eid) or Aab-e-Pashi (Shower of Colourful Flowers), and truly so owing to its carnival spirit and hysterical rejoicing for both Hindus and Muslims.

The nobles, kings and nawabs exchanged rose water bottles and sprinkled them on each other along with the frenzied drumming of the nagaras (drums).

This enlightened spirit percolated in the Mughals right from the time of the greatest Mughal emperor Akbar. Jahangir is shown holding Holi festivities in Tuzk-e-Jahangiri.

Many artists, especially Govardhan and Rasik, have shown Jahangir playing Holi with Noorjahan, his wife.

Mohammed Shah Rangila, in a remarkable painting, is shown running around the palace with his wife following him with a pichkari, or water cannon.

Such examples are umpteen in India’s cultural heritage; and this has been enriched by the harmonious amalgamation and assimilation of various faiths and ethnicities.

Mirza Sangi Baig in Sair-ul-Manazil narrates that the rollicking and frolicking Holi groups were alternately powdered and drenched till the floor had been covered with a swamp of crimson, yellow and orange colour, with the faces being multi- coloured, a spectacle very enthralling and exclusive.

Who says Holi is a Hindu festival? asks Munshi Zakaullah in his book Tarikh-e-Hindustani.

Zakaullah writes that the carnival of Holi lasted for days during the Mughal rule during which people, irrespective of religious or social distinctions, forgot their restraints. The poorest of the poor threw colour on the emperor.

Children’s Urdu monthly Khilona (March 1960) mentioned that during the days of Bahadur Shah Zafar, special arrangements were made for Holi festivities.

And Jam-e-Jahanuma, an Urdu newspaper (March 10, 1844), reported that on such occasions, both Hindus and Muslims joined hands.

(The above post is excerpted, with slight modifications, from different sites.)

35 thoughts on “Holi has a Muslim History too”