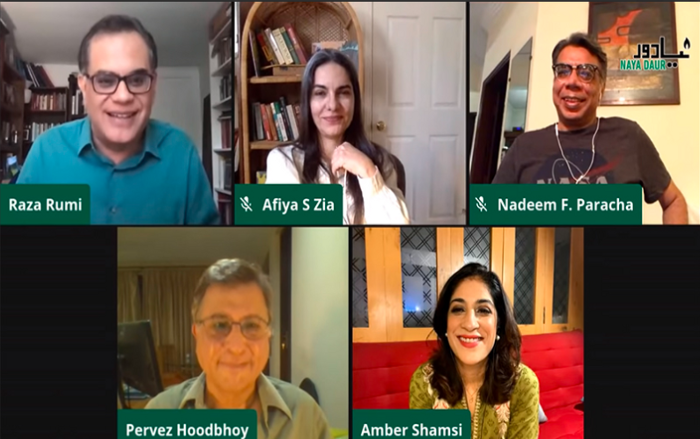 Laxmi Murthi writes about the new space in Pakistani journalism created by Naya Daur, a new media portal that upholds diversity of opinion and freedom of speech as its topmost ideals, while breaking away with entrenched taboos in mainstream Pakistani media and discourse. The following is an excerpt from Murthi’s article, as she gives an account of Naya Daur’s vision, genesis, and achievements since its inception in 2017.

Media outlets in Pakistan have mushroomed since private television was launched in 2007. But what passes as news is pretty much the same wherever you look. It’s a reminder that more voices lose their value when they don’t bring diversity to their audience. That’s a gap that new media startups like Naya Daur Media (NDM) are trying to fill by challenging the taboos of old media without paywalls or corporate advertising.

“It sounds grandiose,” says founding editor Raza Rumi, “but what we actually do is produce news and commentary that we believe is in people’s interest and what they want to know and think about.”

Pakistan boasts about 30 private television channels and over 4,000 registered newspapers with a combined circulation of about 20 million. But here’s the thing: most Pakistanis seem to be consuming more or less the same news. According to readership figures from Gallup Pakistan, in 2018, ten newspapers in the country cornered 86 percent of the readership. In fact, the top four newspapers grabbed 70 percent of the audience share and the remaining six had to make do with just 16 percent. The information ministry in April this year de-notified as many as 6000 “dummy” newspapers.

When Dawn News launched the first commercial TV network, there was a surge of hope that there could be a counter to the state-controlled narrative shaped by Pakistan TV (PTV). But far from living up to their promise of providing a credible counter narrative, competition with digital platforms and social media caused private television channels to enter a frenzied rush to remain relevant. As media analyst Adnan Rehmat says: “The sector has morphed into a cacophonous landscape of dozens of independent news and entertainment channels that frenetically vie for public attention.”

“The idea is to get those voices, filmmakers, videographers, to give space to engage with ongoing issues of Pakistan.”

Though inspired by “movement journalism”, he insists that NDM is not “just” a progressive platform. Their model of journalism aims to deconstruct hierarchies between editors, reporters and contributors and work collaboratively to both produce and present media content.

The full version of this article can be read here.

An erudite panel of academics and journalists talk about the

Murtaza Solangi and Raza Rumi discuss the situation of media