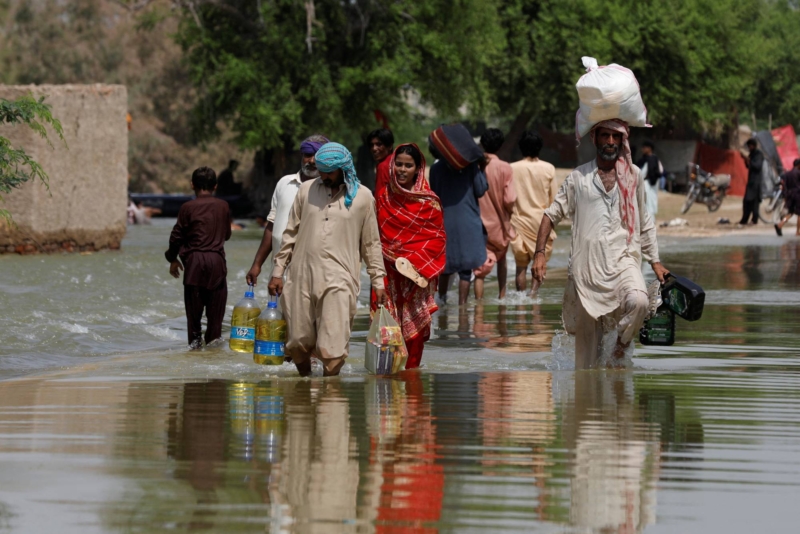 Strange things are happening. Two months after a natural disaster hit millions of people and created essential prerequisites for an economic meltdown, the focus of Pakistan’s ruling elite – elected and unelected – remains on power politics. As if the utter lack of preparedness to cope with a disaster was not enough, the response to the disaster and its monitoring by a holier than thou media is baffling. The primal cause of the post floods mismanagement, if were to believe the analysts on prime time TV and opinion piece writers from the press, is the corrupt clique headed by Mr. Zardari. Those with the most religious bent of minds have cited a divine wrath as a cause of this calamity. A few right wing newspapers have even blamed the United States and India to have caused this natural disaster to punish Pakistan for its nuclear weapons.

The genesis of such intellectual confusion and distortion of public debate lies in the way the Pakistani mind has evolved into a hydra-headed, paranoid and militarised being. This has been the greatest contribution of the Pakistani state to shape and craft a society that places a premium on nuclear weapons over citizen welfare and which demonises the political process and celebrates religious militancy as a just cause.

This is why militarism of a softer variety is back in full force. Undoubtedly, Pakistan army has done a tremendous job in rescuing people and ensuring that relief efforts are well-executed. However, this is neither unusual nor a matter of surprise as it happens to be an organised institution. But to apply this success in an emergency situation by a force trained to deal with urgent situations onto the domain of national governance brings back the central issue of Pakistan’s statehood: the unresolved and now perhaps a permanent civil-military imbalance. It started with the TV channels eulogising army efforts and creating a binary between the army and the civvies – a half truth and a rhetorical polemic with little substance. This was followed by calls for army intervention by the MQM and its nemesis, Mr Imran Khan. Luckily, for Pakistan the Generals appear to be in no mood to intervene and rock the applecart. Well, at least for now.

Once the threat of prospect of direct military rule was not given due attention, disguised formulae of indirect military rule have been propagated by the disgruntled among the political class and TV anchors. Debates have been held on Gen Kakar formula, the Bangladesh model of technocratic supremacy or a national government comprising the clean politicians. Sadly, judicial activism, howsoever earnest it might be, has not helped either. The reopening of NRO implementation debate, preceded by the interim orders on the 18th Amendment case, has created a situation of uncertainty and a near-collision between the executive and the judiciary. Mercifully, a showdown has been avoided in the short term.

Even prior to the floods the basic issues of economic management, political governance and terrorism had haunted the body-politic and continue to do so. However, the remarkable apathy that has been displayed by those who matter to ‘real’ issues once again shows the inherent culture of a post-colonial state which abandoned the reform agenda in the 1970s and since then has been eaten away from within and by geopolitical imperatives to literally prove Jinnah’s anguish on having created a ‘truncated’ and ‘moth-eaten’ Pakistan.

In these circumstances, reform and social change are often confused with change of faces and which group of rent-seeking and patronage-doling elites should share power with the permanent establishment i.e., the military-bureaucratic complex, the big business and ‘foreign’ interests in Pakistan.

It is, therefore, critical to speak of a reform agenda for Pakistan and argue that the long-neglected agenda of state-building should now dominate public discourse. Let us recount the key five issues that require the attention of Pakistanis, their rulers and international partners.

Political stability: The search for stability is now a clichè and almost an unachievable goal in Pakistan. Having said that, it remains a paramount objective. The fragile democratic government has to be allowed to complete its tenure. It may reshuffle the cabinet, change the Prime Minister or even elect another set of coalition parties to govern but there is little use in repeating past mistakes through unrepresentative experiments in governance. They have never delivered in a factionalised, diverse and tense federation. Pakistan’s key institutions – the army, judiciary and the parliament – stand to gain if they resolve to keep the system intact.

Economic recovery: Nothing is more important to revitalise the economy at this juncture. A low economic growth rate (0-1 percent) and high inflation (25 percent if efforts are not made to improve the situation) are a disaster formula given our needs and population explosion. The illogic of raising taxes and improving collection makes little sense as tax-collections cannot rise in times of recession. More importantly, the incentives for domestic investment need to be restored as we are now chronically suffering from a low savings (18 percent) and investment rate compared to so many other economies. Aid may be necessary in the short term but focus needs to shift on trade and the national security state will have to change its course and look eastwards and trade with India for immediate boost to small-scale manufacturing, agro-based industries.

Energy rents: Pakistan has been mired by its national security paradigm when it comes to forging regional alliances for energy trade. A decade has been lost quarrelling over minor details and putting bilateral issues with India before everything else. It is essential that the energy-deficient India is now used as a huge opportunity by the Pakistani state to achieve major growth gains and employment in the immediate term. The various pipelines and energy corridors earlier planned now need to be put into place. Yes, Balochistan is a problem but what stops the federal authorities to engage with the separatist leaders and allay their concerns and fears.

Full implementation of 18th Amendment: Related to the above, the political class has made a historical beginning by correcting the earlier wrongs through devising a new framework for federal governance. It should be a priority but a government on a life-boat can hardly achieve that if the opposition does not work with it. The provinces have to fast-track their capacities and institutional reform to take additional responsibilities. In fact, post-flood reconstruction provides a unique opportunity for the provinces to put their institutions in order, devolve more power to the local level and create lean and efficient provincial governments that can deliver and not just collect and pocket rents. The redundant provincial departments need to be abolished and capacities should flow to the local level.

Anti-terrorism efforts: It would be a non-starter if the PPP-ANP combine continues to be at the forefront of countering militancy. The government will not succeed if PML-N and other political forces do not join hands to fight the biggest menace of our times.

Social protection and youth: Given the alarming rates of poverty and a youth population, it is essential that the state must arrest an impending social holocaust and focus on these vital areas and undertake programmes which cater to the young, poor and the marginalised sections of Pakistan. This is vital to achieve higher rates of economic growth as well as realignment of national priorities and considering the dangers that afflict Pakistani society.

In conclusion, the Pakistani state needs to address issues that cast a dark shadow over its future. The media and the chatterati need to take stock of the actual crises rather than glorify palace intrigues and monitor power-politics.