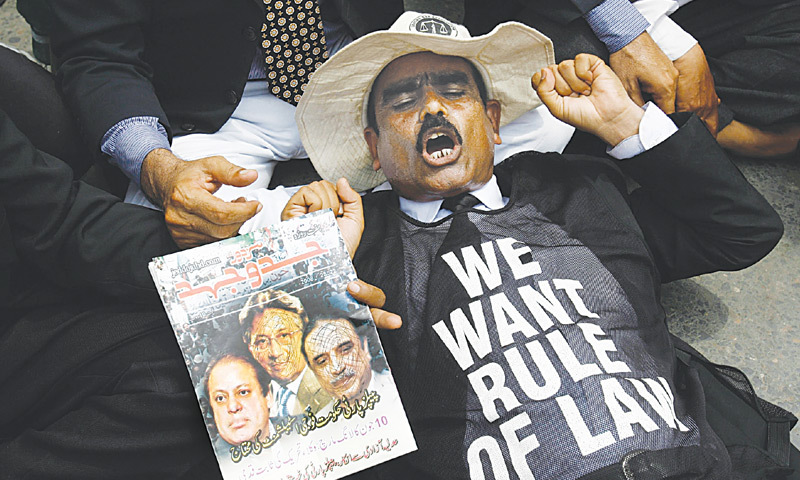 I am appalled by the recent events that have yet again stirred instability and uncertainty into Pakistani politics. Those of us who voted in last year’s elections expected that the political leaders and Pakistan’s political elites would learn a lesson from our unfortunate history.

We also expected the lawyers’ movement, headed by men of extraordinary calibre, to display sagacity and vision and contribute to the consolidation of a democratic culture. However, what we witnessed was a complete rejection of the Feb 18 polls by the leading lights of the movement, and a few other naìve political actors. When the electorate voted in large numbers and returned the two mainstream political parties to the parliament, the lawyers, instead of accepting that they were wrong to boycott elections, insisted on their narrow and bourgeois interpretation of the term “rule of law.”

Sadly, law, rights and constitutionalism are personalised through the idolisation of the deposed chief justice, as if Pakistan were still a mediaeval kingdom, where the bad King (Musharraf) had to be overthrown, and the good Qazi (Justice Iftikhar) had to be “restored” and vested with all moral, political, executive, military and judicial powers.

The rightwing media has further whipped this game and brought the popular and well-meaning Sharif in direct confrontation with the federal government on this single issue. President Zardari, whom we all hoped had learned his lessons from jail, endless court trials and exile, would act with vision and leadership. Similarly, the Supreme Court, led by Justice Dogar, might have gone an extra mile to prove its neutrality. Alas, how wrong we were!

It is amazing that the long marches, threats of violence and agitation, and questionable imposition of the governor’s rule in the largest province of the country are taking place at a time when the Taliban are capturing one district after another. The media and civil society, instead of bringing down the creaky edifice of democracy, should be pressurising political leaders to act with maturity and not wrangle.

Given the hysteria of the last few days, since the disqualification of the Sharif brothers, the media is portraying the situation as one with no solution. Enemies of democracy, the traditional forces that have always sabotaged civilian rule, are smiling at this imbroglio. There is no paucity of solutions: there are legal and constitutional means whereby the legislature can amend the Constitution on the eligibility of politicians to contest elections and hold offices. A review petition can always be filed that could look at the questions of law pertaining to this matter. Similarly, the promulgation of another NRO is not beyond the realm of the possible. Politics is about bargains and adjustments to strengthen the representative system, rather than bringing it down at every inconvenient juncture.

The PPP must take the initiative to avoid further fissures in the tenuous federation called Pakistan. The current posturing and gung-ho behaviour of the PPP’s Punjab leaders need to be arrested by the central leadership. The PML-N and, in particular, its Quaid, Mian Nawaz Sharif, should also rise above the rhetoric of the 1990s and display flexibility that is essential to a functional democracy. The PML-N has little support in the three smaller provinces of Pakistan and its current rhetoric and thundering against President Zardari, who represents the smaller federating units, is not a good omen. A group of political activists torched the memorial of Benazir Bhutto in Rawalpindi, and there have been strong reactions across the country, especially in Sindh. Why blame the bomb blasts at funerals and mosques when such is the prevalent culture of protest.

If the deposed chief justice has to be restored then the matter must be brought before the parliament and solved through constitutional means. One cannot play the politics of constitutionalism and find solutions in executive orders. If Mr Sharif will lead an agitation with the lawyers who are now placed on the other side of the democratic divide, he will not only engineer the fall of the central government, and the PPP, but will also sign the deed of death for the future of democratic politics in Pakistan.

Over fifty deposed judges have taken fresh oaths under the policy of the sitting government. When the incumbent judiciary is trampled and defamed, the detractors forget that it includes all those judges who resisted Musharraf’s emergency. Once an individual is restored to the top slot, will it become legitimate overnight or the incumbent judges would be fired for being part of the “naqli” judiciary?

The civic activism since 2007 was a harbinger of change in Pakistan. The lawyers’ movement is de-legitimising democracy and political parties (including the largest and perhaps the only national party). One may ask whose purpose is being served here. Is it not what the leaders of the Taliban and other extremist groups maintain about democracy by calling it “kufr”?

The establishment and its proxies must not win this game. At present it seems that both the mainstream political parties and their obstinate leaders are bound to create a situation similar to 1958, 1977 and 1999. However, this time the cost of unrest and confrontation will be detrimental to our future. The vicious cycle, emanating from our inability to handle political squabbles, will this time give way to erosion of democratic space won today with sacrifices, toils and struggles.

Published in (The NEWS)