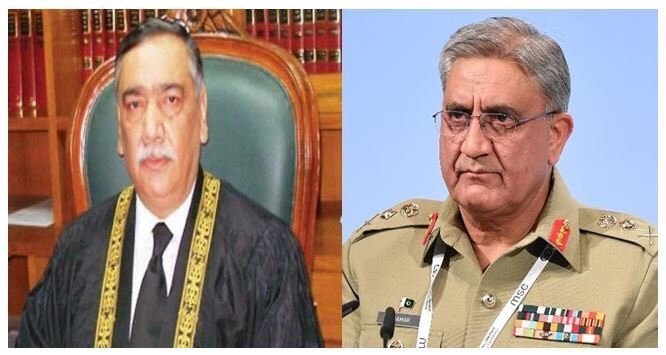 Institutional wrangling, botched up decision making of the federal government have thrown the country into another phase of political uncertainty.

Supreme Court’s decision to suspend notification of COAS General Qamar Bajwa’s extension in service was both unexpected and unprecedented. General Bajwa and other parties including the Defence Ministry have been made respondents and asked to appear before the court. This is no ordinary development and whatever the outcome of the verdict tomorrow, it will have far reaching consequences for the polity.

First, the judiciary has asserted itself. After the recent public exchanges with the prime minister Imran Khan wherein the Chief Justice of Pakistan (CJP) told off the PM and reminded the country that it was not the same judiciary that followed executive diktat. This was rather unusual but the apex court had given a clear message: there will be no business-as-usual. PM Khan’s attempt to blame the judiciary for Nawaz Sharif’s exit backfired. And now the judiciary has further embarrassed PM Khan and the manner in which he is running the country.

Secondly, the recent decision cannot be delinked from the ongoing case against former President and Army Chief General Pervez Musharraf. The PTI government had filed an application asking for a review of the case and delay in passing a verdict. The Chief Justice of Pakistan (CJP) in his speech last week had hinted that Musharraf’s case was important for changing the course of constitutionalism especially with respect to the role of the Supreme Court as the guardian of the constitution. The government’s action to delay this case may have annoyed the CJP.

Third, regardless of the larger political context, once again the incompetence of Imran Khan led government has been exposed. The ministers are to be blamed for the procedural loopholes which were totally avoidable.

This is not the first time Imran Khan’s team of ministers and advisers has embarrassed him. The condition of surety bond placed on former PM Nawaz Sharif’s departure from the country which was later dismissed by the court was another  instance of PM Imran Khan’s advisers mishandling the situation. This incompetence is hardly surprising given that Imran Khan has himself on one occasion admitted that he did not get a capable team.

Fourth, the legal lacunae pointed out by the court may have been fixed by the government after the emergency meeting of the cabinet. Two issues are faced by a government that appears clueless. The cabinet has amended the Army Regulations to include provision for ‘extension in tenure’ of army chief but the court would have to be satisfied whether legal amendments can be made in relation to a sub judice matter. Former Law Minister Farogh Naseem has resigned from his post to represent COAS Bajwa as lawyer. Questions have been raised about the license of Mr Naseem whether he can argue before the court.

But the government will not only have to explain the procedural flaws when it goes to court tomorrow, but also for the rationale behind the extension. Chief Justice Khosa has also questioned as to why the extension was needed: “If at all there is any regional security threat, then it is the gallant armed forces of the country as an institution which are to meet the said threat and an individual’s role in that regard may be minimal.”

Lastly, the future scenarios are fraught with problems as the court has virtually opened a can of worms. If the SC restores the notification then Gen. Bajwa continues as the COAS for the next three years. This may give a temporary respite but it would leave a dent on the public standing of the institution that traditionally has called the shots.

In the event that the SC upholds the suspension there will be a fresh appointment and the current arrangement in Islamabad might change sooner than later. This will also begin a new phase of uncertainty in the country as the incoming Army Chief would formulate a “doctrine” of his own. And that may not include the civil-military actors being on the ‘same page.’

Another scenario entails Gen. Bajwa refusing to accept the extension and opting for an honourable exit without court proceedings. But this is unlikely given that former law minister intends to represent the General before the Supreme Court on Wednesday.

Given Pakistan’s current economic woes, worsening governance and political polarisation, it is imperative for all institutions, including the judiciary, to work out a smooth resolution of this new crisis.

My new piece published by The Friday Times While the

According to Raza Rumi, there are three possible outcomes of