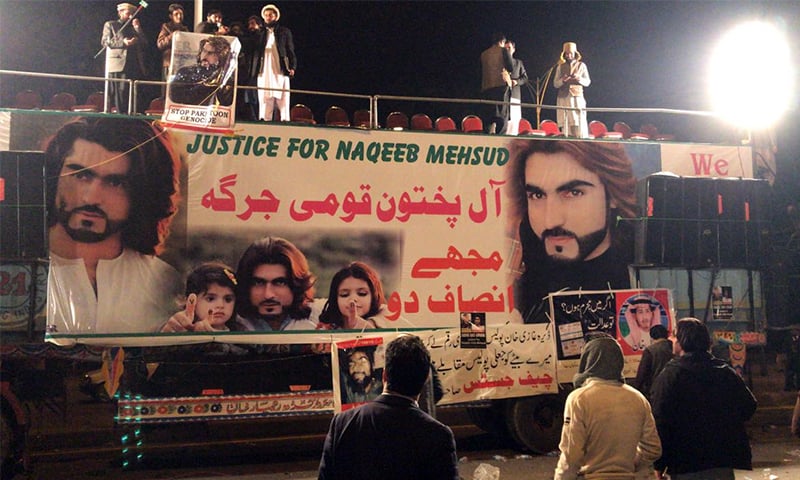 A stage is set up in Islamabad during the protest demanding justice for Naqeebullah Mehsud.— Photo by Shakeel Qarar

This past fortnight Pakistan witnessed unprecedented mobilisation by the youth of tribal areas. Thousands protested seeking justice for Naqeebullah Mehsud brutally killed in a fake encounter by Karachi police — all in the name of counter terrorism. Mehsud’s death sparked national outrage and it soon became a metaphor for the historic injustices meted out to residents of tribal areas and the way millions have faced conflict, displacement and landmines since the start of US-led war on terror aided by Pakistan’s elites.

The protests are over for now after assurances from the government. But the movement for justice has just begun.

For 10 days, the youth of FATA were joined by many others within and outside the country. What started as a Mehsud Tahafuz Movement for cleaning of landmines in Waziristan turned into Justice for Naqeeb Mehsud movement after his extra-judicial killing in Karachi. The tribal maliks (or elders) from North and South Waziristan also joined them.

Organised by a youth activist, the protests remained peaceful, and resisted the control of any organised political factions. The mainstream media especially the TV channels repeated their odious practice of selective hysteria. For days, TV channels did not cover the protests. This was curious given the same band of reporters, anchors and media owners were eager to give disproportionate coverage to protests against the elected government[s]. Most recently, in November 2017, a pack of clerics received inordinate coverage and some even supported their acts of violence when the government tried to disperse the protestors.

Multiple jurisdictions and legal systems, discriminatory laws operate in the same country and create classes of citizenship. The people of FATA continue to be treated as second-class citizens and all talk of ‘reform’ founders at expediency of the civil-military elites

But this was not altogether unexpected. Much of what was said during the Pashtun long march and sit-in challenged the carefully nurtured myths about Pashtuns popular in ‘mainstream’ Pakistan. The ‘other’ told its story and reminded of the national disregard for the lives and livelihoods of Pashtuns. The aerial bombardments, forced displacement, and the encouragement and havens provided to violent extremists in FATA and KP over the years as part of the defence strategy. These stories are hard to tell on TV screens that are closely monitored and operate under unwritten but widely accepted norms of self-censorship.

Fazal Khan Advocate, father of a child who was killed in the 2014 APS attack by the Taliban, delivered a moving speech in which he raised the most pertinent question: since Pakistanis ‘own’ the national military, why should they not question its policies, especially when they have grave consequences for the citizenry? And he rightly cited the case of Eshanullah Eshan, former commander of Pakistani Taliban, who, for all practical purposes, is a ‘state guest’ while the parents of slain children in Peshawar attack seek justice.

It is a shame that successive regimes in Pakistan have continued the imperial policy of keeping FATA and its peoples as colonial subjects in ostensibly an ‘independent’ country claiming to own a constitution and international human rights’ obligations.

Last week, I wrote about the fast changing nature of Pakistan’s social and political landscape. The Pashtun long march and its 10-day long protest in Pakistan’s capital Islamabad testifies to how the marginalised are negotiating the contradictions of today’s Pakistan. The state structures are moribund and outdated. Multiple jurisdictions and legal systems, discriminatory laws operate in the same country and create classes of citizenship. The people of FATA continue to be treated as second-class citizens and all talk of ‘reform’ founders at expediency of the civil-military elites.

Youngsters from tribal areas are less willing to engage with the state structures as their elders have done in the past. Such differences were reported towards the end as the younger activists were unwilling to end the protests without written agreements. The way the youth of FATA view their predicament is also shaped by their individual and collective experiences. Manzoor Pashteen, the organizer of the long march, reportedly said, ‘I am safer on this road in Islamabad than my house in Waziristan’. This is true for many, many others.

A large number of FATA residents are internally displaced and now live in cities such as Karachi and urbanizing parts of KP. The marginal and the mainstream are not so distinct. New media, as evidenced during the Pashtun long march, have freed the youth from the earlier imperatives of gaining the attention of the ‘mainstream’ to make their voice heard. More importantly, a decade-long civilian interregnum has created a relative openness for such mobilisations to take place.

Such growing spaces also allow for contestations of state-approved political alignments. The full embrace of Pashtun identity by the protestors in Islamabad challenged the historic imposition of a hegemonic ‘national’ identity. For decades, segments of Pashtun elites have played along with the civil-military power wielders to further a sanitised nationalism but it seems that the younger generations are challenging that. Ethnicity-based politics will remain a reality and it needs to be accepted by powers-that-be. Democraticsation, howsoever flawed it might be, enables reconciliation of multiple political and social identities.

Efforts to suppress information flow failed with this impressive mobilisation. The taboo subject of missing persons is back in the national conversations. Muzzling information and punishing those who reported on it has not worked. It is imperative that the national political parties, the military and traditional media adjust to what is changing in their fiefdoms.

There is still a protracted battle for justice, democratisation and pro-people notions of security to be waged. The young Pashtuns have shown the way.

State effectiveness, by most definitions, has been waning in Pakistan.