Lahore blasts and the Jihad industry

My city Lahore wasÂ attacked yet again by the pusillanimous attackers pretending to be brave and honourable. There is no justification and no excuse for this modus operandi. And it should not be tolerated by the state and the people. Any excuse would legitimise this reign of terror..

Leaders of Salafi-jihadist organisations hypocritically preach about the benefits of martyrdom, but rarely, if ever, conduct suicide operations themselves, or send their loved ones on such missions. It is a fact that Al Qaeda and associated groups offer no vision for Muslims other than perennial jihad, hardly an appealing prospect

Jihad is now an industry among scholars, including those who masquerade as scholars but are actually in the service of more shadowy outfits, and those who believe that by blowing up people praying in mosques or families out shopping, they will not only serve God but win a point-to-point ticket to the pastures of heaven where seventy-two swooning virgins await their arrival. 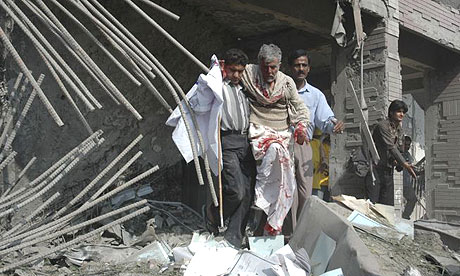 The tabloid approach to jihad in particular and Muslims in general, being easy, is often employed by the Western media. There is also an epidemic of books aimed at denigrating Islam and simply ignoring or distorting its spiritual majesty, the magnificence of its history and its contribution to civilisation.

The easiest thing to do today in America is to publish a book on Islam, but the book has to be negative and it has to reinforce existing prejudices. The basic idea is to equate Islam with violence and to prove that it is not a religion of peace at all, as it advocates the establishment of a khilafat where the infidels will either be liquidated, or converted or reduced to the status of serfs.

Unfortunately, it is not the work of the serious scholar that now defines Islam in the West but the words and deeds of the lost tribe of jihadis. Islam has been hijacked by the prototype represented by Osama bin Laden and his like. They have become its image-makers and they are the ones viewed by the non-Islamic world as its real representatives. That is the fight, and it is a fight that Muslims first have to win from among their own ranks.

But to maintain that there is nothing rotten in the state of Denmark is to ignore reality. How can a remedy be found without first recognising that there exists a condition that needs a remedy?

One serious and scholarly publication that has come up with incisive analyses of the phenomenon of terrorism and what ails many Muslim societies is brought out by the Combating Terrorism Centre at West Point, the famous US military academy.

Its monthly publication, CTC Sentinel, declares on its masthead that it is objective, relevant and rigorous.Â Tall though the claim may sound, the Sentinel does make an earnest effort to be all three. The current issue carries two worthy articles, one on the return of the ArabsÂ to Afghanistan and the other on Salafi jihad as a religious ideology.

Brian Glyn Williams, an American university professor who studied at SOAS, London, makes what he calls a preliminary effort to sift through vague rumours in order to gain a clear picture of Al Qaeda’s actual role in a Taliban guerrilla war that has, to all outward appearances, morphed into an Iraqi-style terrorist insurgency.

He concludes that while it is difficult to estimate the number of Arab fighters in the region, it seems obvious that Al Qaeda central is determined to play a key role as a fundraiser, recruiter and direct contributor to the military efforts in both Afghanistan and Pakistan.

Moreover, unlike the earlier generation of gucci jihadistsÂ who made little if any real contribution to the jihad against the Soviets, the current generation seems determined to remind the West that the Lions of Islam have not forgotten.

According to Williams, since 2002, one of Al Qaeda’s main roles has been diverting wealth from the Arab Gulf States to funding the struggling Taliban. One recently killed Saudi shaykh named Asadullah was described as the moneybags in the entire tribal belt.Â Men like Asadullah have paid bounties for Taliban attacks on coalition troops, provided money to Taliban commanders such as Baitullah Mehsud to encourage them to attack Pakistani troops and launch a suicide bombing campaign in that country, and used their funds to re-arm the Taliban. Local Pashtuns in Waziristan and in Afghanistan’s Kunar Province have claimed that the Arab fighters pay well for lodging and food and provide money for the families of those who are Ã¢â‚¬Å“martyredÃ¢â‚¬Â in suicide operations.

But there are also tensions between the Arabs and the Afghans, to ease which, Mustafa Abu-Yazid, the Egyptian head of Al Qaeda’s operations in Afghanistan, has proclaimed that he recognises the authority of Mullah Omar.

Assaf Moghadam, an Islamic scholar, in his analysis of Salafi jihadÂ argues that it is more akin to an ideology than to a religion because like other ideologies it is a by-product of the industrialisation that swept through Europe, beginning in the 19th century and is hence an outgrowth of modernity. It is intimately linked to the dislocating and turbulent effects of globalisation, which introduced rapid changes in the social, political and economic realms of life.

The Salafi-jihad is an ideology because its functions are essentially congruent with those of other ideologies. Analogous to the first, explanatory function of ideology, the Salafi-jihadists goal is to raise awareness among Muslims that their religion has been on the wane. Whereas Islam used to be at its peak during the first centuries of its existence, Salafi-jihadists urge Muslims to understand that the tide has turned, and that Islam is in a constant state of decline in religious, political, military, economic and cultural terms. Salafi-jihad provides a new sense of self-definition and belonging in the form of membership to a supranational entity.

Finally, according to Moghadam, like all ideologies, Salafi-jihadists present a programme of action, namely jihad, which is understood in military terms. They assert that jihad will reverse the tide of history and redeem adherents and potential adherents of Salafi-jihadist ideology from their misery. Martyrdom is extolled as the ultimate way in which jihad can be waged hence the proliferation of suicide attacks among Salafi-jihadist groups.

Westerners are commonly described as infidels, while moderate Muslims and Arabs are labelled apostates. To the most extreme Salafi-jihadists, Muslims who reject the tenets of Salafi-jihad are tantamount to infidels, thus deserving of death. They interpret their violence on other Muslims as religiously sanctioned, ignoring sections of Muslim holy texts that prohibit internecine fighting or the killing of civilians. They single-handedly blame the West for each and every misfortune that has befallen Muslims.

Moghadam urges the United States and its allies to understand that they are not facing the religion of Islam as their main enemy, but an ideology, namely the Salafi-jihad.

It is equally a fact, he maintains, that leaders of Salafi-jihadist organisations hypocritically preach about the benefits of martyrdom, but rarely, if ever, conduct suicide operations themselves, or send their loved ones on such missions. It is a fact that Al Qaeda and associated groups offer no vision for Muslims other than perennial jihad, hardly an appealing prospect.”

Next Post
Bulleh, the Beloved is hidden and sits aside

81 thoughts on “Lahore blasts and the Jihad industry”