Saira Wasim is a prominent Pakistani miniaturist. I found a link to her website hidden in my unread emails. Some of her recent paintings are terrific. The image on the left is borrowed from here.

“Teeming with figures captured in mid-action, paintings by Saira Wasim present grand narratives. If it werent for their petite size and two-dimensionality, they might be mistaken for Greek mythology, Baroque opera, epic film, or other monumental genres. Yet, these small paintings represent a singular creation, one that transcends any individual medium or genre. In Wasim hands, the centuries-old format of the miniature painting has been transformed into a stage for human drama, a jam-packed cinematic space that approaches the grandeur of Cecil B. DeMille and the glamour of Bollywood. Like the protagonists of such grand genres, Wasim characters gesticulate, prance, shoot, and fly in majestic style. They laugh and boast in hideous fashion, and morph into grotesque hybrid creatures that hint at transcendent themes of good and evil.”

For instance see this powerful representation displayed on her website with the lyrical title, Lamentation of Innocence (Genocide),2005

One of the paintings – Â Buzkashi – narrates a tale of contemporary Pakistan. The depiction of political and social undercurrents may be “subjective” but her work surely adds a new dimension to political art from Pakistan. Wasim’s websites states: “Buzkashi (literally means goat-grabbingÂ) is an ancient game, national sports of Afghanistan and also played in many parts of North West Pakistan. It also called wildest game on earth. Here Buzkashi is a metaphor of Pakistani politics, where every leader grabs for control of the country and every stronger wants to rule the weaker …”

The image on the left – Friendship After 11 September 1, (2001) found here – contextualizes and comments on the close relationship between Pakistan’s President General Musharraf and the US President after 9/11. There is an eclectic mix of realism, comedy and circus – there is movement and drama alive in the miniature format. 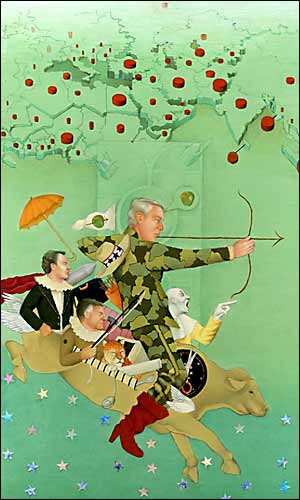 And this one is my favourite:Â Mission Accomplished showing George Bush riding a cow with Tony Blair and the Pakistani President. South Asian motifs blended with strains of Western art, this painting cleverly sums up a myriad of perceptions and reactions to this tripartite alliance on the global scene. The image has been reproduced from the BBC website.

Wasim is expanding the frontiers of the traditional genre of miniature painting. It is a tremendous service to keep this art form alive and relevant.