It was only yesterday that we were mourning for the loss of an icon of our times. The much loved, and passionately hated Benazir Bhutto whose tragic murder in broad daylight was the greatest metaphor of what Pakistan has turned into: a jungle of contested history, ethnic conflict and extremism. Little wonder that Bhuttoâ€™s worst enemies cried and lamented the loss of a federal politician whose life and times were as unique as her name. The populist slogan â€“ charon soobon ki zanjeer (the chain of the four provinces, literally) could not have been truer than the most tested of axioms. As if her death were not enough, the state response was even more brutal. Why did she participate in public rallies? On that fateful day of December 27, 2007, why did she invite death by sticking her neck out â€“ literally and metaphorically? This was tragedy compounded by invective and betrayal. After all, had she not received a tacit understanding from the then military President, General Pervez Musharraf?

The official machinery then went to work in a super-efficient frenzy. Within hours, the murder scene had been washed away, right opposite the Liaqat Bagh in Rawalpindi where Pakistanâ€™s first Prime Minister, Liaquat Ali Khan, was also shot dead. If anything history repeated itself with a bang â€“ only to restate that Pakistani Prime Ministers are dispensable accessories of the power game. The misogynistic thirst for blood-letting once quenched, patriarchy dictated that the autopsy of a woman became an issue of honour, confusion and violation of the law. How telling, that the laws of the land remain subservient to the imperatives of culture and tradition.

Within a day, Pakistan shook and the world also felt the tremors from an already stinking cesspool of violence, terror and

global mischief. Many Pakistanis think these labels are of imperialist manufacture, reeking of hogwash. But the case has been made: Pakistan is a rogue and failing state and no one is safe.

The year that followed this â€˜Himalayanâ€™ tragedy has also witnessed bitter ironies of our times. An election was held in February after all, returning BBâ€™s party to power and her husband ascended the throne of Islamabad with the smaller provinces fully backing him. While all of this political capital has been realised by her party and its semi-autonomous government, the investigation of the murder has remained suspended by fear of facing the demons within Pakistanâ€™s body politic and by a classic passing of the buck to the United Nations, an unwilling, doubly inefficient and disinterested investigator.

Perhaps this is why the cult of Bakhtawar, the brave Sindhi peasant woman, has been reinvoked in Sindh and the dispossessed rural poor relate to this plight of an otherwise, rich, glamourous, and famous leader. The last moments of her life with a hand waving gesture frozen in time, have added to the cultural premium on martyrdom. That BB was passionate and good-hearted is not the point. She was more endowed with emotional gusto and courage than many male politicians. Three political phases defined her career: a decade of struggle against the dictator General Zia ul Haq in the 1980s, another decade of power, ignominy and isolation; and the last decade of exile, re-emergence and populist redemption. All these phases share a common trait: her steel-nerved nature and commitment to sticking to her guns. Even when the world told her that her nearest and dearest had destroyed her image through dubious deals, she remained pretty steadfast in her position and rarely backtracked from it. But it was the deeply embedded tragic flaw, a trait shared by mythical characters, of finding and defending misguided friends and allies that ultimately booted her out of power. 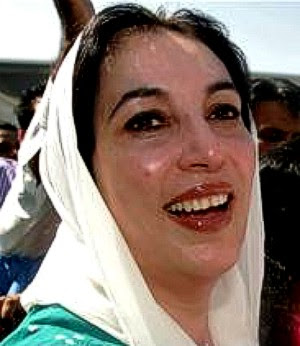 Or at least that was the excuse. As we well know, there is an embargo on politicians thinking of, less plotting, systemic change. Zulfiqar Ali Bhuttoâ€™s fate at the hands of the military was there for all to see. But even normally quiescent and occasional challengers like Benazir Bhutto and Nawaz Sharif were not tolerated as assertive Prime Ministers. So Ms Bhutto compromised and compromised some more and became an adept player at realpolitik. By 2008, the progressive elements of the middle class, the urban constituencies of the Pakistan Peopleâ€™s Party had moved on from the PPP â€“ for some Nawaz Sharif became the symbol of urbanity and modernity, and for others, the lawyersâ€™ movement was the ultimate panacea for Pakistanâ€™s unjust structures. In addition, many young men veered off towards the folds of extremist ideologies for a sense of identity and in search of livelihood and survival in an anarchic society.

This is why there were such histrionics about the alleged deals with the US and General Musharraf in 2007 aimed at securing her safe return to Pakistan. We still donâ€™t know the truth. But if author Ron Suskind is to be believed then the deal was pretty much a low bargain for poor BB. She urged Vice President Dick Cheney time and again to urge the Musharraf administration to provide a credible security cover. Apparently such exhortations went unheeded and the guarantees and guarantors filled in the jigsaw of a betrayal game. Or was it the alarming naivetÃ© of a towering woman with a sharp mind that she believed in them, in the first place? Historians will have a hard time figuring this out, given the mess of history, politics, and imperialism, not to mention the complex personality of the late Benazir Bhutto.

Ultimately what needs to be recognised is that BB was a Pakistani politician who had to be understood and judged within her own context. For decades, especially since her return to Pakistan in 1988, millions of people projected their idealistic and unrealistic political expectations on to her persona. As if somehow she were above and beyond the troubling confines of Pakistan, as if she were a myth in her own lifetime. In the end, she was a flesh and blood character with strengths and flaws; her charisma, naivetÃ© and astute political sense, her quest for power, all jostling within the same personality. On that incredible morning of December 28, 2007, when the realisation of a Pakistan without BB struck the minds and hearts of Pakistanis, did it begin to sink in what she had meant to us. There was a wave of unprecedented mourning â€“ far greater than bestowed upon her father, whose death was celebrated by many sections of Pakistani society. Benazir had been part of the lives of Pakistanis for three decades. And whatever her record in governance, there was always the hope with millions of Pakistanis that she could redeem her promise. All that, and her outstanding courage in the midst of adversity, her humanity (she was not vindictive like her father), her frailty and the barbarity of a country that cuts down its most gifted in the prime of their lives, is what united Pakistanis in a surge of grief. It was as if we had lost part of our history.

But what are we to make of her legacy? Her critics had always imagined her to be outside the mainstream parameters of Pakistan, since hers was a political existence shaped by patronage, ethnicity, corruption and an all-powerful establishment. BBâ€™s fundamental identity and relevance stemmed from the fact she was Pakistani at the end of the day. For better or worse, she kept herself relevant and central until there was no option but to kill her. This is why Tariq Aliâ€™s unkind cuts, Darlympleâ€™s complaint of her being a feudal are all understandable if viewed within the larger context of her hydra-identity. She was a woman, a pragmatist like every male politico in Pakistan, a feudal and an urbanite, a Westernised woman as well as the daughter of a small Sindhi village called Garhi Khuda Bux, which she now rests in peace.

On the record of her governance, there was much that could have been avoided. Her inexperience in her first stint of twenty months and her calculated deference to the military in her second term left many Pakistanis disappointed. None of this was lost on her because, as far as her ego would allow it, she made oblique reference to â€˜mistakesâ€™ in the final years of her life. Nevertheless, five years in power in a political career spanning three decades is way too short a time to make definitive assessments. On the negative side, she gave up too easily on the structural changes that her party stood for; and her inability to contain corruption in her governments was glaring. On the positive side, the creation of the successful First Womenâ€™s Bank, her outreach to India in her first term, her tolerance for a free press and her support for General Musharrafâ€™s Womenâ€™s Empowerment Bill are well known. Also well known is the fact that she was a bulwark against the forces of darkness, a truly federal democrat and a non-vindictive power-wielder. But assessments of BB will remain partial and incomplete until we achieve a collective emotional distance from those lost years of the 1990s when the establishment undid the civilian order and laid the foundations of todayâ€™s dysfunctional Pakistan, and brought it to the brink of failure. There will come a time when such assessments will be made without cavil, for even if Benazir Bhutto agreed to work with the national security imperatives of governance and was willing to compromise time and again, the unraveling of Pakistan can be dated as commencing from her death at the hands of a suicide bomber on December 27, 2007.