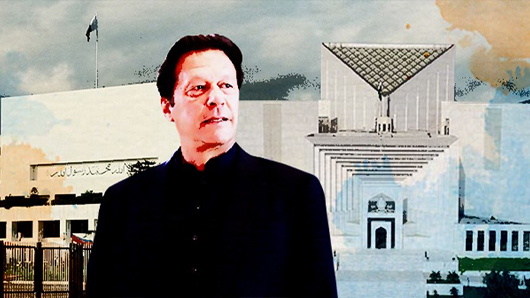 Systemic shocks such as the one designed and executed on Sunday, if not remedied by the judiciary, will normalise fascism and set dangerous precedents for years to come.

Political instability has transformed into total constitutional chaos in Pakistan. In a clear case of constitutional subversion, a prime minister who had lost the majority dissolved the National Assembly shortly after the Deputy Speaker did not allow the vote of no confidence to take place and virtually termed the opposition benches as traitors to the country.

This flimsy excuse to derail the democratic system is nothing new in the Pakistani context. If anything it is reminiscent of the original sin of 1954 when the then Governor General Ghulam Muhammad dismissed the Consistent Assembly. That particular extra-constitutional intervention has been noted by scholars such as Allan McGraith as the ‘Destruction of Democracy’ and sadly the country has not moved on since then.

Imran Khan, a poster boy of the hybrid regime, has employed this authoritarian tactic in 2022. Except that Khan, technically speaking, was ‘elected.’ Evidently that means little for him and his cronies who in the past four years have run the government through ordinances and reduced the parliament to a non-entity.

Pakistan’s troubled history tells us that each time there has been constitutional deviation, the results have been devastating. Consider. Since Sunday, Pakistan has no government and there is a void. This is not a trivial issue. A nuclear-armed country with the world’s fifth largest population, with tensions on its eastern and western border has been reduced to a Banana republic thanks to an ill-advised, impetuous leader who, as a national newspaper says, is not “suited to hold public office within a democratic order.”

Only in a magical realist world can a country grappling with an economic meltdown and facing numerous insurgencies be thrown into the abyss within a few minutes when a demagogue refuses to step down after losing the legitimate grounds to rule.

This current crisis has also dealt a setback to the revived constitutional rule that emerged after decades of democratic struggle, political movements, murders of prime ministers and the sacrifices by many a political worker. It is clear that Imran Khan was never a part of that democratisation process, and his so-called “22-year struggle” was a nothing more than a means for self-aggrandizement and winning another trophy after his much-touted cricket victory of 1992. Both these trophies, historians will note, came at a heavy cost for the country. The first led to an entitled, misplaced claim to political power and the second ended up ruining the country’s economy and the constitution.

In fact, Imran Khan ends his tenure not just with a broken economy and a poorer populace, but also with the hollow conspiracy rhetoric of a US regime-change plan which his support base is consuming with relish and circulating via a grand disinformation architecture that Pakistani taxpayers funded during his shambolic reign.

What is done is done, but the bigger question that faces the nation now is if the Supreme Court of Pakistan will repeat the historic blunder by Justice Munir who in 1955 ratified the illegal dissolution of the Constituent Assembly by Governor General Ghulam Muhammad. The early signs have not been that encouraging. After a grandiose sou motu notice on Sunday, the Supreme Court has turned this urgent matter of national importance into another regular petition. And even if the court gives some relief, it remains unclear if it would actually punish those guilty of subverting the constitution. At least the sordid chapter of our history gives us little hope of any course correction.

Imran Khan ends his tenure not just with a broken economy, a poorer populace, but also with the hollow conspiracy rhetoric of a US-regime change plan which his support base is consuming with relish and circulating via a grand disinformation architecture that Pakistani taxpayers funded during his shambolic reign.

It is also clear that the hybrid regime designed by the powerful actors in the military establishment is no longer tenable and has actually died an unmourned death on Sunday, April 3, 2022. Perhaps the biggest question here is if a hybrid order 2.0 being designed as Pakistanis remain hooked on conspiracy theories peddled on TV screens or the long-drawn proceedings of the Supreme Court.

Many observers hold that the critical high-level appointments and/or extensions within the military, due in November 2022, may have unleashed a destabilising dynamic into the system.

The joint opposition under Pakistan Democratic Movement has lost face, for it attempted to choose a path of negotiations with the military establishment instead of building public opinion for a legitimate transfer of power to civilian actors through a free and fair election. Admittedly, the vote of no confidence was a purely constitutional route, but the tactics employed brought the proverbial camel into the tent, thereby scuttling the possibility of an informed public opinion seeking a much-needed reset of civil-military relations. If the opposition parties –  especially the PML-N – want to fix this situation, they have no option but to go back to their constituents and the public instead of letting the unelected institutions decide the fate of democracy in the country.

This week the Supreme Court of Pakistan is likely to rule on illegal acts of Sunday. The court could potentially do the following: a) declare all that happened on Sunday as unconstitutional and reverse the illegal acts of the regime; or b) express that illegal acts were perpetrated and without restoring the assembly let a fresh election take place like it did in 1988; or c) contribute to the continuation of the current hybrid order under the doctrine of necessity.

It should be clear that only the first option would show the way of ending the current crisis and meet the ends of justice. All other options will make matters worse for there will be further anarchy, polarisation and uncertainty. The Supreme Court, in a 2012 verdict, triumphantly announced that it had buried the doctrine of necessity. A fresh election called after a civilian coup will be farcical to say the least.

Systemic shocks such as the one designed and executed on Sunday, if not remedied by the judiciary, will normalise fascism and set dangerous precedents for years to come.