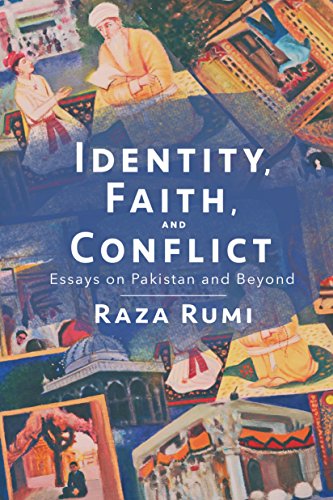 As a journalist and media commentator, Raza Rumi publishes with frequency, responding to continuing troubling events in South Asia. As a policy analyst, he goes beyond the immediate situation to examine the systems and history behind these conditions. And as a Pakistani Muslim, he writes with compassionate patriotism for his country, seeking avenues of reform and renewal.

His 12 essays gathered in this collection display his facility in a range of writing styles –– from academic and researched to journalistic and personal. They originally appeared in journals, newspapers, and institute publications – in Pakistan, India, England, and the United States. The earliest dates from 2008, but the rest were published between 2012 and 2015, in the months before and after the March 2014 assault on Rumi’s life. And so they offer a glimpse of his public views expressed while in Pakistan, as well as his continued outspokenness in exile.

In Islamabad that March, Taliban operatives attacked his car in an assassination attempt, which Rumi survived but which took the life of his driver. In view of the imminent danger, in April he left Pakistan and joined family in the U.S. Since September 2015, he has been hosted by Ithaca City of Asylum, teaching as an international scholar-in-residence in Ithaca College’s Honors Program and since fall 2016,
at the Cornell Institute for Public Affairs. He continues to publish abroad and blog regularly about conditions in Pakistan and South Asia.

As an intellectual and progressive who has lived through successive military and weak civilian regimes, Rumi has consistently taken a rationalist stance in his writing and televised commentary. Despite his country being seen, as he says, a “South Asian menace,” his lodestar is the vision of a modern, secular state advanced in 1947 by Pakistan’s founder/founding father, Muhammad Ali Jinnah. It’s a far cry from what emerged, as he writes, “the tragic consequence of the nation-state using religion as the sole marker of its identity.”

Rumi consistently argues for a fair system of democratic governance, a Pakistani state that must uphold both its ideals and laws. He struggles for an inclusive and tolerant nation, against excess and extremism. This balanced, liberal belief is shared by other Pakistanis (including many in exile) even as many others adhere to a conservative Islam and ideal of a theocratic state –– a paradoxical society, much as in neighboring Iran.

In these particular essays, Rumi examines what it means to be Muslim in Pakistan today, how to define oneself in a contradictory and volatile society where zealotry turns to discrimination, exclusion, and even murder. For a Western and particularly a United States reader, he offers a unique look into the complex social, political, and religious practices that inform contemporary Pakistan.

We learn of the persecution of the Ahmadiyya community, practicing Muslims whom the state defines as non-Muslims; of the damage inflicted by rigid and xenophobic madrassa system of education; of the radicalism of multiple jihadist factions. Rumi addresses/examines Pakistan’s postcolonial legacy, successive constitutions, political factionalism, and the inherent instability of an Islamic republic of some 200 million people, half of whom are illiterate, with profoundly conflicting social agendas/beliefs/attitudes. Through his analysis, we move toward a more nuanced understanding of Pakistan today.

We also apprehend the uncertain and wrenching emotional state of being bereft of one’s country. In several of these essays, Rumi writes movingly of being displaced, of the life of an exile, of the mehfils or gatherings with other South Asians where their culture is remembered, shared, and sustained.

It seems fitting that refusing silence, he closes this collection with “Reclaiming One’s Voice,” which itself ends with his trust in survival.