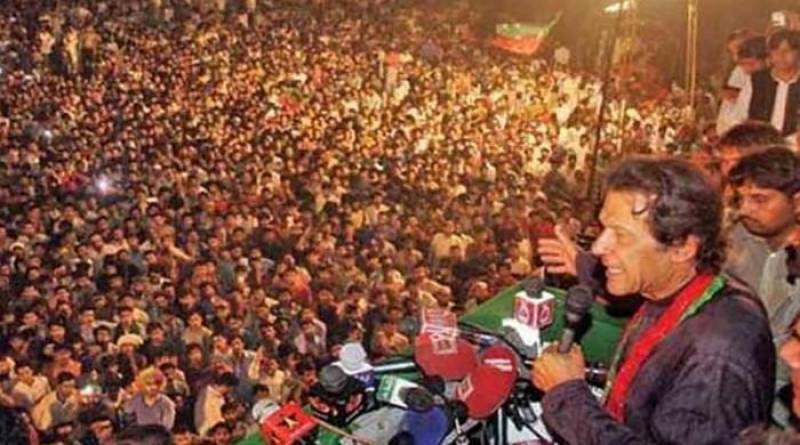 Even if PM Nawaz Sharif survives the current crisis, his government will be permanently weakened.

Pakistan is in a state of crisis and the continuing deadlock between the government and opposition parties threatens to derail the constitutional order. Since the beginning of August, the two leading opposition groups – Imran Khan’s Pakistan Tehreek-e-Insaf (PTI) and the Pakistan Awami Tehreek (PAT) led by a Canadian-Pakistani cleric Dr Tahir ul Qadri – have been mobilising their supporters for a regime change.

Both have different objectives but are joined forces in the moment to oust the incumbent Prime Minister Nawaz Sharif. On August 15, the two groups entered the capital and a few days later marched into the high security Red Zone where all the diplomatic missions and key state buildings such the parliament, supreme court and presidency are located.

The crowds were smaller than expected but they are charged, parked in the capital and willing to storm into the PM House. The army which has been entrusted with the role to protect the state institution buildings has prevented this from happening and it has demonstrated that it will avoid a situation where it may have to intervene by force.

The spokesperson of the armed forces has advised the “stakeholders” to engage in consultations and settle the issue. The army issued a formal statement saying: “The situation requires patience, wisdom and sagacity from all stakeholders to resolve prevailing impasse through meaningful dialogue in the larger national and public interest.”

The key demand of Mr Khan’s PTI is that the PM should resign and pave the way for an independent inquiry into the alleged rigging that took place in the 2013 elections. Mr Qadri and his party PAT have more sweeping demands for a new system of government. Both groups have little new to offer beyond the overthrow of Sharif’s government. There is no concrete plan, no direction for structural changes and most importantly no new national security paradigm.

There doesn’t seem to be a resolution underway in this political standoff. PM Sharif returned to parliament for support and he did receive it: Almost all the elected parties (except for Khan’s which withdrew earlier) have backed him and passed resolutions in his favour. His core constituency – the business lobbies across Pakistan – also came out strongly in his defence. The reason was obvious: Karachi Stock Exchange lost 1375 points (the highest fall in a day) on August 11 over fears of political instability. The Pakistani rupee has also depreciated against US dollar since the crisis started.

This comes at a time when foreign direct investment has been falling due to the security and political climate.Some estimates say that protests are causing a financial loss of Rs 150bn ($1.5bn) per day and hitting the daily wage labour.

Even civil society including activist lawyers turned its back on Khan and his march by observing a symbolic strike across the country against any future deviation from the constitutional rule.

Since August 20, formal talks between the government and leaders of protesting groups have not yielded results. The government has accepted most demands except that for Sharif’s resignation. The various rounds of talks broke down and Khan made another grand speech to reiterate his accusations.

In short, there is an impasse where the opposition is going to backtrack if only Mr Sharif quits the office. And, the statements from Sharif’s camp are clear that such a resignation is not likely to happen. PAT also wants the Punjab Chief Minister, brother of the PM, to be removed from office due to the tragic showdown between his supporters and the provincial police which led to the deaths of 14 people.

Such political instability is not new to Pakistan. A lack of consensus on how the country has to be governed has plagued Pakistan’s history with cyclical patterns of military rule and weak civilian governments. With the current protests, such schisms have captured public imagination through a powerful electronic media where the very rationale of democracy is being debated often in an adverse manner. The protests are unique for they are being televised into the homes of millions of Pakistanis and thus creating a broader impact.

Another important dimension of the current mobilisation is a comeback of the Barelvi sect adhered to by the majority. Dr Qadri is a leading cleric of this relatively moderate order and has authored a major treatise against suicide bombings. In addition, the Shiite political party, Majlis e Wahadat e Muslimeen (MWM) has also joined the protests ostensibly against the policy of appeasement of armed sections of more hardline Deobandi groups which legitimise attacks on Shia Muslims and Sufi shrines.

This is why a proscribed extremist organisation protested in favour of the current government. If this configuration has the patronage of the establishment – as some suggest – then a policy shift maybe underway. The state’s alliance with the hardline jihad groups began in 1980s during the Afghan war and it has now expanded within the country.

According to most observers, Pakistan’s powerful military is the key player in this crisis. Given Pakistan’s political history, the final arbiter of this conflict will be the army as well. Backdoor consultations have continued as close associates of the PM have been meeting the army chief. The PM has also consulted the army chief sensing that he may possess the key to final resolution. A few days ago, a Reuters report said that matters between the Army and Mr Sharif were getting resolved by the latter agreeing to “share” space with the army.

In the recent days, Mr Sharif has resorted to building a political coalition, given due importance to the parliament and has avoided using brutal tactics to dispel the crowds in the capital. Observers say that this may be a little late as the situation is fast turning into a plan to manage his ouster. But Mr Sharif fights on.

The truth is that Mr Sharif has been considerably weakened and even if he survives this crisis it may not be the end of the story. For most Pakistanis this is another spell of uncertainty; and the promise of economic recovery that shaped the 2013 electoral outcome seems even more distant.

If there is a derailment of the constitutional order it will undo the gains made during the past seven years by Pakistan’s political and civil society. If the PM is forced to resign it sets a wrong and dangerous precedent. And if there is no change, the autonomy for the civilian government will be restricted in key policies, most notably in Afghanistan where a transition is taking place. No matter what will end the current crisis, the future of democracy looks bleak unless the civilian forces join hands to reform the state structures, fix the electoral system, including party-structures, and provide better services through elected local governments.