This piece of mine appeared in the Hindustan Times yesterday. An accidental piece it was, written on the request of a friend during my recent stopover in Delhi.

Be it Khan Market or MM Alam Road, life for young guns in both Delhi and Lahore is a blend of cafe culture, cool music and retail nirvana

A Pakistani like me who is visiting Delhi cannot help but identify the commonalities between the Indian capital and Lahore. The climate, the predominant Punjabi influence, the urban chaos and indeed the quest for a good life are as shared as the centuries of mixed history. 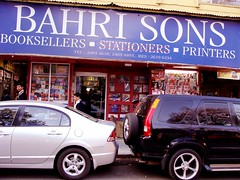 In Delhi, these ingredients are packaged into a single space, loved and mourned in equal measure, the Khan Market. Its swanky cafes, retail outlets spell out a comfortable sense of the plentiful. A trip to Bahri Booksellers is essential to check on the new, profound and banal book titles. Step out of the book-zone, walk around and you see young men and women holding hands and out to buy a little dose of happiness from the upmarket retail stores. New frames for glasses, an array of pret-a-porter garments and of course cafes where one can lounge while sipping an exotic coffee brew with a fancy cake. Barista is a favourite of mine with its neo-modernity ambiance and an ample variety to select from. If Barista is crowded, one turns to Cafe Turtle. Wi-fi access is available in these places along with soft music and trendy customers, whose snazzy mobile telephones rest silently on clean little tables. Connectivity is another facet of the global search for fulfillment. 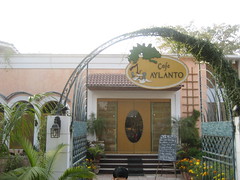 In Khan Market cafes, one reminisces about similar haunts in Lahore. The MM Alam Road there is now a bustling venue for stylish cafes and restaurants that are popular hangouts for the youth defying the silly stereotypes of Pakistan. Men and women converse in their designer jeans about the world, quite unaware of the residual violence of the war on terror on the Pak-Afghan border. The Coffee & Tea Company is hugely popular. Another joint, Massom, a pancake lounge, sells mouth-watering desserts with coffee brews and plays cool music as one plunges into leather sofas to chill. Places such as Cafe Zouk, Hobb-Nobbs, Jamin Java continue to lure the hip Lahorites.

Since globalisation’s onslaught on Pakistan, Lahore’s traditional love for eating out has transformed into a fusion culture bonanza. The Hot Spot Cafe, Little Italy, Cafe Aylanto and The Dish have emerged as havens of cross-continental culinary blending. Young women drive alone to meet up with friends at these places; and hordes of teens are seen flocking to the Pizza Huts, McDonalds and Kentucky Fried Chicken outlets.

What a Lovely Review on my book “Delhi by Heart”

Lahore, a centre for the arts and learning in the