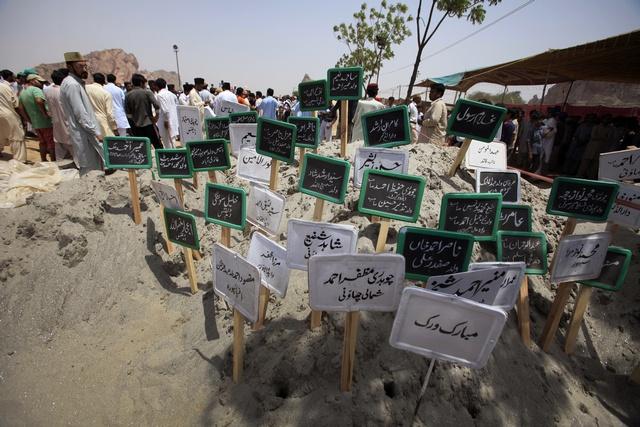 Temporary headstones of victims at an Ahmadi Muslim graveyard in Chenab Nagar, northwest of Lahore in 2010 (Reuters)

After today’s ghastly attacks on the Ahmadi community of Pakistan, one can only despair at the state of affairs. The essay below was recently published in a publication and I am also posting it here for the readers. It is imperative that we speak up for the rights of fellow Pakistanis who are being constantly attacked by the bigots.

Half citizens? The Ahmadiyya community of Pakistan

Throughout 2012, members of the Ahmadiyya community of Pakistan from all walks of life were harassed, threatened, and at times killed, with impunity. These attacks were the latest in a wave of violence and maltreatment that stretches back to the early years of Pakistan. Successive regimes, both military and democratic, have actively or otherwise worsened the trend.[i]

The generation that grew up in General Zia-ul Haq’s Pakistan (1977-1988) saw a country that was being re-engineered as an ‘Islamic state’. Several criminal, social and economic laws were introduced in the name of Islam. The Federal Shariat Court was established with the power to strike down any existing law it deemed to be repugnant to the Injunctions of Islam, as laid down in the Holy Quran and the Sunnah of the Holy Prophet.[ii] Extensive religious programming on state television regurgitated the state narrative.

Pakistan was an ideological state and it needed to assume a new identity independent of the hitherto pluralistic culture and history of South Asia. Further indoctrination was attempted through textbooks and prayer sermons.

Arguably the most categorical ‘fact’ propagated during the Zia era was that Ahmadis, or Qadianis, were pretending to be Muslims while actually they were not. Teachers told their students that this community had violated a central tenet of Islamic faith – that is, the finality of the prophethood of Muhammad (PBUH) and believed that the founder of their sect, Mirza Ghulam Ahmad, was also a ‘messenger of God’.

Through the family, schools and other influences, young Pakistani minds formed a consensus on this issue. There were dissenting voices, but they were fearful of openly challenging the mainstream narrative that was ferociously backed by the state.

This narrative did not stop at simply excluding Ahmadis from Islam. It also had a larger political backdrop. People would hold forth with scant or no evidence that ‘Qadianis’ (as the community’s founder was from a place called Qadian) were agents of the enemies of Pakistan and Islam. They were British stooges, went the story, created by the Raj to weaken Muslims and their faith. Some said that Ahmadis were given such importance because they rejected violent jihad and hence suited British purposes. These theories gained currency as Zia was resetting the Pakistani state as one created for jihad.

The roots of anti-Ahmadi prejudice can be traced back even further in Pakistan’s troubled history. In 1953, a series of violent agitations erupted against the Ahmadiyya movement in Lahore. The riots were instigated by the Jamaat-e-Islami, a religious political party led by Maulana Abul Ala Maududi, a Sunni theologian and strong critic of the Ahmadiyya movement. The riots resulted in over 2,000 deaths, prompted the imposition of martial law in the Punjab province, and led Governor General Ghulam Muhammad to dismiss the federal cabinet.

The 1953 riots demonstrated how effectively Islamists in the new state of Pakistan could use a religious issue for political ends. The riots took place in a province where being an Ahmadi was hardly an issue at the time.

A Court of Inquiry comprising Lahore High Court’s Chief Justice Muhammad Munir and Justice Rustum Kayani, was set up by the government to investigate the causes of this incident. Its report makes for a fascinating reading. None of the clerics who appeared before the court could define who was a ‘Muslim’ and the judges were clear in their remarks:

Time and again, the sane voices in Pakistan have called for a religiously neutral state that does not encourage bigotry or issue certificates of ‘Muslimness’. However, this advice has remained unheeded by politicians and generals who have been using religion as a political tool.