Lahore features again. It is a little difficult not to yearn for Lahore if you belong there… 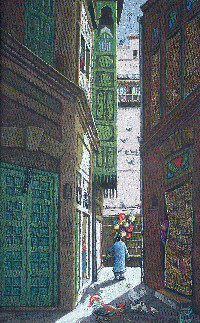 First, Mahboob Ali from Lahore (Pakistan) sent me digital images of his woodcuts in colour. I had earlier touched upon his novel technique here.

These were splendid images – evocative and the medium added several dimensions and moods to the structures and scenes depicted.

As I made an effort to get out of this odd state of appreciation-nostalgia-brush with history that Fawad, an old friend and a fellow blogger sent me the link to his recent post on his travels in old Lahore. This was quite a coincidence – a writer and an artist musing over the same places in their own peculiar ways. Note the use of colourful kites as a metaphor for Lahore’s exuberance and mood in almost all the images. 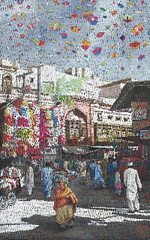 Old Lahore is a neglected tale of destruction of history and architecture. Unfettered “development” is changing its character and there are few who protest about it. Unlike several historical cities that one has visited, this particular part of Lahore – centuries old and mythical in its layout and design will soon be gone. Or maybe not?

…I walked back into the walled city via Roshnai Gate and winded my way through the streets and alleys all the way to Masjid Wazir Khan inside Delhi Gate passing innumerable shops, bazaars, historic landmarks, shrines, mosques and imambargahs in Mori Gate, Lohari Gate, Shah Alam Bazaar, Mochi Gate and Akbari Mandi. Masjid Wazir Khan is one of the most beautiful and famous mosques in Lahore. It is an oasis of peace set in the midst of crowded bazaars pulsating with constant, loud and hectic commercial activity. I sat in the mosque courtyard for a while looking at the delicate decorations on the walls, the surrounding brick buildings overlooking this serene 17th century structure and flocks of pigeons fluttering on the mosque’s domes and minarets.

This reminded me of my recent visit to Masjid Wazir Khan recorded.

And then he mentioned his visit to Kim – a small bookstore located within the Lahore Museum. And here is Mahboob Ali’s version of the area that Fawad talks about. The origins of Kim are interesting. A work of fiction by the nineteenth century English writer Rudyard Kipling, the novel Kim is set against the backdrop of the Great Game, the political conflict between Russia and Britain in Central Asia during much of the eighteenth and nineteenth centuries.

A strange mix of fact and fiction, indeed. And, Fawad walked by this historical place with so many connections interlacing history, politics and urban identity.
A little away on the right of Kim is another landmark of Lahore – the Government College. A renowned institution that produced great men of letters. I had a chance there to study there albeit briefly. Its Gothic and Indian lines are a curious blend. And one of the woodcut images sent by Mahboob Ali captures a lovely view.

And finally this sad representation of Chauburji – a Mughal monument built by Princess Zebunnissa – another amazing tragic Ã‚Â character from Mughal History. I wrote here about her. The decline is evident but the sky sings nevertheless.. Mahboob Saheb: many thanks for sending such lovely images. And, of

course Fawad made my day!

Artist, Mahboob can be contacted via email: [email protected]

Next Post
Reality Check – a disturbing picture of Lahore

My painting as a magazine cover