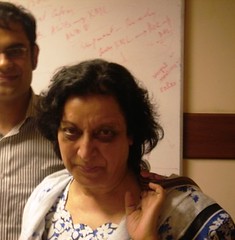 Whilst my earlier piece on the IMF programme and the tremendous discussion it has invoked deserves a rejoinder, I want to write on a completely different subject this week. I am perturbed by the fact that thousands of jobs have been recreated for those who were rightly or wrongly dismissed in the earlier dispensations; there is silence about one luminary, a towering one at that, who lost state employment twice. Fahmida Riaz’s name is yet to appear amongst the reinstated ones.

Following the physical departure of the leading Urdu poets – Qasimi, Munir and Faraz – Fahmida Riaz is arguably the greatest living poet of Pakistan. Controversial though this statement might be, her originality and path-breaking poetry has yet to find an equal in the turbulent waters of the Pakistani cultural river. It is hardly surprising that Fahimda Riaz has been targeted all through her otherwise illustrious creative career by state and society alike. She was branded as unpatriotic when she had to run for her life in the Zia-ul-Haq days and live in exile. In India, she was termed as a Pakistani agent since she criticised the communal tensions that the Indian state had encouraged.

Her bold poetic expression was considered indecent in a country where pornography, heroine and arms are sold on every street. And, where stage plays with “hot” mujras and explicit sexual innuendo are patronised by official cultural institutions in the name of commercial viability. Fahmida was sometimes labelled as a non-believer when she questioned the clergy; at other times a communist when she talked of social justice. Even last year, a group of Karachi-based “intellectuals” chided her for eulogising a letter by the fourth Caliph Hazrat Ali (AS) as a model for good governance. This time she was a reactionary and a “toady.”
She had to deal with a society that was unshackling itself of the colonial hangover and still continues to do so, where the mullah, the mighty arms of the state, oligarchies of vested interests flourish with ease; and all independent voices have to be silenced, co-opted or crushed. And, the hapless poets especially those outside the ambit of officialdom are the soft targets of such cultural cleansing.

In the second PPP government (1988-90), Fahmida Riaz was appointed as the managing director the National Book Council of Pakistan (later merged with the National Book Foundation), where she made a mark and even the unfriendly press recognised her reform. This was a short-lived stint as she was seen as a “PPP” appointee. In Benazir Bhutto’s second tenure as prime minister, Riaz was affiliated with the Ministry of Culture and her work was incomplete on the fateful day when the Leghari brigade unseated yet another elected government. And now that the third PPP government is in power, she is forgotten by those whose identity she has had to bear all these years making her a permanent punching bag of right-wing ire.

From the trials of Manto to Faiz’s detention the story is pretty predictable. Even when the military regimes were not there, we have treated our poets shoddily. Ahmad Nadeem Qasmi died in a tiny house located on a street with potholes. Earlier he was dismissed and a lowly state minion humiliated him by summoning him after six decades of literary accomplishments. Munir Niazi passed away last year in similar circumstances; and Ahmad Faraz was unceremoniously dismissed from his job reportedly for refusing to please an MNA. Scores of writers, musicians, and vocalists live in abject poverty. An exception to this trend was recently made by the prime minister when he took note of the ailing genius Mehdi Hasan, whom the corporate media had almost forgotten.

This is hardly a new trend, though. Mir Taqi Mir, in the troubled times of the Mughal Empire’s decay, lived in dire circumstances and was intermittently rescued by regional kingdoms. Ghalib the ‘immortal genius’ was struggling to reclaim his pension and, to use his words “feed,” his adopted children and servants. The demise of the central state in the late nineteenth century and the new state-building by colonists ruptured the patronage culture. Alas, the new states of India and Pakistan manned by the British-trained bureaucrats and politicians continued this policy. In India, things changed somewhat but in Pakistan the societal apathy and anti-culture state policy continues unabated with the result that literary personas and poetic careers are considered with contempt and are a metaphor for being a “loser” in the galloping commercial times. Unless, of course, you cater to the teenage yearning or the bawdy humour market.

Fahmida Riaz lives in Karachi ignored by the state and society. Look at what the Colombian and Spanish governments have done for their giant, Gabriel Garcia Marquez, who is provided accommodation and allowances for the simple fact that he has enriched and internationalised the Spanish language. The prolific historian K K Aziz resides in a Lahore suburb neglected and forlorn for he is always a threat to official truth monopolies.

The least that a “people’s” government could do is to employ Fahmida Riaz so that she does not have to squander her creatively mature years while searching for short-term livelihood. She must write for posterity. Fahmida’s voice is not just a matter of women’s empowerment or the nurturing of Urdu literature but for the soul of Pakistan and its survival. In these times when the government wants to fight the ascendancy of the obscurantism and extremism what could be more rewarding to honour the best of the muses.

We hope that in the absence of Benazir Bhutto, the president, the prime minister and his cabinet will take notice of this situation and without further delay correct a historic wrong.

Published in The News