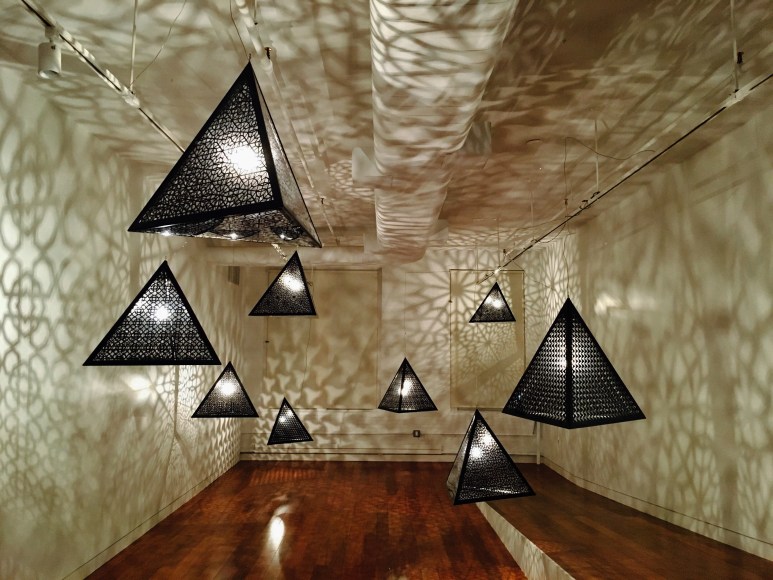 A shorter version of this article was published in DAWN in January 2017.

Pakistani American artist Anila Quayyum Agha has been celebrated for her groundbreaking sculptural installation Intersections that earned her global acclaim and resonated with a host of cultures. Her recently concluded exhibition Walking with My Mother’s Shadow at Aicon Gallery, New York, weaved even more personal, intimate stories. Agha’s work has a universal appeal. With a range of drawings and installations, Agha presented mixed emotions of celebrating her son’s wedding and mourning the loss of her mother. The two events, she told me, occurred within a gap of few weeks in the early part of 2016.

Losing a mother is both traumatic and definitive. In a way, it is also the loss of home and identity, and many across the globe especially the ones who have been displaced, experience this. Agha’s exhibition also evokes the happiness for her son who begins a new life and once again it echoes human experience of rejuvenation and re-living. These contradictory experiences in effect narrate a lived experience. In an interview, Agha stated that her current work “reflects on the complexities of love, loss and gains.”

At a larger level, Agha states, “it was the communal sense of loss – of loved ones, identities, homes and countries – experienced by myriad people across a world ravaged by the atrocities of war and displacement that created equivalence.”

It is this juxtaposition of the personal with the political, and meditation on the past and the future that defines and sharpens the emotive appeal of her work.

Agha grew up in Lahore, was trained at the National College of Arts and University of North Texas. Currently, she is the Associate Professor of Drawing at the Herron School of Art and Design at Indiana University Purdue University Indianapolis. Her work has received critical acclaim in the U.S. as well as abroad and she is the winner of many prestigious awards such as the ArtPrize 2014 Public Vote Grand Prize and shared the Juried Grand Prize for her installation Intersections. Agha’s art practice is conceptually challenging, and combines complexity of “thought, artistic action and social experience.”

Walking with My Mother’s Shadow employs a range of media, from large embroidered drawings to sculptural installations, which investigate the complex relationships between religion, gender and culture. Her engagement with the political is clear in the works that were displayed at Aicon gallery. But the personal anguish and reflection is what strikes the viewer. The reflection of light and darkness expands the scope of viewer’s experience and also brings him/her into the artistic narrative.

Agha’s consciousness of [in]justice is rooted in her personal history. Her father, Mian Abdul Quayyum, was a civil servant who was dismissed under Gen Zia’s regime for favouring Bhutto. A long legal battle followed and the court reinstated her father tragically after his death. During our conversation, she recounted the obstacles that she had to face as a young woman, and over time her meditations on gender and culture have crystallised and informed her practice.

She mentions “layering of silence” that takes place in women’s everyday lives; and the expected behavior is “shutting up against authority.” On occasions of joy and mourning both, women are relegated to a secondary position or simply made invisible. On her son’s wedding, she was not invited for the “sehra bandi”. The family as the locus of oppression is important to recognize and as an artist navigating different cultures, Agha is acutely aware of the limits.

The floral patterns, cuts and embroidery that recur in Walking with My Mother’s Shadow are attempts to capture “the identity, beauty, and femininity of my mother and other mothers – me, you, us – that become obscured by gravestone and shroud”, Agha reflects in her artist’s statement. “The many colored, metallic embroidery threads in these works are often used in women’s wedding dresses in Pakistan but never for shrouds. In stitching these threads into paper, and cutting patterns in steel, I connect the wedding that is believed the beginning of a woman’s life-giving journey, and the funeral that is its ultimate end,” she expounds. The funeral and the wedding that led to Walking with My Mother’s Shadow pay homage to the cycle of life encompassing both beauty as well as fragility.

Agha tells me that the use of embroidery and beads on white, black and brown paper, “reflect and refract light.. represent space that belongs to one more than the other, evaluate the color of my body and the bodies of others, and the cycles of life and death.” She mentions in her statement that the series in white “reference the white of marble gravestones and shrouds, both of which are a central element of death and its commemoration in Pakistan.”

Conversely, the black drawings featured in Walking with My Mother’s Shadow denote both the surface and the hidden layers “often not seen or mined.” Her drawings in brown drawings highlight “our bodies, and the longing to belong and matter.” The red and black sculptural installations amplify floral and geometric motifs “to inhabit a large space, covering and beautifying all that are in it.”

The Regeneration series was inspired by the immense efforts of women “in fixing homes and countries”, says Agha. Man-made disasters are ultimately handled by women and they regenerate the earth as well as human dwellings.

Agha’s pièce de résistance ‘Intersections” played with the geometrical patterns inherent to Islamic sacred spaces, and despite the certitude of the belief system, it articulates fluidity of spiritual representation and experience. The installation draws in the viewer “to confront the contradictory nature of all intersections, while simultaneously exploring boundaries.”

Inspired by her memory of Lahore where she grew up, the mosques “filled with bouquets of calligraphic writing and geometric symmetry” interact with the devotees.  However, most mosques are not open to women. The notion of exclusion from a public space came back to Agha when she visited the Moorish Spain. At Alhambra, she relived the “wonder and exclusion” that she had felt while growing up in Pakistan. She tells me that women’s experience in public spaces is unsavory for it often entails “ridicule, groping and cat-calls.” At Alhambra she saw the wonderment in the eyes of the visitor and this complicated emotion inspired Intersections. Here Agha celebrates the geometric depth of Alhambra, but also the “intersection of history, culture and art” and the conflation as well as symbiosis of Islamic and Western discourses.

Intersections, most notably, suggests visual experience where the shadows, ambiguities and dark spaces exist despite the harmony and open up the range of possibilities within the Muslim cultures of past and the present. At the same time the single source of light emphasizes the unity but creates shadows which are under nobody’s control. Agha adds that her work also questions the authenticity debate. “Is it Islamic art?” Or, “am I still an authentic Pakistani.”

The rich corpus of Agha’s practice underlines her highly evolved skill in drawing but also the outstanding ability to think and speak beyond, and beneath the lines. Walking with My Mother’s Shadow, is also a conversation by the artist with her past and present and exploration of identity, loss and abounding confidence in life.

A shorter version of this article was published in DAWN in January 2017.
Tags: anila quayyum aghaArts and CulturePakistani American Artists

If there is one word that describes Fahmida Riaz, it