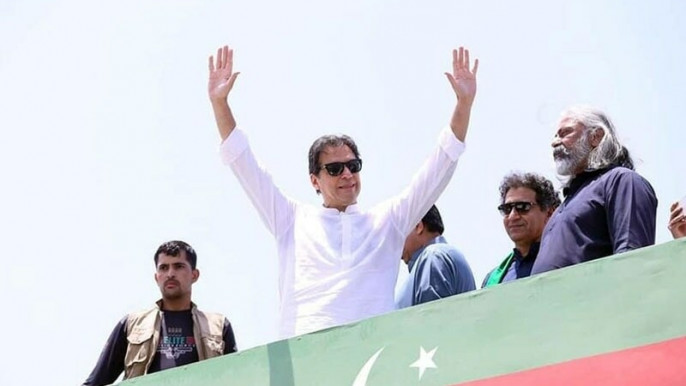 Tensions rise in Pakistan, as the country braces for protests.

Pakistan faces yet another challenge and this time it is not the terrorist groups but the opposition groups mounting pressure on its Prime Minister to resign from office. One of the main opposition parties in Pakistan Tehreek-e-Insaf (PTI) has been complaining of electoral rigging since the 2013. PTI’s charismatic leader – a sportsman-philanthropist turned politician – is leading a Long March to Islamabad on August 14, Pakistan’s Independence Day.

Moderate cleric Dr Tahir ul Qadri, who leads the Pakistan Awami Tehreek (PAT) and is in alliance with political factions supporting General Pervez Musharraf, has also called on his supporters to join the march.

Earlier he called for protests in the second largest city Lahore which turned deadly after local authorities tried to disperse them. Qadri came back after living in Canada to lead what he calls a movement for “inquilab” or revolution. In plain terms, Qadri seeks to overthrow what he says is a “corrupt and unjust system”.

At the same time, Khan’s PTI has led a vigorous campaign to delegimitsie Nawaz Sharif’s government. Sections of media have sided with Khan in building the popular narrative and the public opinion is deeply polarised.

In recent days, the government has been in a state of panic – blocking main roads, highways, suspending mobile telephone service and preventing people from attending the protest. Sharif’s government announced that it was going to set up a high level judicial commission to investigate the charges of rigging, but he was not willing to resign.

The current crisis comes in the wake of brewing tensions between the prime minister and Pakistan’s powerful military over a number of issues. Foremost among these is General Musharraf’s trial for treason over the coup he led in November of 2007.

The military now faces a major challenge from the civilian centres of power – the government, judiciary and civil society – that call for accountability for past crimes committed by generals. Sharif reportedly contemplated letting Musharraf leave the country but his team’s handling of this case was neither transparent nor unequivocal. Now the case is with the Supreme Court, which makes it even more difficult to have Musharraf released. The military, many suggest, views this as an unacceptable situation and therefore according to some analysts it might be quietly backing the anti-government protests.

Additionally, government-military relations are strained by the way the cabinet has dealt with the Pakistani Taliban and its decision to normalise trade relations with India. As political dissent threatens the government, the power balance has shifted to the military.

The military has been in charge of securing the capital since August 1 mainly to minimise security threats in the wake of ongoing operation against militants in North Waziristan. This means that if anti-government protests escalate, the military will be the only force that is able to force them to disperse. But given the unresolved conflict between Sharif and the army, it is unclear if the military leadership would be willing to side with the government.

Sharif recently held a national security conference where he invited the chiefs of army and intelligence, along with his political allies, and attempted to forge a consensus. The army held a field commanders’ conference a day later and deliberated on the overall security situation. The position of the military leadership, however, remains unclear for now.

The best case scenario in the current situation is for Sharif to show political astuteness and handle the protests in a democratic manner. Thus far, his strategy has been to use state coercion to prevent or weaken the protests. This has been counterproductive; the deaths during the clashes in Lahore killings have become an albatross for his administration. Even if the army remains neutral and Sharif saves his premiership, he would come out a weaker PM and more vulnerable to military’s diktat.

In Pakistan some are predicting the worst case scenario – direct military intervention – if violence erupts. However, the military, apparently, is not keen to take the reins of power, as it is embroiled in anti-insurgency operations in the north and south of the country. The security establishment also fears that with the pullout of NATO from Afghanistan, the Pakistani Taliban may regroup and re-launch attacks on the state. Therefore an old-fashioned coup does not seem to be in the cards.

There also is talk about a technocratic government comprising professionals who can clean up the electoral system and hold elections to the satisfaction of all political groups under the stewardship of the army. Even Imran Khan has asked for something similar. However, this is not the first time such a solution has surfaced.

There is fascination in some elite quarters with technocratic rule. In practice, this model failed under the interim administrations of 1990s as well as during the first years of General Musharraf’s rule (1999-2002). Pakistan’s diversity and serious governance deficits require a representative government that can empower multiple ethnic groups and subnational political centres. It remains to be seen how the events pan out but it is certain that the military will wield its trump card and act as the final arbiter.

The current crisis is also ominous in other ways. Pakistan has faced a long spell of stagflation and decreasing foreign and domestic investment due to insecurity. Already, the stock markets have reacted negatively to the brewing tension and instability may harm the economy which needs to generate millions of jobs for its largest population segment – the youth. Secondly, the popularity of Imran Khan and resonance of Qadri’s agenda with some sections of society (including media) imply that the failings of the democratic system are not being addressed by the political elites. PM Sharif is a rare visitor to the parliament and undertakes key decisions through a coterie of loyalists of which a good number includes unelected bureaucrats.

Pakistan’s growing urban population is impatient for better services, security and livelihoods. There is some measure of disappointment with Sharif administration’s inability to quick-fix the energy crisis as was promised through populist rhetoric during the 2013 elections. Imran Khan represents the segment of population that wants a rebranded democratic system to govern their country. But a rupture in the democratic process would be most damaging as the required reforms are best mediated through the parliament and civilian consensus.

Finally, the ouster of General Musharraf through a popular urban movement and the completion of the last government’s tenure was a sign that the civilian space was expanding. In the recent months, it seems that the military has regained some of the lost ground and has returned as a central player once again.

During the first decade of Pakistan’s existence there were seven prime ministers. From 1988-1999 the country had nine prime ministers. If the present imbroglio is not resolved then Pakistan may slide back into this historical pattern of endemic political instability. It is, therefore, a major test of political and the military leadership to prevent another spell of uncertainty or worse a deviation from the constitutional path. Pakistan’s history tells us that the consequences of an extraordinary “outcome” of agitation are disastrous for the country.