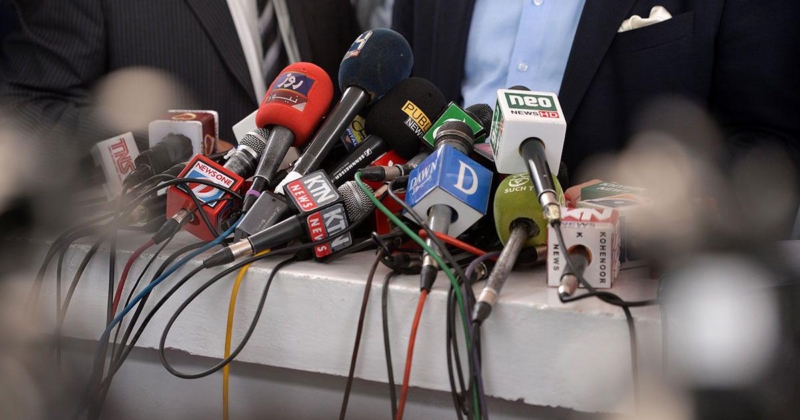 My piece that was published earlier this week:

IT is a truism that media freedom in Pakistan today has been earned after a long struggle which will perhaps continue in the years to come.

Deepening of democratic traditions and their permeation in society are sine qua non for a free media. Whilst there can be no two opinions on the independence of the media, the need for greater responsibility and professionalism has to be articulated in no uncertain terms. Such is the confusion and chaos triggered by an overgrown executive that the issue of responsibility has been sidelined by the overwhelming noises for media freedom especially since the tinkering with the text and application of Pakistan Electronic Media Regulatory Authority (PEMRA) Ordinance.

We are now getting used to a television culture that imitates the life of Pakistani tharras, chai-khanas and drawing-rooms where politics is discussed ad nauseum. Rare exceptions include issue oriented talk-shows but they appear bland unless their all knowing hosts inject some political spice into them. Expertise is taken for granted; new-age generalists judge every subject under the sun and occasionally take themselves a bit too seriously. Yes, the commercial imperative of the media dictates programming patterns. But there has to be a method to this disorderliness.

The most recent occasion of electronic media wizardry was the announcement of the Pakistan People’s Party-led coalition candidate for the unenviable job of the prime minister. The moment the announcement was made, a leading channel played a popular Indian film song that lamented broken promises. In this case, the fabled promise of the prime ministerial cookie for Makhdoom Amin Fahim.

Admittedly, the party of the people and its allies were secretive about the process. The principle of transparency, ideally, is germane to elected institutions. However, this is neither an ideal world nor is it going to turn into one overnight. The way a momentous decision was trivialised was not in good taste. The news industry forgot that this was a party still recovering from the brutal murder of its omnipresent leader less than three months ago.

And then the vulnerable Makhdoom was grilled into a line of questioning by many channels anticipating that he would put the fissures within the party into the public domain. Much to their consternation, nothing of the sort came about. In fact, the icy Makhdoom, disappointed as he must be, maintained his dignity and decorum in the face of a media that desperately hoped for catchy breaking news.

Earlier, the guessing game on the PM nomination was played up into teacup hype, was also, to a certain extent, unwarranted. For instance, the delay in requisitioning the session of the National Assembly was far less analysed than why the PPP was unable to settle for Makhdoom. The discourse on the issue focused on ‘loyalty’, ‘honour’ and such other terms that may go well with the patriarchal-authoritarian society but not with the difficult task of inculcating democratic values.

Alas, the level of analysis was such that the ‘potential’ candidates were rarely compared in terms of merit, competence or likelihood of pulling together a difficult coalition. And no one bothered to check how this process was managed in the region especially India where coalitions are now a norm. Sadly, the chequered history of PPP media trials continues even when plural and relatively free voices abound.

Well, this is the beginning of a new journey. We have a mature political class that is willing to jointly challenge the historic ascendancy of non-elected institutions. This is something that is central to the future of all freedoms including that of the media. As the first speech of the prime minister proved, democracy —truncated as it might be — is the only way of ensuring the independence of the judiciary.

The release of deposed judges came about ironically through the parliament. The sweet irony of it all is that this was a scene not envisaged by those who were urging all and sundry to boycott the elections. That a president sans uniform had limits to his powers was a nuance not debated.

The channel gurus were more inclined towards the ‘purity’ of political positions. Considerable airtime was devoted to the Faustian ‘deal’ that was perhaps the last grand sin of Bhutto in the eyes of our puritans. She had of course to pay with her life for redemption.

In a similar vein, television debates on suicide bombings and war on terror reinforce the populism that endangers critical introspection, and reduces the discourse to a level that, simply put, is simplistic. We all know that the demons of extremism have been nurtured for decades. They existed prior to the American invasion of Afghanistan and our frontline status. But discussions about the slow Talibanisation of Pakistan being a reality are taboo; as the overwhelming majority of ‘experts’ consider this a ‘reaction’ thereby according a subtle legitimacy to the gruesome acts perpetrated in the name of religion.

Unwittingly, the agenda of the suicide brigades gets a helping hand when TV channels relay images of human limbs, severed heads and trucks ramming into security guards. I recall the ugly evening when bombs exploded prior to the chief justice’s arrival at a rally in Islamabad last summer. This was the first time that at least I experienced the disturbing visuals betraying lack of scrutiny. As violence is always gripping, it attracted the attention of my five-year-old and eventually we had to turn off the television.

Popular channels ran notifications urging parental guidance as if this would gloss the evident dearth of punctiliousness. However, this continued as a trend — entrenched, sensational — sadly when Pakistan was witnessing the worst spate of suicide bombings in our recent history. Chopped heads metaphorically are embedded in our histories: from the Baghdad tales of minarets out of severed heads, to Mongol invasions of Delhi and Lahore and the famed anecdote of Emperor Aurangzeb sending the head of Dara Shikoh to Shah Jahan.

But a modern, progressive Pakistan has to overcome this legacy of medieval barbarity and a free, mature media needs to assist in this process and condemn what is utterly condemnable.

Thus emerges the urgent need for self-regulation, codes of conduct and internal accountability. Let the media shun all ‘advisories’, this should be done of their own volition. Globally, there are several examples to follow and the capable ones within the media are well aware of them. There would be no point in listing them here. Suffice to say here that we, the engaged TV viewers, want a free media that is equally responsible; and challenges the stereotype and half-truth instead of reinforcing it.

A glorious future lies ahead for the electronic media — for we have a powerful agent of change, when we had almost given up on the hope for a change.

Pakistani journalists and activists continue to face intimidation and violence.