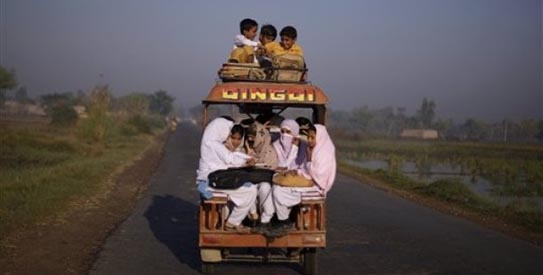 The recent debates on education have also highlighted how the education sector is not receiving its due compared to say defence, infrastructure and other expenditures made by the government. However, the discussion has yet to move to the most important area i.e. quality of schools and what sort of learning are they providing?

The task of reforming the education system is huge, complex and some would say next to impossible. However, the 18th Amendment to the Constitution has opened the doors to avenues for change. Firstly, education is a provincial subject and the transfer of budgets (with increased allocations through the National Finance Commission Awards) implies that there is now more flexibility and autonomy with the provinces in matters of policy and operations. Secondly, the inclusion of right to education in the fundamental rights also ensures that this is now a justiciable right as well as a paramount priority of the state.

Provinces have been managing their educational systems even before the 18thAmendment was passed. However, the policy-making, standard setting and curricula setting were federal subjects.

Pakistan’s case has been the classic example of policy failures. Every government has launched an education policy with much fanfare and with some ambitious targets but almost all of them have not been realised. The key problem as even a high school student knows is the lack of implementation or rather the difficulties of translating policy goals into results: enrollment, gender parity, improved quality and accountability.

In the post-devolution context, the provinces can formulate their own policies and this is the time for them to get down to serious planning for the future. Each province has its own peculiar constraints and opportunities and therefore is in a best position to set the objectives of what they intend to do with the education sector.

Firstly, the provinces would have to focus on the public schools. The issues are well documented  absenteeism in teachers, lack of incentives for the parents to send their children to school, lack of facilities, laboratories and most importantly the collapsed monitoring and evaluation systems. Perhaps the greatest priority is to ensure that there are enough teachers and that they are well trained. However, this problem could be lessened through the promotion of alternative education and technology, like online Master’s programs. Teacher training has faced stiff resistance in the past. Punjab tried to do it a few years ago and met with strikes by the teachers. Incetivising teachers therefore would be a priority in this policy domain.

Secondly, the growth of private schools also indicates that there is a robust supply of educational facilities in the country. The World Bank led Learning and Educational Achievement in Punjab Schools (Leaps) study shows that between 2000 and 2005, the number of private schools increased from 32,000 to 47,000. A significant conclusion was that by the end of 2005, one in every three enrolled children at the primary level was studying in a private school.

Given that the Leaps report is already dated, the numbers may have increased. This has serious implications for policy at the provincial levels. Provincial governments must also become regulators now, set the standards and provide information to the parents on the quality of schooling available.

Also, correction of imbalances in terms of coverage can also be handled by the state by incentivising setting up of private schools in areas where educational facilities are lacking.

Thirdly, the most critical area pertains to the textbooks and the curricula that are being used. Scores of experts and analysts have noted the prejudiced nature of curricula as well as the structure, approach and methodology they employ. Provinces have the powers to correct the historical wrongs and set up independent and capable commissions to undertake this reform at the earliest. There is no point in increasing the access to schooling if learning outcomes are not guaranteed.

Most importantly, the 1980s insertions of jihad and Islamism need to be corrected. Globally, it is recognised that children cannot be made victims of ideologies that spur and legitimise violence of any kind. Furthermore, children should not be ingrained with gender stereotyping, cliches on non-Muslims and made fodder for a national security state. There is now great onus on the provinces. To make sure the wheel is not reinvented, the work done earlier should be used and draft proposals for curricula reform should guide the provinces.

Fourthly, massive corruption in the education sector is a cause for alarm too. Despite the fact that billions have been invested in the system, there are massive leakages through a culture of rent seeking. Teachers, headmasters and education department officials collude and share the rents. The procurement for schools is another scam that is well known to all local stakeholders when they see shoddy building materials, ghost expenditures and sub-standard textbooks, materials etc. Therefore, it is essential that provinces also strengthen their procurement regulatory authorities and make sure that all loopholes are plugged.

Lastly, there can be no meaningful progress if the mammoth provincial bureaucracies are not trimmed and powers not further decentralised to district and sub-district levels. Provincial monolithic structures need to be broken down into manageable local units under the supervision of elected officials who are directly accountable to the public. Despite the problems of 2001-2008 devolution, the performance of education sector at the local level saw some improvement. The budgets were spent at least. Currently, the centralised planning and procurement makes it impossible to even spend the existing budgetary allocations. This also calls for reforms in financial management and planning systems to facilitate spending on education that is timely, transparent and outcome-focused.

Education policies and outcomes are critically dependent on the governance of the sector and the overall political economy variables. The provinces therefore need to prepare a detailed implementation action plan to ensure quality assurance and set up independent education commissions for improving school governance as well as monitoring and evaluation of education services at primary and secondary levels.

Such commissions should be statutory and can provide innovative options for the implementation of education policy and strategy. Specifically, the education commissions can suggest and design workable options for availability of the teachers in schools. Further, these commissions can identify needs for teachers training, provide customised solutions and oversee the curricula reform that cannot be delayed any longer. The political elites must shun their short-termism and focus on the real issues facing Pakistan. Needless to say the education emergency tops the list.

The writer a writer, policy adviser and editor based in Lahore. He blogs at www.razarumi.com and also manages Pak Tea House and Lahorenama webzines.

In 2010, Pakistan’s Parliament devolved education as well as the

“The 18th Amendment: An Overview” chapter by Raza Rumi was