After reading my earlier post, my dear friendÃ‚Â Sheraz Haider has corrected the translation of the Persian quatrain Shah Ast Hussain as follows:

Ruler is Hussain, Emperor is Hussain,
Faith is Hussain , guardian of faith is Hussain .
Offered his head and not the hand to Yazid.
‘Indeed, Hussain is the foundation of La-ilah (the
declaration that none but God is absolute and almighty) 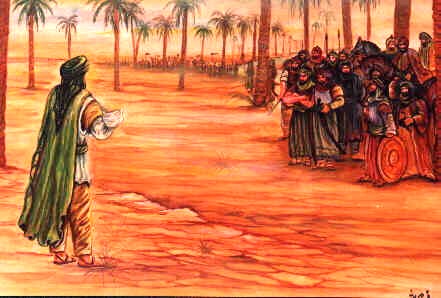 The sacrifice in Karbala reconstructed the religious thought in Islam, redefined faith, restored the dignity of human being, created a rich idiom for the discourse on truth, and finally led to evolve theological development in Islam.

The tragedy in Karbala encouraged intellectual discourse on the freedom-determinism debate. Abu Said ibn Abi al-Hasan Yasar al-Basriemerged as the first one to announce that man is totally responsible for his actions. He argued this position in a letter to the Umayyad caliph Abd al-Malik.His letter, which is the earliest extant theological treatise in Islam, attacks the widely held view that “God is the sole creator of man’s actionsÂ. His letter indicates that in early Islam theological disputes centered around struggle against monarchy, despotism and oppression.

The debate which started after the Karbala tragedy matured in to the intellectual wrangling among Mutazila -trying to give a rationally coherent account of Islamic beliefs- and Ashariyya-reacting against the excessive rationalism of the Mutazila.

Sheraz has touched upon a most profound trend following the Karbala and how anti-monarchy debates ensued within the faith. It is a shame that the battle continues today within and outside the Islamic world. However, we have the shining example of Imam Hussain not to compromise on principles and live and die for one’s ideals.Asad Ali in his comment points out:

…..we should not be the mourners of Imam Husain (AS) but we should be his followers.

I cannot agree more with Asad..

Next Post
O how the Beloved fits inside my heart