The Pope could have avoided this controversy by being a little more sensitive and by applying some discretion while selecting references for his speeches. But then as this editorial says, how could we expect this from a ‘doctrinal conservative’. His apology is timely but the damage has been done.

The Pope Words
Published: September 16, 2006
There is more than enough religious anger in the world. So it is particularly disturbing that Pope Benedict XVI has insulted Muslims, quoting a 14th-century description of Islam as evil and inhuman.Â
In the most provocative part of a speech this week on faith and reason,the pontiff recounted a conversation between an eruditeÂ Byzantine Christian emperor and a learnedÂ Muslim Persian circa 1391. The pope quoted the emperor saying, Show me just what Muhammad brought that was new, and there you will find things only evil and inhuman, such as his command to spread by the sword the faith he preached.Â
Muslim leaders the world over have demanded apologies and threatened to recall their ambassadors from the Vatican, warning that the pope words dangerously reinforce a false and biased view of Islam. For many Muslims, holy war Â jihad is a spiritual struggle, and not a call to violence. And they denounce its perversion by extremists, who use jihad to justify murder and terrorism.
The Vatican issued a statement saying that Benedict meant no offense and in fact desired dialogue. But this is not the first time the pope has fomented discord between Christians and Muslims.
In 2004 when he was still the Vatican top theologian, he spoke out against Turkey joining the European Union, because Turkey, as a Muslim country was Ã¢â‚¬Å“in permanent contrast to Europe.
A doctrinal conservative, his greatest fear appears to be the loss of a uniform Catholic identity, not exactly the best jumping-off point for tolerance or interfaith dialogue.
The world listens carefully to the words of any pope. And it is tragic and dangerous when one sows pain, either deliberately or carelessly. He needs to offer a deep and persuasive apology, demonstrating that words can also heal. 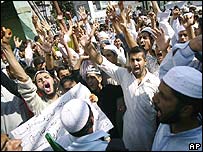 Next Post
Everything except love is devoured by Love

0 thoughts on “The Pontiff Apologizes”