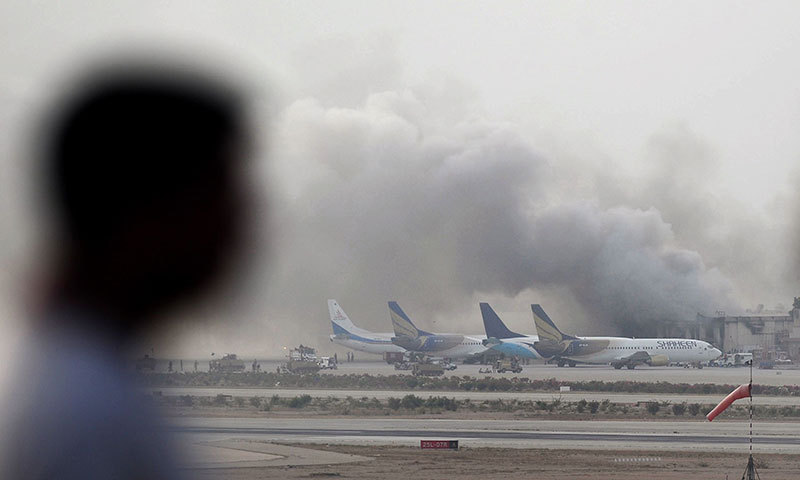 By Raza Rumi, Special for CNN

Editor’s note: Raza Rumi is a policy analyst, columnist and consulting editor at The Friday Times, Pakistan. He is also the author of “Delhi By Heart: Impressions of a Pakistani Traveller,” (Harper Collins). The views contained in this opinion piece are solely his.

(CNN) — It would be an understatement to say that Pakistan is under attack.

This week, the Pakistani Taliban bypassed all security checks at the country’s largest airport in southern port city of Karachi.

A few hours after the Karachi airport was reclaimed by Pakistan’s security agencies, a suicide bomber rammed a truck into a military checkpoint in North Waziristan, close to the Afghanistan border, killing at least three soldiers.

The attack on Karachi’s international airport resulted in the deaths of 29 people, including security personnel. The bodies of another seven cargo workers were recovered Tuesday from a cold storage facility at the airport. All 10 terrorists died during the assault.

Even after those attacks, for the second time in two days, Pakistan’s largest and busiest airport was forced to shut down after militants launched a brazen attack on airport security forces. Tuesday’s assault targeted the Airport Security Forces academy near Karachi’s Jinnah International Airport, the airport’s manager told CNN’s Saima Mohsin in Karachi. The attackers fled, and no one was killed in the attack, officials said.

The obvious question is: How did the militants manage to enter the airport premises with heavy arms and ammunition?

This security lapse however is not new. In 2009, militants breached an otherwise impregnable fortress — the General Headquarters of the Army in Rawalpindi — and continued their operation for hours.

In 2012, they were also successful in carrying out suicide attacks at Peshawar’s International airport, resulting in more loss of life.

Despite these major lapses, Pakistan’s system of intelligence gathering and sharing has been reformed. The new internal security policy, agreed in December 2013, aims to centralize the intelligence sharing process, but it is yet to be implemented.

In the case of the Karachi airport attack, the military’s swift response helped salvage the situation. Within five to seven hours the airport had been cleared and, given the high-value targets there, major damage was prevented.

Another key feature of the operation was the decisive role of the military, as the civilian government apparently took a backseat.

Under Pakistan’s constitution, federal ministries are responsible for aviation and airport administration, but the ministers were nowhere to be seen.

Even in terms of media management, the military seized the initiative as the head of inter services public relations (ISPR), a major general, was live tweeting and informing about the progress of the operations.

In any other country this would not seem extraordinary. But, given Pakistan’s peculiar history and the recent civil-military tensions, these developments were meaningful. There was a clear public message that the Army was at the forefront and in control of security policy and operations.

Negotiations with the TTP

In the weeks before the attack, Pakistan’s civil and military branches of government had been struggling to find a way out to deal with the TTP.

Civilians are afraid of the reprisal attacks, and the military is in no mood to allow the TTP to continue killing its soldiers.

Formal talks with the TTP commenced in February 2014 but these disintegrated a fortnight ago. Concurrently, the military had been launching airstrikes and the Karachi attack came in the midst of policy shift in Islamabad. The airstrikes resumed after the airport attack was foiled.

Since Pakistan’s new Army Chief Raheel Sharif assumed charge in November 2013, the military has given clear signals of its intent to tackle the TTP militarily. The TTP is believed to have killed between 5,000 and 15,000 Pakistani soldiers including generals in recent years. Pakistan’s Army did not suffer such losses in three wars against India (1965, 1971 and 1999).

Civilian leaders are worried about the potential backlash of such military operations.

What complicates the issue further is that some of the factions of TTP are in league with the (Pakistan-friendly) Afghan Taliban, and an all-out operation would hit them as well.

The Pakistani Taliban are not in a position to take over the country. However, the three terror incidents in the past 48 hours underscore their capacity to launch attacks on multiple fronts. They gained media attention and reminded everyone of their cohesion, weeks after reports that the TTP was in disarray after a major faction split from the group in May.

Is the TTP in crisis or cohesive?

In its official statement accepting the responsibility for this attack, TTP cited the Karachi attack as a revenge for the martyrdom of its leader Hakimullah Mehsud, who was killed in a U.S. drone strike last year.

Since then the TTP — a loose umbrella of various militant groups — has been in a crisis of sorts. Its leader Fazlullah reportedly operates from Afghanistan and, according to Pakistani official sources, gets support from the Afghan authorities. For the latter, Fazlullah’s presence is a lever to get even with Pakistan for its purported support to the Afghan Taliban, who launch frequent attacks and are contenders for the power pie after NATO’s drawdown in 2014.

It is unclear if the recent attacks will lead to the emergence of a coherent policy and civil-military consensus in Pakistan. Civilians are afraid of the reprisal attacks; and the military is in no mood to allow TTP to continue killing its soldiers.

And with the withdrawal of foreign troops, soon the neighboring Afghanistan may turn into an easier space for Pakistani Taliban and their affiliates.

It is time for Pakistan to make a hard choice.

In its strategic calculus, it needs to address mending relations with the Afghan government and viewing terrorism as a shared problem.