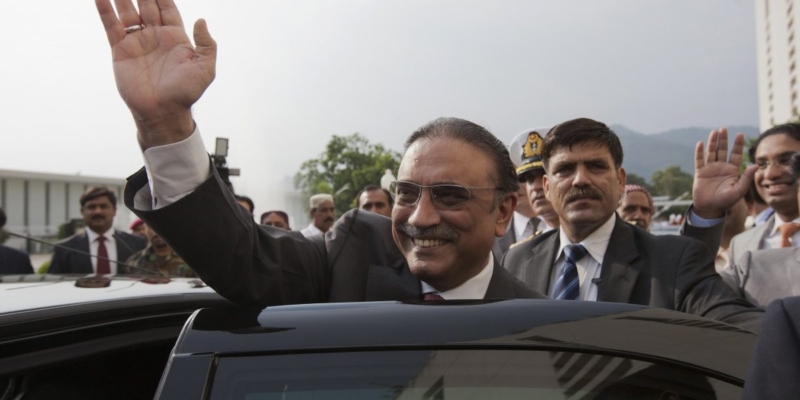 President Zardari has set a new record of being the only democratically elected President to have completed his term and left the office without hanuffs, disgrace or an exile order. The ongoing transition to democratic rule after three decades (1977-2007) of direct and indirect military rule is not going to be a smooth ride. Pakistan’s civilian institutions remain weak and vulnerable to systemic crises. That Zardari bolstered the cause for civilian rule in an incremental manner will be remembered in history despite the reservations of critics in the political arena as well as the media.

In 2008, the decision of the PPP to field Zardari as a candidate was met with public uproar largely constructed by Pakistan’s media industry, which primarily caters to an ‘urban’ and ‘middle class’ demographic. It was said rather authoritatively that Zardari was unfit for office; and not just due to his alleged corruption during his wife’s tenure as the Prime Minister. Pundits opined that he lacked ‘capacity’ and an understanding of Pakistan’s complex issues. In fact, a major newspaper group’s editor and some of its TV hosts predicted on a regular basis that Zardari would be out of power within months.

None of these uncharitable predictions proved true. If anything, Zardari was able to muster support from his old, bitter rivals and made alliances across the political spectrum. For the first time in PPP’s history, it ruled all four provinces as well as the centre, and even bagged a majority in the Senate for after 1977. These extraordinary political skills stunned even Zardari’s sworn enemies. The multi-party coalition enabled the PPP government to undertake unprecedented structural reforms in the shape of the 18th, 19th and 20th Amendments to the Constitution of Pakistan. Gilgit-Baltistan was declared a de facto province with an improved rights’ framework and work was started to address Balochistan’s marginalization. After the new National Finance Commission Award, the development budget of the province increased threefold. Most importantly, the state’s obligation to protect the poor from price shocks was articulated through a successful income support programme, which by now serves millions of poor households and empowers women. Reform process in FATA was also commenced, though it remains stymied due to the conflict in the region.

These stellar achievements, however, were marred by frequent stories of corruption and mismanagement – attributed to the two PPP Prime Ministers – even though many of the charges levelled have yet to undergo judicial scrutiny and corroboration with hard evidence. That said, the PPP’s inexperience in governance was evident at various points. At the same time, it should not be forgotten that twice the government was faced with huge natural disasters, which it handled as adroitly as a creaky state machinery can in a country such as Pakistan.

The judiciary-executive tension also mired the tenure of President Zardari. Pakistan’s judiciary, which emerged victorious in its battle with Gen Musharraf, felt aggrieved about Zardari’s reluctance to restore the suspended judges. First the National Reconciliation Ordinance (NRO) meant to end the use of corruption cases as a bargaining chip against politicians, was thrown out. Second, the Court insisted on the reopening of the corruption cases against Zardari pending in the Swiss courts, indirectly questioning the constitutional immunity the office of the President enjoys. A tug of war ensued, leading to the dismissal of PM Gilani, and eventually when a letter was sent to the Swiss authorities, the case was found to be time-barred. This was an unfortunate chapter of our history and could have been avoided.

Similarly, when it came to Pakistan’s commercial hub and its largest city, the PPP government could not do much in the quest to appease its coalition partners chiefly the MQM and ANP. In fact, Zardari’s initial and ill-advised attempts to support pro-PPP gangs also backfired as they went out of control. This was an area where the government could have chosen a different strategy. However, the imperatives of the coalition government directed the course of events; and Karachi continued to bleed with thousands of deaths at the hands of criminal gangs often affiliated with political parties and the powerful non state actors such as sectarian groups and the Taliban.

Perhaps the most worrying part of Zardari’s tenure was the relinquishing of civilian responsibility to take charge of Pakistan’s security and foreign policies. The government did ‘own’ the Swat military action and also oversaw action in various agencies of the tribal regions. However, the policy towards Afghanistan and the United States was largely handled by the military and the intelligence agencies. The world also recognized this limiting factor and therefore chose to deal with the military arm of the government directly. The mistrust grew between Pakistan and its historical ally, the US. Civilians were often painted as untrustworthy and potential ‘traitors’. Three moments can be recounted during the Zardari Presidency: First, after the passage of 2009 Kerry-Luger-Berman aid package when the military spoke against it bypassing the rules of business. In fact, the media held then Pakistani Ambassador Haqqani as the architect of the aid conditions, which was rather far-fetched. Second, the case of a CIA operative Raymond Davis on a killing spree in Lahore during 2011 was also projected as a result of relaxed visa policy engineered by the civilians. Facts show otherwise.

The third moment arrived when Osama Bin Laden was discovered, captured and killed in Pakistan’s garrison town in May 2011 and once again there was a divergence in the views of the military and civilian leadership. However, this incident led to a most unnecessary tug of war through the ‘memo case’ where Pakistan’s Ambassador Haqqani was once again accused of having sent a memo for direct US intervention in case there was a coup in Pakistan. An unsigned memo led to frivolous litigation in the courts. Haqqani was sacked to appease the military and ultimately nothing came out of the furore except the news that the former DG ISI reportedly had been galvanizing support for a coup in Pakistan.

On India, Zardari caved in after his initial euphoria was expressed memorably in late Benazir Bhutto’s words that there was a little bit of India in every Pakistani and a little bit of Pakistan in every Indian. Zardari spoke of developing a policy of “no-first nuclear-strike” against India in November 2008. The Mumbai attack a few days later led ostensibly by non-state actors from Pakistan was a befitting response to Zardari’s naivete. However, two years later the government did pick up the threads and modest success was achieved in terms of visa and trade accords. The current government is building on this legacy, which is encouraging and indicates a bipartisan consensus in the country.

State policy on favourite and non-favourite non-state actors for Afghanistan and India remained out of the civilian domain and Zardari made little or no effort to change it. It is a separate matter if he was empowered to do that or not. Zardari will however be remembered for two bold foreign policy initiatives – signing a gas pipeline deal with Iran, and handing over the Gwadar port to China which might have far reaching impact in the years to come.

Despite the foregoing, some space was opened in resetting the civil-military imbalance. PM Gilani made some hard-hitting speeches in Parliament and on occasions the government did make the right decisions. Governance in Pakistan is by and large the preserve of the civil-military bureaucracy; and now the courts are playing a direct role as well. The populist courts, nor the media, liked Zardari and therefore ‘public opinion’ on him remains unfavourable.

Pakistan’s political class has paid well-deserved tributes to Zardari, and his beleaguered party awaits his return to the political arena. His policy of reconciliation has been hailed as the way forward and the Sharif administration seems to have adopted it as an instrument of transacting governance. Benazir Bhutto articulated this policy of reconciliation and her last book (Reconciliation: Islam, Democracy, and the West) goes into detail on why it was needed not just in Pakistan, but even at the regional and global levels to tackle some of the political fault lines that bedevil today’s world. Idealistic as it may sound, it did pay dividends in Pakistan and a democratic transition has continued, in large measure, due to its creative application by the political elites.

The PPP’s defeat in the 2013 elections calls for extraordinary efforts to revive party structures and refocus its priorities. It remains to be seen whether Zardari’s fluency in power politics will translate into popular politics and mobilization capacity. Rebuilding the party in the largest province of Pakistan would require an ideological redefinition and supporting local leadership which was abandoned in favour of local bigwigs who failed to deliver the election. Perhaps a greater challenge awaits Zardari. It is important he does not fail, as the decline of PPP would hurt the future of federal politics in Pakistan and alienate the smaller provinces even further.