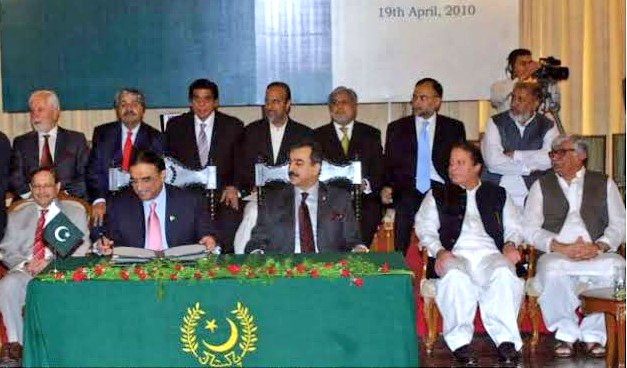 Published in Tehelka this week

AFTER 37 YEARS OF POLITICAL UNCERTAINTY, PAKISTAN’S CONSTITUTION HAS BEEN RECAST ON ZARDARI’S WATCH. WILL IT HELP REKINDLE DEMOCRACY, WONDERS RAZA RUMI

Branded a failed state, Pakistan has become notorious in the global media. Political change is often a result of the notorious 111 Brigade (the Rawalpindi-based army contingent which leads any military coup) moving on the streets of Islamabad and capturing the derelict PTV (Pakistan Television) headquarters. News-worthiness is defined by the number of suicide blasts that take place in a single day within what has been termed as the most dangerous country in the world. Pity that such stereotypes have prevented a nuanced understanding of Pakistan, as well as the fact that it is a fast changing country with a strong yearning for the rule of law and constitutionalism.

These days, Pakistanis, when they are on a break from the next suicide bomber, are rejoicing over a major political shift brought about by the April 8 approval by parliament of the 18th Amendment to fix the truncated Constitution. Thirty seven years ago, for the first time in its existence, Pakistan’s political elite was able to reach a consensus on the scheme and shape of the Constitution. An earlier version was the 1956 Constitution, which was abrogated even before its implementation by Field Marshal Ayub Khan in 1958. There were two other military gifts to the nation in 1962 and 1970, which were hardly democratic and barely representative of what citizens actually wanted.

From 1973 to 2004, there were 17 amendments, which were enacted by a predatory executive, a servile judiciary and rubber-stamp parliaments that altered the fundamental scope of what the 1973 Constitution stood for. Federalism was diluted by an overbearing presidency with powers to dismiss the National Assembly, a National Security Council lording over people’s representatives and several other distortions introduced by General Zia ul Haq. The post- Pervez Musharraf era, marked by political instability and a civilian order vulnerable to organised terrorism and geo-strategic pulls, has managed to bring all political players to one table, speaking a common language of federalism and democratic governance.

Too good to be true, says the eminent Karachi-based political analyst and economist Asad Sayeed as sweeping changes to the constitution have come about with the backing of one of the most representative parliaments in the country’s history. This has also reversed the trend whereby two dictators amended the Constitution with the connivance of the Supreme Court, he adds.

The soft spoken Raza Rabbani, who enjoys the trust of Pakistan’s civil society and all political parties due to his principled politics, headed a multi-party Parliamentary Committee on Constitutional Reforms. During the deliberations, it seemed that the parties might not agree to a common reform package.

STEREOTYPES HAVE COME IN THE WAY OF A NUANCED UNDERSTANDING OF PAKISTAN. IT IS A FAST CHANGING COUNTRY WITH A YEARNING FOR THE RULE OF LAW AND CONSTITUTIONALISM

Next up, President Asif Ali Zardari, a favourite target of Pakistan’s right-wing media and politicians, was always regarded as a stumbling block to the reform process. Confrontations with the Opposition and key institutions of the state during the first two years of his presidency made it seem that Zardari would not agree to parliament curbing his powers. To his credit, Zardari has belied all such predictions. It is difficult to think of another instance in which a politician has given up power voluntarily.

Political developments in Pakistan based on a civilian consensus have rarely been noted: before the agreement on the National Finance Commission (NFC) award (the annual distribution of financial resources among the provinces), reforms were introduced in the Gilgit-Baltistan region and an inclusive set of special initiatives was introduced in the estranged Balochistan province. All along, despite the various somersaults, key Opposition leader Nawaz Sharif, stayed the course and supported the political reform agenda” from the agreement on the NFC award to the major constitutional reform.

The Musharraf era’s unlawful entries via the 17th Amendment into the basic document have now been repealed. Most notably, Pakistan’s parliament has amended Article 6. Sharif’s firebrand supporter and Vice-President of the Pakistan Muslim League (N), Makhdoom Javed Hashmi, says we have blocked the roads to power for dictators once and for all.

The greatest of distortions was the concentration of powers in the presidency. The political elite, who have since 1947 displayed their ideal as a parliamentary form of government, are likely to curtail presidential powers to dissolve the National Assembly, repealing the infamous Article 58(2) B, which led to dismissals of four civilian governments between 1988 and 1999. The Prime Minister, therefore, will soon act as the real chief executive.

Most importantly, the presidential powers under Article 243 to appoint a Chairman of the Joint Chiefs of Staff Committee and Chiefs of Staff of the army, navy and air force have also been curtailed, making the advice of the Prime Minister in this respect supreme. It is a separate matter that the role of the army is strongly embedded in the polity, and achieving civilian supremacy over the uniformed brigades will be a long-term project, free of geo-strategic compulsions.

Pakistan’s fractured history is also a tale of ruptured and unworkable federal arrangements. Prior to the 1971 war with India, it was the breakdown of federalism that led to the separation of East Pakistan and the creation of Bangladesh. The separatist movements in Balochistan and NWFP and disquiet in Sindh that has occurred in the years since has been a result of an overbearing Centre. In 2010, the constitutional reforms are about to undo the past. Perhaps the most potent symbolism is the renaming of the colonial North West Frontier Province (NWFP) as Khyber Pakhtunkhwa. The name was a bone of contention between the minorities residing in the province, but a compromise was achieved in the last few weeks by adding Khyber to the land of the Pakhtuns.

A radical departure is also inherent in the abolition of the concurrent legislative list and certain subjects in the federal list. This would entail a major devolution of powers from the Centre to the provinces with huge possibilities, Sayeed says. Provinces could easily undo the discriminatory laws, make amendments to the criminal procedure codes and be in the driving seat for reforms for improved service delivery to the impoverished, whose number runs into millions.

ARTICLES 153 and 154 that govern the working of the Council of Common Interests (CCI) shall also change, and the council will meet at least once in 90 days. The CCI, for much of its existence, has been a dormant and weak body leading to complaints by smaller provinces that their concerns were not being addressed within the federal framework. Another amendment binds the federal government to consult provincial governments before deciding on the construction of a hydro-electric power station there. Two other changes will now authorise provinces to raise domestic and international loans and enable the provinces to enjoy at least half of the revenues from mineral and oil and natural gas within their limits, or adjacent territorial waters. This bodes well for Pakistan.

Perhaps, the traditional ascendancy of the military and its civilian partners has watered down during the last few years. This is an area that has neither been fully investigated nor noted. The strengthened role of parliament comes in the wake of a strong lawyers movement that has overtaken political developments since 2004. The most important harbinger of these developments was the two-year-long movement led by the lawyers, civil society and political parties against the Musharraf regime since March 2007. While the movement aimed at establishing rule of law and the independence of the judiciary, it merged into the larger quest for restoration of civilian rule. In addition to ousting an unpopular Musharraf, restoring the rightful Chief Justice and the holding of a free and fair general election, the movement made all the political players realise the absolute necessity of avoiding military rule at all costs.

Pakistan is also a fast urbanising space. Its middle class, by all accounts, has expanded over the last decade and thus, a stronger demand for accountable and responsible governance exists. This is perhaps the backdrop to an increased role of parliament.

The strength of the federal cabinet after the next election will now be restricted to 11 percent of the total strength of parliament and that of provincial cabinets to 15 members or 11 percent of provincial assemblies. Taking the lead in South Asia, a seven member judicial panel for naming judges for appointment to superior courts to be confirmed by a parliamentary committee will be formed.

ACCORDING TO THE 18TH AMENDMENT, THE PRIME MINISTER WILL SOON ACT AS THE REAL CHIEF EXECUTIVE. BUT THE VIEWS OF THE ARMY REMAIN UNCLEAR AND THERE MAY YET BE SOME HITCHES

What the amendments and proposals for reform have overlooked are the notorious Islamic clauses inserted by General Zia which have not been touched due to fear of an orthodox backlash. The colonial-era status of Federally Administered Tribal Areas (FATA) has not been changed either.

Political leaders outside the parliamentary orbit have not been too kind. Imran Khan, the cricketer-turned politician, has rejected the proposed mechanism for appointments in superior courts because he believes there should be no political involvement in selection of judges. Similarly, the right-wing Jamaat-e-Islami, which was a collaborator with Musharraf regime, has termed these amendments as useless for the common citizen. Such voices of dissent aside, Pakistan as a whole has welcomed the developments.

In the shifting contours of Pakistani politics, the views of the army remain unclear. Many analysts such as Najam Sethi of The Friday Times fear that even after the amendment is passed, there may be obstacles to its implementation. Rabbani, who was a close associate of Benazir Bhutto, has voiced this concern repeatedly. He says the move to strengthen provinces to make the federation powerful negates the thinking of dictators of the past who sought to strengthen the Centre at the cost of provinces, and perpetuated their rule by introducing presidential, quasi-presidential and unitary forms of government. We believe in participatory federalism, he says, but warns that the 18th Amendment will not yield any fruit until we have the will to implement it.

It is ironic that a beleaguered and seemingly weak civilian government has been able to push through major reform in such a short while. India and other powers in the region need to recognise this and rethink their conventional wisdom in not acknowledging the inherent power of the democratic aspirations of Pakistan’s populace. There is a long road ahead for democracy to deepen, but its premature death each time has been a major blow to the country’s progress, as well its ability to coexist with its neighbours.

(Rumi is a Lahore-based writer and editor, The Friday Times)

The 18th Amendment: An Overview

“The 18th Amendment: An Overview” chapter by Raza Rumi was