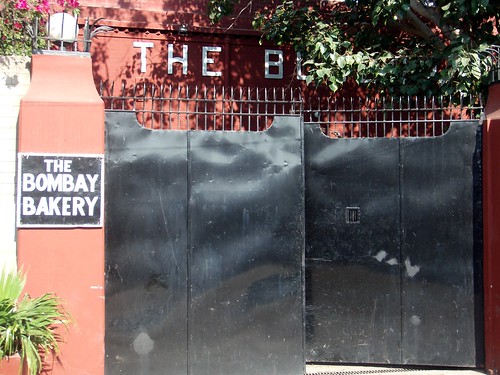 Read the captioned story in the Times of India today- politics of war mongering can be such a disruptive influence on ordinary lives. In Pakistan, we have shops and businesses named as Bombay restaurant, Bombay cloth house and even a Bombay sweet house. And of course Hyderabad’s premier bakery – the Bombay bakery as reminded by Kazim. I am posting an image of the Hyderabad outlet during my recent, fleetingÂ  visit to the city.

Deep down, the links continue despite 61 years of turbulence…

MUMBAI: Karachi Sweets in Mulund is not the only business establishment that bears the name of a Pakistani city. TOI came across at least seven shops, offices, halls and restaurants named after Karachi, Peshawar, Multan, Sindh and Lahore-most of the owners probably could never forget their hometowns that they had to leave during Partition.

“How can the MNS ban shop names like Karachi, Lahore or Sindh as most of the owners are refugees from Pakistan?” said a shop owner in Bandra. “Even my shop is named after a Pakistani city and we have been running this business for the past 100 years. A lot of sentiment is attached to the name.” He added that it was unfair to target innocent shop owners who have settled down in India and are patriotic. “We just carry a Pakistani city’s name on our signboard. We are true Indians and not Pakistanis.”

The owner of a business house involved in exports had to face trouble during 1993 riots. “The word Lahore appears in my firm’s name and some Hindu rioters presumed that we were Muslim. They came to ransack my office, but I had a picture of Ganesh in my office. They saw it and spared my office,” he said.

Another businessman, whose family had migrated from Pakistan, said, “We are into fashion jewellery business. We cannot change our brand name, which is named after a Pakistani city, just because the MNS wants us to.” His plea to Raj Thackeray was to spare Sindhi and Punjabi refugees. A south Mumbai shop owner said, “If there is a law banning all names involving Pakistan, then we will gladly change the names of our shops and offices. Till then, we should not be troubled.”

The BMC’s shops and establishments department does not raise Nostalgic shop owners refuse to change nameobjections on names given to shops. It checks that shop owners follow basic rules, like ensuring that the establishments use proper font size of names on signboards. “The names should be properly visible from a certain distance. Also, the names should be in the local language. The third point we check is the kind of lighting used on the signboard and last, the name on the board should match with that on the licence,” a civic official said.