Center of all centers, core of cores,
almond self-enclosed, and growing sweet–
all this universe, to the furthest stars
all beyond them, is your flesh, your fruit.

Now you feel how nothing clings to you;
your vast shell reaches into endless space,
and there the rich, thick fluids rise and flow.
Illuminated in your infinite peace,

a billion stars go spinning through the night,
blazing high above your head.
But in you is the presence that
will be, when all the stars are dead. 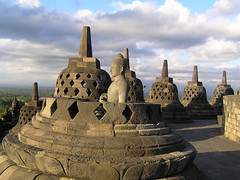 Next Post
I have two ways of loving You

25 thoughts on “Buddha at Borobodur”