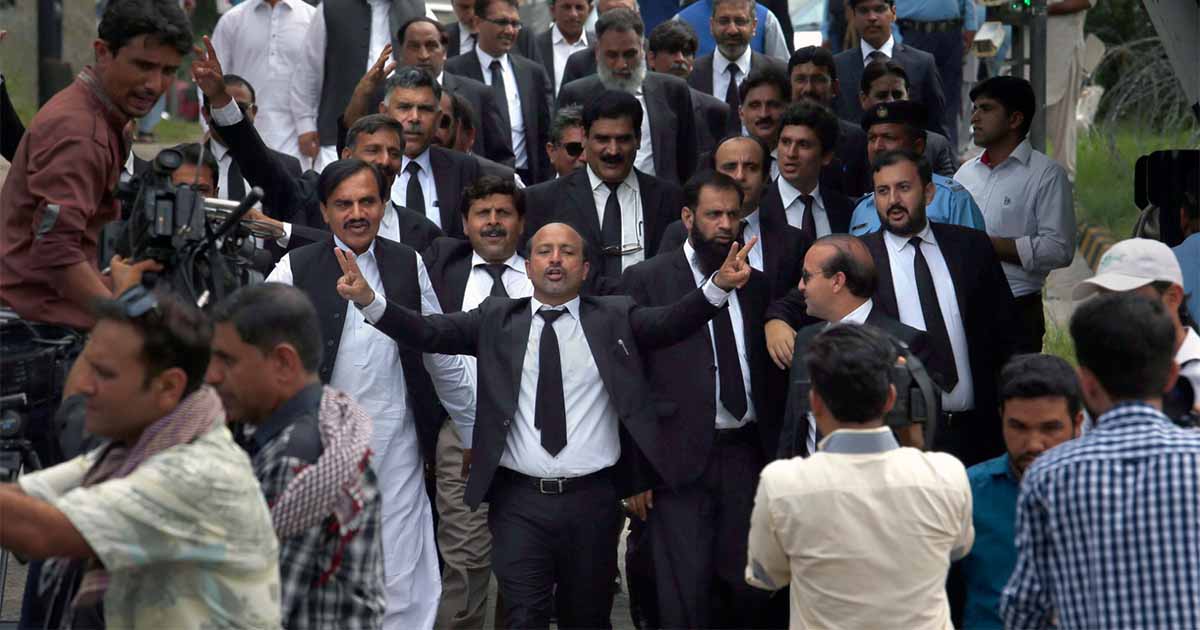 A piece that I wrote with Asad Sayeed for The Friday Times. This piece was written before the long March and the subsequent developments that include the restoration of deposed judges.

The two years old lawyers movement is now entering its decisive phase. It started in March 2007 as a spontaneous, vibrant expression of fatigue with a military dictator, after which the lawyers mobilised Pakistan’s inert middle classes and sections of civil society against the arbitrary ouster of the former Chief Justice Iftikhar Chaudhry, and his subsequent maltreatment at the hands of the security agencies. Within weeks, the political parties jumped into the fray and mounted a formidable challenge to an otherwise seemingly well-entrenched military rule. This was a critical year when General Musharraf had assured both the world as well as the nation of a transition to democratic rule. However, Musharraf’s efforts to direct the transition in his favour were forcefully countered by the lawyers through a judicial and political struggle that continues to date.

During 2008, elections were held, civilian governments at the centre and provinces were formed, and subsequently Musharraf was ousted, but the issue of the judges remained a bone of contention. The PPP government managed to restore most of the judges sent home under the November 2007 emergency proclamation – a first in Pakistan’s judicial history where judges deposed by military rulers were re-appointed with full seniority. However, the deposed Chief Justice was not restored. The reinstatement of the Chief Justice therefore became a rallying point for the lawyers movement and later it was the apparent cause of fissures between the PPP and PML coalition.

Now the secular and revolutionary lawyers are preparing for the second long march, and this time they have an array of allies in the form of various political parties. There is the PML (N) with mass support in the Punjab, the right wing Jamaat-e-Islami, and individuals like former ISI chiefs, a former bureaucrat-associate of Generals Yahya Khan and Ziaul Haq, as well as former President Ghulam Ishaq Khan. There is also the sports star turned politician Imran Khan, and a host of TV anchors and reporters who have emerged as a new power centre in the last few years. A common thread among the political supporters of the lawyers movement is a soft corner for the Taliban and a justification for their barbarity in the name of US excesses across the globe and in particular the bombing of civilians on Pakistani territory. Curiously, the consensus among these motley groups is the mantra that this is not our war. One would question how calls for rule of law would reconcile with prescriptions of jirgaas by Imran Khan and Sharia systems of justice by others. Strange bed fellows? Not really.

The complexion of the 1977 Pakistan National Alliance (PNA) movement against Bhutto also had a similar masala mix: from the religious right to the secular National Awami Party led by Wali Khan, Air Marshal Asghar Khan’s Tehreek-i-Istaqlaal and the dyed in the wool democrat, Nawabzada Nasrullah Khan among others. The liberals and the right-wingers joined hands to bring Bhutto down. Admittedly, Mr. Bhutto’s style of governance and also the threat to various interests, including that of provincial elites, had polarised the country. But the outcome of the PNA movement was not just inimical for the democratic system but for future generations as well, since the dark and brutal years of Zia-ul-Haq destroyed the very foundations of Pakistani society. Since the Zia era, we are still reeling under the state’s espousal of jihadi policy, the ascendancy of retrogressive forces, and political engineering along ethnic, biraadari , and parochial lines. True, the PPP and the PNA did come to an agreement in 1977, but before that could be implemented the ambitious General Chishty effected the coup d’etat sardonically called Operation Fairplay . Is it not ironic that the same General has today become an avid supporter of the lawyers’ movement without ever apologising to the nation for the monumental damage he did in the past, and for which he has never been held accountable? The constitutionalists of today have not questioned Chishty for his role in the sabotage of Pakistan’s only consensus Constitution of 1973.

The current imbroglio concerning the deposed Chief Justice, a pawn in the hands of political groups and super-ambitious individuals on the one hand, and a blundering and wavering administration led by Zardari on the other, has become virtually untenable. Over two thirds of the judges sacked by Musharraf are back in office, but since they were not reinstated with an executive order they are suspect and seen as betrayers of the lawyers movement and its lofty objectives. It is a separate matter that many leading lights of the movement have been appearing before the PCO courts to service their powerful, corporate clients, while hundreds of junior lawyers, especially those in the Mufassil districts have been out of business and have thus become fodder for public rallies and protests.

The leadership of the movement is a curious mix as well: a former Musharraf minister is a spokesperson for the Chief Justice, and corporate lawyers talk about revolution and social justice as if untrammelled accumulation of wealth was a divine byproduct of the strengthened rule of law. When the supporters of the movement chant slogans comparing a civilian elected President to a domestic pet, it provides an ominous insight into the level of respect that they have for the democratic process.

Recently, a top leader of the lawyers movement opined that the consolidation of the rule of law will lead to foreign investment, and that would bring prices down. One waits for him to elaborate upon this curious economic logic, which, if nothing else, will win him the Nobel Prize in the discipline. Others have held that inflation, poverty, terrorism, security and almost all the crises of the Pakistani state would be handled by the free judiciary, led of course by the individual of their choice.

The rise of Islamism and its associated militancy is also viewed through black and white lens the lawyers and their right wing supporters in the media, along with political parties, insist that the restoration of the Chief Justice will counter terrorism, and the influence of the US will be negated in domestic affairs. Missing persons who have been illegally detained by Pakistan and its allies in the war on terror are cited as a case in point. However, this is only one side of the story: the illegality of the method is deplorable and unjustifiable, but extolling the missing as warriors against US imperialism is not. For the operatives of militant groups make no distinction between a Pakistani and an American, between a military base and a girls school. The silence of constitutionalists regarding this madness being unleashed on us is worrying, to say the least.

But the solutions to Pakistan’s state crises are even more off-beam. The clamouring for justice takes place at the local level, not in the higher courts or even district courts. Social injustice is embedded in land relations, slavery, poverty and the denial of economic opportunity. Our judges have already undone the partial land reform of the 1970s, and have also bailed out financial cartels time and again.

By design or by default, the entire discourse around the lawyers’ movement ignores and by implication subverts structural changes that lie within the domain of legislative and political action. After all, who can deny that legal frameworks that disempower the poor are strictly the tasks of legislatures and representative executive authorities. We have enough rights rhetoric here too. But citing individual cases of judicial activism is neither here nor there. The Mughal bells of justice are a medieval legacy and cannot be revived, much as we would like to pander to the popular imagination locked in enlightened despots, judicial or otherwise.

Raza Rumi is a regular writer for TFT. Asad Sayeed is an economist based in Karachi