Found a great excerpt from Mohammed Hani’s novel, A Case of Exploding Mangoes where he recounts on his time at the Pakistani military academy during General Zia’s regime. 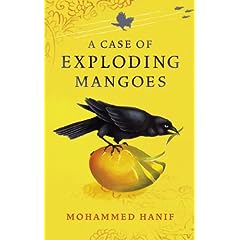 ONCE UPON a time, when I was 18, I found myself locked up in Pakistan’s military academy’s cell along with my friend and partner-in-crime, Khalid. We had thought we were doing charity work but the Academy officers obviously didn’t share our ideals. We had been caught trying to help out another classmate pass his chemistry exam, something he had failed to do twice already and this was his last chance to save himself from being expelled. The logistics of our rescue effort involved a wireless set improvised in the Sunday Hobbies Club, a microphone concealed in a crepe bandage around the left elbow of our academically challenged friend, and a Sanyo FM radio receiver. We were running our operation from the rooftop of a building next to the examination hall. We were caught red-handed, whispering a reversible chemical equation into the transistor. We were in breach of every single standard operating procedure in the Academy rule book, and faced certain expulsion. We had just started our glorious careers and now we faced the prospect of being sent home and having to explain to our parents how, instead of training to become gentlemen-officers, we were running an exam-cheatingmafia from the rooftop of the most well-disciplined training institute in the country.

For two days, while we waited in that cell to find out about our fate, we planned our future. Khalid, always the worldly-wise one in this outfit, immediately decided that he was going to join the merchant navy and travel the world. I tried hard to think what I would do. I came from a farming family where even the most adventurous members of our clan had only managed to branch out into planting sugarcane instead of potatoes. Education, jobs, careers were absolutely alien concepts. The Academy was supposed to be my escape from a lifetime that revolved around wildly fluctuating potato crop cycles. And here I was, already a prisoner of sorts, facing a journey back to a life I thought I”d left behind.