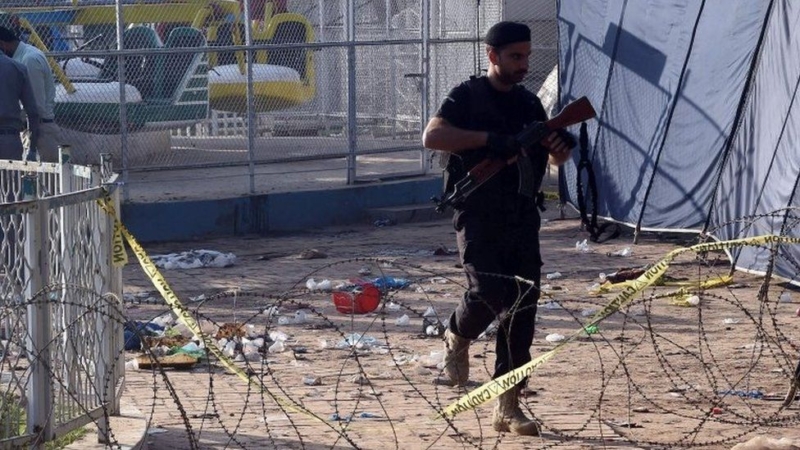 A splinter group of the Pakistani Taliban has claimed responsibility for killing at least 72 people in a heinous attack in Lahore at a popular park where scores of families had gone to spend their Sunday. Images of wailing mothers and a bloodstained park continue to haunt the people of Lahore, Pakistan and the global community at large.

Growing up in Lahore entails a relationship with its parks. Historically known as the city of gardens, it offers public parks like no other metropolis in Pakistan. The tradition is older, as before the merciless encroachments even the famed Walled City had gardens around it, remnants of which can still be found today. From the British-created Lawrence Gardens, now rechristened after the country’s founder, to the new ones, these parks are where most of Lahore’s population across class, faith and creed finds recreation, refuge and peace.

Gulshan-e-Iqbal Park, which was attacked on Sunday, is one such public space in Lahore. I was a child when the park was created amid a large housing development known as Allama Iqbal Town, named after the national poet Muhammad Iqbal. (Iqbal’s tarana is still a second anthem in India. Such are the contradictions of our nationalist frameworks.) The scheme was called sola sau acre (1,600 acres) and catered to the galloping housing needs of the middle class. One of my aunts found her abode there, and each time we visited her, a trip to Gulshan-e-Iqbal was mandatory for our entertainment. I still have some faded Polaroid photographs taken by the vendors there. The attack on my city is more than a news detail for me. It is intimately violent. A disquieting personal calamity.

Exactly two years ago I was also attacked in my own city. I survived that attack, but my companion did not and died on the spot. Another was injured. The list of victims is long and dreadful. I suffer from the burden of privilege that allowed me to escape the context to reclaim sanity, but the hapless families whose children died may not be that fortunate. As is the case that there are little or no trauma counselling services in Pakistan, and more often than not the perpetrators of such attacks remain outside the ambit of the justice system. More importantly, they are victims of a state that has not been too responsible towards its citizens, especially those surviving on the margins such as the poor, the minority groups (both Muslim and non-Muslim) and the ones who live in regions such as tribal areas where full citizenship is still denied through colonial instruments we conveniently forgot to reform.

The attack on Gulshan-e-Iqbal is the second in the area. In 2009, close to the park, a busy trading centre called Moon Market was also attacked. The bombing resulted in at least 60 deaths, and dozens were injured. Who knows what happened to them? Once again most of the victims were women, children and random passers-by. A spiritual healer, Dr Ahmad, who was a guru to a close friend, died in that attack. That was the day when Pakistan’s terrorism problem actually reached into my inner circle. And within years, it reached my own doorstep.

Punjab and its minorities

Admittedly, the period between 2010 and 2016 was one of relative calm in Lahore. The city is home to the Sharifs, and Punjabi civil-military elites that have wielded power for long. It also has a relatively well-functioning bureaucracy that in effect runs the province. But hundreds of kilometres away from Lahore, in the deep southern districts of the Punjab, the militant networks retain their bases and through a series of local compacts and coercion recruit young men including children as their foot soldiers. However, this militant infrastructure is not limited to the south, it is found in other parts of the Punjab as well. From the Deobandi hardliners to the Barelvi extremists who believe blasphemers should be murdered, they are also present here in good numbers. Some of them came to the funeral of Mumtaz Qadri, a police guard who killed Punjab Governor Salmaan Taseer for critiquing the blasphemy laws and for defending a poor Christian woman Asia Bibi, who is languishing in prison.

Lahore’s poorer areas and suburbs also host a large number people belonging to the Christian community. In fact, most of Pakistan’s Christians (2 per cent of 192 million) live in Punjab province. The majority belong to the working class and even in times of peace they have been the soft targets for the extremists namely the Taliban to assert their power and influence. Since 2010, militants have targeted churches in Lahore and elsewhere, settlements in Gojra (central Punjab), Joseph Colony (Lahore) and have lynched many, including, in 2014, a couple and an unborn child. In Gojra, a Christian family I knew since my childhood suffered. In Joseph Colony, I met so many whose homes had been burnt. Even though the provincial government helped in rebuilding homes, the scars take a long time to heal.

Sunday’s attack was also claimed by Jamaat-ul-Ahrar, the Taliban faction, as an attack on the Christian community. Herein lies the irony of terror’s indiscriminate nature. Thus far media reports show that most of the victims were Muslims. At least 14, according to my source in the community, were Christians. Most, however, were children. But the Taliban’s pronouncement had the desired effect for the media, especially the global media industry that is busy these days in fanning and unwittingly constructing an Islam versus the West narrative.

The brutal reality is that more than 60,000 Pakistanis, of all faiths, have died in terror attacks in the last decade. This is a story that gets overshadowed in the narratives on the Pakistani state’s flawed policies. The people have a limited say in national security policies (and choice of instruments). They have no choice but to survive, as the resilience of Pakistanis turns into a contemporary cliche.

Due to insecurity, public opinion in Pakistan has swung in favour of targeting the violent extremists. The military is not immune to it, and one of the reasons that it has been engaging in a major battle with the Pakistani Taliban is the pressure from within the ranks as well as the public that views the military as the only institution that can take on the militants. The national action plan a set of disparate measures to fight terror is underway but it still has to reach the militant bases in Punjab and regulate the seminaries.

Not only by military means

After Lahore’s carnage, the military has stepped in once again to strike at the militant hideouts in Punjab. The civilian governments federal and provincial led by the Punjab-based Sharif brothers, Nawaz and Shehbaz, respectively, may be a little nervous. Public opinion will welcome this initiative. As a short-term measure this may be useful. But in the longer term it is the civilian government and a reformed administrative apparatus (including the police) that need to take charge of internal security. Militancy cannot disappear until a holistic view of extremism, justice and citizenship is taken by the state, and especially Parliament. Even more urgent may be the re-crafting of national security doctrines. The value of proxy militias to achieve strategic objectives has diminished, turning into a grave peril for the country itself.

In the meantime, Lahore mourns, shudders and carries on. The way it has for hundreds of years.