KM and I have known each other for ages. There were days when we were at school and the height of excitement of pre-globalized Lahore was visiting friends. So we would plan our visits and then sit for hours and talk. Random, intelligent and human stuff.

And, then our lives expanded so to speak when we arrived in London as undergraduate students, lost and a little disoriented in a college with thousands of students. I remember that we watched “The Unbearable Lightness of Being” together and few other alternative films. KM was a little shocked at the Kundera’s hedonism. There was one that KM did not find too exciting. Perhaps it was Greenway’s “The Cook, The Thief, His Wife and Her Lover“. Of course we were growing up and finding our little paths and dealing with our demons and gods. KM also introduced me to Said’s Orientalism among other vignettes of life and living. But then we lost touch as it happens in the Ghalibesque speed of life where the rider has no control of the speed of life-horse. 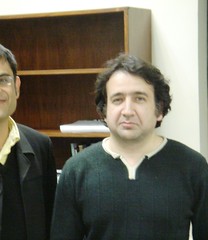 In a decade and a half, KM earned his well deserved doctorate while I only mused and debated the idea. He is now a full-time academic at a renowned private University in Lahore. So after this hiatus, we were connected through the blogosphere. KM has a wonderful blog laced with poetry, art and fine writing. And, we were writing to each other until this January when we met on a dull winter day in Lahore. KM introduced me to another friend T who happens to be the scion of a Sufi household and we had a great afternoon at the University premises chatting away with cookies, crisps and mugs of coffee.

Quite delightful – reclaiming an old friend from the silly maze of an otherwise unfathomable life.

The picture above was taken by T, the Sufi who went astray and teaches economics now.

Next Post
Imam Hussain: The Beloved of the Beloved