Ghalib’s grave – treasury of meanings is under the ground 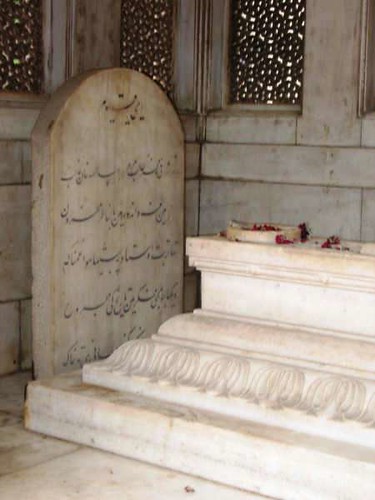 The inscription on Ghalib’s tomb-stone in Arabic and Persian followed by translation:

the qita (composed four verses) Â is by Mir Mahdi Majruuh; the phrase contains the chronogram of 1285 AH

The Alive, The Eternal [these are two of the names of Allah]

[Urfi and Talib were Persian-Indian poets]

yesterday in sadness and mourning, grief-afflicted too

I sat by the Master’s grave with sorrow profound

a heavenly voice said, “treasury of meanings is under the ground”

translated into English by Vasmi Abidi

(From the archives) October 18: Attack on Benazir Bhutto’s rally at Karsaz, Karachi
Book E-Launch – The Battle For Pakistan: The Bitter US Friendship and A Tough Neighborhood
Pakistan’s Youth And Their Concerns: A Discussion
Legacy of Bhagat Singh – India and Pakistan’s Shared Hero