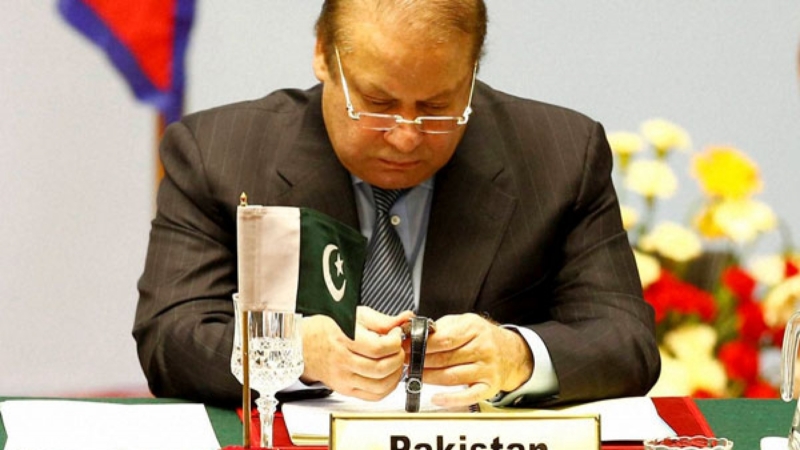 The third term of Prime Minister Nawaz Sharif has been far from smooth. Beset by challenges of governance and a strong opposition, he has survived and is likely to continue in office unless he opts for an early election. The opponents of PM Sharif are chagrined at his ability to sail through many a storm. But this continuity is not a bad thing for evolution of democratic process in a country where few elected Prime Ministers have completed their terms.

Since 2013, the Nawaz government faced three major challenges. First, the thorny relationship with the military establishment, rooted in the historic nature of intra-state power dynamics of Pakistan. Second, tackling at least two major rounds of street protests engineered by the opposition leader Imran Khan with full support of sections of sympathetic media. Third, the Panama papers scandal that exposed offshore companies owned by Sharif family raising serious questions on the financial probity of the ruling family. Close to completing four years in office, Sharif has weathered the storms and survives in office.

The Panama verdict is far from a victory for PM Sharif. Even though the majority of Supreme Court judges did not find the evidence presented as strong enough to disqualify him, the investigation against Prime Minister and his family will continue. With the inclusion of military intelligence outfits into the investigation, this process will be far less manageable for the PM and his cohorts. In any case, the investigation is not going to be an easy one. Given the lack of expertise in white collar crime amongst the members of the Joint Investigation Team announced by the Court, it would be nothing less than a daunting task to prove Sharif’s alleged crimes and misdemeanours.

The options for PM Sharif are clear. Ideally, he should step down and let an impartial inquiry exonerate him. Alternatively, he could move to an early election and seek a fresh mandate from the electorate to restore his moral right to govern. The least desirable and most likely option will be to continue in office and move towards the elections due in 2018. And this course of action is going to result in increased pressure from the opposition and public opinion formed by media driven by notions of urban middle class morality and an active participant of Imran Khan’s grand narrative of corruption as the problem numerouno.

This is why PM Sharif and his kitchen cabinet need to ponder these choices as to what may cause the least damage to the party’s credibility in the next election. A fresh election is not a bad option for the party as its opposition is both disunited and ill prepared to win the electoral game. For all the media hype about Pakistan Tehreek-e-Insaf, its capacity to change the electoral outcomes in its favour, especially in the Punjab province, is seriously limited. The other major party Pakistan People’s Party is virtually annihilated in the northern and central Punjab and there are no signs of even a feeble recovery. This leaves the field open to Sharif brothers who are the only game in town when it comes to the Punjab. And, as we know, the road to PM House in Islamabad passes through the Punjab.

With solid infrastructure development projects under their belt, the Sharifs have much to offer to the urban electorate. Perhaps the only issue of concern is the electricity crisis, which seems to be getting out of hand. The elections of 2013, at least in the Punjab, were a referendum of sorts on which party can deliver uninterrupted power supply to households and businesses. On this front the Sharifs have faltered and if they go for an early election then they need to fix the energy crisis within weeks, if not days. It will mean more indebtedness but given its profligate spending on infrastructure the Sharif administration is not shy of accumulating more debt to pay to the power companies.

The Panama verdict has also resulted in another unstated victory. While PM’s daughter Maryam Nawaz and the likely successor – yes that’s the way dynastic model works in South Asia – has not been explicitly exonerated in the Panama verdict, she has not been penalised either. Critics of Sharif have been raising the issue of Maryam holding official meetings and acting as the de facto PM, but these issues are irrelevant for much of Sharif voter base. PML-N’s vote bank is galvanised around Nawaz cult. This is not changing anytime soon.

The political temperature will soar during this summer. PM Sharif will have to make a few crucial choices that include a credible political response to the dissenting judgement of two Supreme Court judges who think he is not fit to hold the office and has indulged in financial improprieties.

But those who wanted Nawaz to be ousted in 2014, 2016, and 2017 will remain disappointed. He is not just a popular politician but also carries thirty-six years of political experience and firmly maintains inroads into Punjab dominated establishment.