Once renowned as a city of gardens and monuments, Lahore now manifests decaying cultural heritage, rampant urbanisation and unregulated commercialisation. The monuments of Lahore, whether great or small, suffer from lax conservation efforts, if any at all. In fact, the lesser ones are in a tragic state of despair. Among these, several old heritage monuments are nearly obliterated.

Lucy Peck, the author of Agra: The Architectural Heritage on a recent visit to Lahore said that â€œshe found it very depressingâ€ because she was looking forward to visiting a couple of historic mosques. The Chinian Wali mosque, which was once decorated with kashi tile work, has been resurfaced with modern tiles, done in a crude kasha style. And the Sheranwala Gate mosque has disappeared completely except for the mehrab niche, Â which is still there.â€ Bhadhar Kali Mandar, a Hindu temple believed to be over 2,000 years old and situated east of Thokar Niaz Beg on the southern outskirts of Lahore, is facing decay and destruction. The temple has a central building with a huge pool in the centre that was once fed by 12 wells through an indigenous drainage system. Its walls had beautiful frescoes, some of which have managed to survive over the centuries. At one point in time, this temple would host the biggest Hindu festival in Lahore.

According to Haroon Khalid, a cultural researcher, writers such as Kanhiya Lal Hindi and Abdul Latif have mentioned this festival in their works. This temple is visible from Multan Road with its plinth six feet high from the ground and the temple structure itself rising to approximately 20 to 25 feet. When Khalid contacted the archaeology department office situated in the Lahore Fort, an office representative said he was ignorant about the temple, suggesting Khalid contact the Auqaf department which, in turn, said the temple was not within its jurisdiction. Since Partition, the old temple lies abandoned and its walls have become fragile. In order to ensure the safety of those inhabiting the temple, local residents have decided to demolish it and construct quarters without the permission of any relevant authority. 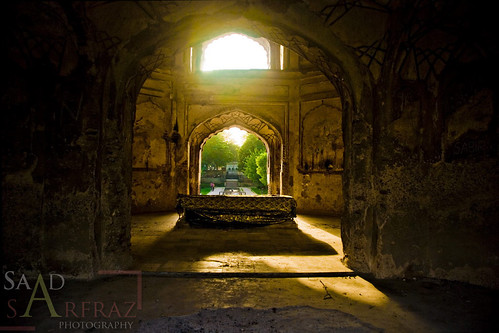 Adjacent to the shrine of Sufi saint Hazrat Mian Mir is the tomb of Nadira Begum Bano, wife of the Mughal Prince Dara Shikoh, the ill-fated heir to Shahjehanâ€™s throne and the crown prince of his Indian empire. Unlike other Mughal tombs which have been constructed in the midst of gardens, Nadira Begumâ€™s tomb is built amidst a water tank without a dome, bearing a flat parapet on all four sides and appearing more like a pavilion. During the British Raj, the tank was dismantled and its bricks were recycled and used to build the Lahore Cantonment. During the Sikh period, the tomb was robbed of its costly marble and semi-precious stones. Today the building retains a simple and blank facade, shorn of all ornamentation.

Photographer Saad Sarfraz Sheikh having documenting the tomb for years, says it was declared a protected monument in 1956 and since then responsibility for its conservation lies with the archaeology department. In 1956, a comprehensive scheme was framed by the department for its repair and restoration. Evidently, this scheme never materialised.Â

Similar is the situation of the dilapidated Buddhu Ka Awa, located across the road from the University of Engineering and Technology in Lahore. Its historical significance is unclear. It is variously said to be the tomb of Bhai Buddhu, a brick potter during the reign of Shahjehan, or the tomb of Yamin-ud-daula Khan-e-Dauran Bahadur Nusrat Jang â€“ a nobleman of the Mughal court who died in 1643 â€“ and his wife. Sikhs consider it part of a gurdwara complex built by Bhai 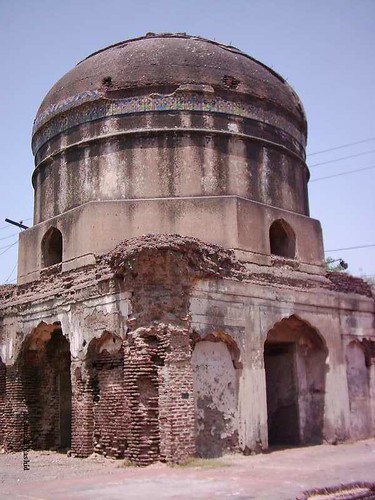 Buddhu in the â€œsacred memoryâ€ of Guru Arjan Dev. It is widely believed to have served as the home of General Paolo Bartolomeo Avitabile, an Italian soldier who served in the Napoleonic Wars and was later hired by Maharaja Ranjit Singh to serve as his military commander. Later on, in the tumultuous times of inter-Sikh wars, Maharaja Sher Singh and Raja Hira Singh camped around the site with their troops to lay siege to Lahore. With the ghost of such past beauty still lingering about the current eyesore of a structure, this is a square building constructed on a brick platform with a long neck- like dome built on an octagonal drum. The dome seems to have been covered with glazed sky-blue and yellow tiles with floral designs where once the arches on each side of the building were covered with paintings. As was the custom in those days, the mausoleum was surrounded by a large neatly, trimmed garden.

Today it is situated amidst an unkempt garden behind a small wrought-iron gate; the paintings inside it are now blackened with soot while unpleasant litter found strewn all over. Amir Qureshi, a heritage reporter, remarked that the tomb is now â€œa relic which will vanish even before we would know about it.â€ In the residential part of Bhogewal village is a beautiful 17th century baradari originally intended to serve as the tomb of Mian Khan, son of Mian Saadullah Khan â€” the prime minister of Lahore during the reign of Shahjehan. The baradari is built on a raised platform covered with Chinioti black stone with floral patterns bordering the roof. Two identical mosques were originally built on the west and east ends of the garden, one for prayers and one for architectural symmetry. The monument was pillaged during the reign of Maharaja Ranjit Singh but Maharaja Suchet Singh, commander of Ranjit Singhâ€™s cavalry brigade, renovated it, turning it into a garden known as Raja Suchet Singh Bagh. With the arrival of the British, the monument was auctioned off to Nawab Ali Reza Khan Qizalbash, who carried out extensive work to revitalise the site. Today this monument is surrounded by a quiet garden. For how long its present condition is maintained, one canâ€™t tell.

Hundreds, and if one were to include the Mughal traces in Lahoreâ€™s Baaghbanpura and walled city areas, thousands of monuments await protection and conservation. Other than a handful of success stories where privately-owned havelis have been restored, the general state of Lahoreâ€™s rich, variegated past is mournful. This is especially tragic given that architectural heritage symbolises and presents opportunities for human development.

As the Aga Khan Cultural Services, an international non-governmental organization working in the field of archaeological conservation, notes that the potential of heritage â€œhas to be properly acknowledged and activated at different levels of human existence, from the spiritual to the emotional and to the physical realm. There are important indirect benefits which can be obtained by using the built heritage components as a catalyst for wider social and physical upgrading of the surrounding environment.â€

Unfortunately, the piecemeal restoration works initiated through government schemes have an overt focus on beautification and working in isolation from the historical and cultural context of monuments. It is the wider social and economic context â€“ the communities surrounding heritage sites and their lives and livelihood â€“ which need to be channeled for long term and sustainable conservation.