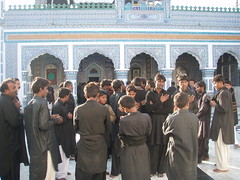 It irks me when I hear simplistic platitudes on Pakistani society, state or people. The heterogeneity of Pakistan is by itself an anthropologist’s dream, a planners’ headache and a sociologist’s challenge. Despite the sixty-one years of drumming the uniform nationalism mantra, Pakistan’s regions and their peoples refuse to toe the line sponsored by the official textbook masters. This is why one minute there is a delightful speech on being a Pakistani and the other minute caste, tribe or ethnicity raise their discrete heads and the linear formulae dissolve into thin air.

Recently I was in Karachi and discovered that the drawing room chattering there was vastly different from that of Lahore’s. The immediate urban crises of the Sindhi capital overshadow discussions that the Punjabi heartland loves to indulge in. The war mongering that has been a recent pastime on TV channels and in influential quarters of Lahore, is looked at with suspicion and, dare I say, contempt by many Karachi wallahs. It was refreshing to be reminded that, much in line with South Asian history, Pakistan is a diverse, multifarious place. That this country cannot be boxed easily and therefore appointed labels dissipate easily. 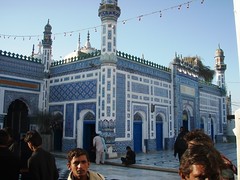 Taking advantage of my Karachi trip and also of a special invitation on my blog from the town of Bhitshah in Sindh, I ventured after a long time into the remote interior of the Sindh province. Bhitshah is not too far from Karachi but thanks to my middle-aged chauffer Sadru with a hyper-active imagination, I managed to see quite a bit of the countryside. Despite my clear advice on the destination â€“ B-h-i-t-s-h-a-h â€“ Sadru, drove me almost to Sehwan, the small town where the great mystic Lal Shahbaz Qalandar is buried. We crossed Jamshoro, almost a university town, and many other milestones until I could see Sehwan everywhere and Bhitshah nowhere on the road-signs. That’s when we realised that we had lost our way. We then had to turn back even as Sadru, after going through the ritual of a half-hearted apology, wryly wondered if my calling was for Lal Shahbaz instead. 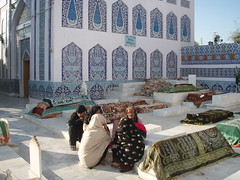 Could it be? Well, one has to be a member of the Mystics’ Society Incorporated to understand such signs. But irrespective of my bonding with such a mysterious world, there’s no doubt that even the most rational of readers would find the landscape of Sindh a tad mystical. The sense of space, the emptiness waiting to be filled in and the quaint air could never go unnoticed. The songs of love and union, of separation and longing are so deeply embedded in the cultural moorings of the Sindhi heartland and only after listening to them would you begin to appreciate why Sindh is called the land of the mystics.

But mysticism apart, it was the iconographic presence of Benazir Bhutto or shall I say the Bhuttos, that was hard to miss. Who knows how popular Benazir would have been today if she had lived, but her tragic assassination has surely made her a Sindhi legend like Marvi, Sassi and Bakhtawar.

After these not too unpleasant meanderings, we reached Bhitshah and a long cherished wish of mine finally came true. My host, a young film-maker by vocation and a gaddi nasheen prodigy by birth, took me around the town. The tomb of Shah Abdul Latif Bhitai (1689-1752) constitutes the life of this little place. Everything is centered on it, almost by design. There were people who had come from distant places to spend a day or two at the shrine. The mood was far from sombre. It was like being in the midst of a public festival with lots of chatter, action and devotional music of outstanding quality. I lost myself in the rhythm of the dergah leaving poor Sadru a little nonplussed at my affinity for the saint, his poetry and a more than charitable view of the Sindh province. Soon the interaction between Sadru and myself turned a little unreal by Pakistani standards as we had to shed prejudice and engage at a purely humanistic level.

When we sat in the courtyard, sharing a platter of langar pallau , Sadru whispered that this was a relatively empty place as Sindhis were now more inclined to make a pilgrimage to Garhi Khuda Bux, the burial place of the Bhuttos, rather than the Sufi shrines. As he laid out his reasons, Sadru broke down in tears and chanted the Benazir-innocence spiel. A moustached man in his late forties crying for a slain leader even after a year of the tragedy was not an ordinary sight. I was touched. 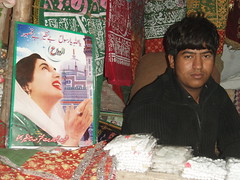 Later, as we hunted for ajraks and other memorabilia, I was a little overwhelmed by the posters and pictures of BB being sold along with the spiritual souveniours such as chadors, tabrauk and roses for the shrine. As a typical tourist, I took pictures only to reprimand myself later that certain sights are to be felt and imbibed, not ‘captured’.

The return to Lahore via Karachi allowed me to traverse many worlds: the posh Karachi housing stocks, the slum where I dropped Sadru, the cultivated, antiseptic, inefficient Karachi airport and, of course, the Lahori universe, my home.

While driving back to my house, we stopped at the petrol pump and the long queue prompted the taxi driver to complain how Zardari government had caused the shortages-havoc in Lahore, the capital of the Punjab; and how intolerable he was! That made me a little squeamish but it was nothing. The icing on the cake was when the next day my son, who turned seven last week, arrived from school and shared a little secret. His best friend had told him the name of the real murderer of Benazir Bhutto; and guess who it was! Well, it cannot be printed as TFT is a responsible publication. But it was the name, initials of which encapsulate the range of the English alphabet. The worst kept rumour, indeed!

So, here I am trying to make sense of it all. But I cannot.

* First published in The Friday Times