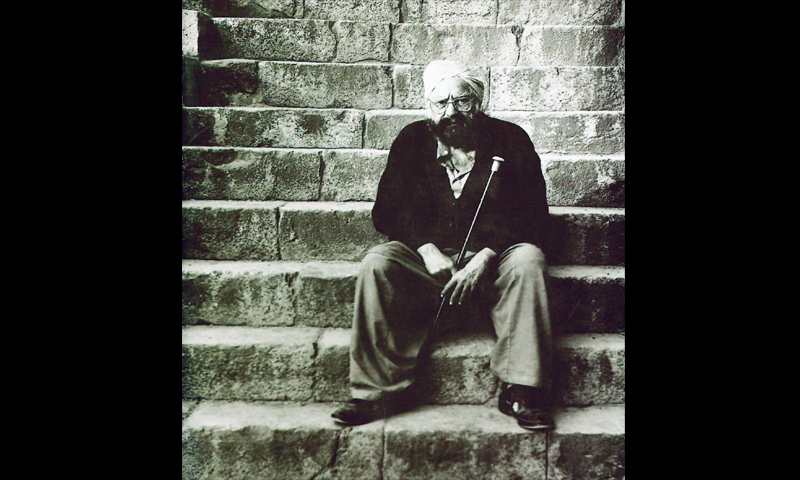 My tribute to KS (first published in DAWN on March 30)

IT is difficult to evaluate the legacy of writer, journalist and an icon of our times Khushwant Singh who passed away last week after leading a full life that many would dream of leading. Singh was immensely popular in Pakistan. For the past two decades I have spotted his books  legit and pirated  at almost all bookstores in every city. His writings had an impact and inspired generations to emulate his incomparable style. His larger than life stature in India was equally recognised in Pakistan.

Singh was born in Hadali village (now in Pakistan), lived in Lahore and until his last never disowned his roots. Such was his worldview that Partition and the ensuing bitterness did not change his empathy for Pakistan. This is why many Pakistanis were his friends and he gave them due attention, respect and time. A photograph of his best friend from pre-Partition days, Manzoor Qadir (jurist and Pakistan’s law minister under Ayub Khan) was displayed prominently in his living room.

It was Singh’s stature in the world of Indian journalism that is perhaps unprecedented for its influential relationship with readers. As a critic of the establishment, Singh guarded his intellectual independence. His proximity to Indira Gandhi and a brief period of closeness aside, he remained a fierce commentator on all things political and cultural. Singh for example returned the honours awarded to him after Gandhi’s operation at the Golden Temple in the 1980s. Over time, his column With Malice Towards One and All became a regular window of refreshingly fresh and iconoclastic commentary. Singh’s attitude to Pakistan was always irksome for the rightwing Hindus and often he would get hate mail, which was a source of amusement to his expansive spirit. Of course Singh came from a privileged background and things were easier for him compared to a lot of writers and journalists across the region. But he did give up a career in law and diplomacy to become a writer. And a prolific one at that.

The personal anguish of Partition provided the impetus and inspiration for Singh best-known and perhaps most poignant novel  Train to Pakistan (1956). Its direct language, wry observations and powerful imagery set the tone for post-Independence fiction in the subcontinent. The novel recounted amity that existed between Sikhs and Muslims in a Punjab village Mano Majra, only to be upturned by the violence of Partition. For a novel dealing with such a problematic theme, Singh remained upright and refused to underplay his staunch faith in humanism. In his obituary for Manzoor Qadir, he wrote: My closest friend of many years lay dying; I could not go to his bedside. His wife and children were only an hour and a half’s flight from me; I could not go to see them. I could not ring them up nor write to them. And when he died, I was not there to comfort them. They are Pakistani, I am Indian. What kind of neighbours are we? What right have we to call ourselves civilised?

Singh’s style evolved as it became more barer, sharper and at times utterly irreverent. Nearly a 100 odd collections of his columns, short stories and novels were published making him arguably the most widely read English writer of our times. After his debut novel, Singh’s books I Shall Not Hear the Nightingale (1959), Delhi: A Novel (1990) and The Company of Women (1999) made their mark on the literary scene. Loved or hated, they were not ignored and it is difficult to keep track of the editions that came out. A candid autobiography, Truth, Love and a Little Malice (2002) was also hailed as refreshingly unconventional and displayed how Singh never took himself seriously, a trait that is not so common among writers and journalists in the subcontinent. Such was his brand and his dedication to letters that even in his 90s he was working on books.

His last novel, Sunset Club was published in 2010 at the age of 95. It is a peculiar book for its honesty outlining the concerns and reveries of octogenarians. Other books include Absolute Khushwant: The Low-down on Life, Death and Most Things In-between (2010) with Humra Quraishi and a collection of profiles, The Good, the Bad and the Ridiculous (2013). This was his last book and will always be remembered for outstanding insights into the lives of eminent personalities of our age including Jawaharlal Nehru, Indira Gandhi, Sanjay Gandhi, Amrita Sher-Gil, Begum Para, Muhammad Ali Jinnah, M.S. Golwalkar, Mother Teresa, Faiz Ahmad Faiz, Jarnail Singh Bhindranwale and Phoolan Devi.

His penchant to say things the way they are can be assessed from this excerpt when he talks about Nehru, India’s first prime minister:  What I admired most about him was his secularism. He was a visionary and an exemplary leader; the father of Indian constitutional democracy, of universal adult franchise, the five-year plans, giving equal rights to women, among other things. He was better educated than any of his successors, with the exception of Manmohan Singh, and spent nine long years in jail reading, writing and thinking about the country’s future.

But being human, Nehru had his human failings. He was not above political chicanery. Having accepted the Cabinet Mission plan to hand over power to a united India, he reneged on his undertaking when he realised Jinnah might end up becoming prime minister. He had blind spots too. He refused to believe that India’s exploding population needed to be contained. He refused to see the gathering strength of Muslim separatism which led to the formation of Pakistan. He failed to come to terms with Pakistan and was chiefly responsible for the mess we made in Jammu and Kashmir. He was also given to nepotism and favouritism.

Perhaps the most readable account on the history of Sikhs remains the two-volume collection that he wrote. In his trademark style Singh took the readers through centuries of evolution of the Sikh order  from spirituality, fusion of cultures and beliefs to the later espousal of martial values. In the process he did underscore the importance of prophet and monotheism derived from the Islamic/Sufi influences. In his accounts of Mughal rulers and the gurus, Singh remained dispassionate and fair.

In another book, The End of India, Singh was forthright in countering the Hindu extremist narrative in these words: The feeling that Hindus had been deprived of their legacy and humiliated by foreigners had deep roots. For eight centuries, Muslim dynasties had ruled over the country, and many Muslim rulers had destroyed Hindu temples this was not peculiar to the Muslim rulers of India. In almost all ancient and medieval societies this was the norm. Hindu rulers too, for instance, had persecuted Buddhists and Jains and destroyed their places of worship.

A key factor that made his English writing unique was his ability to use the idiom, verses and sensibility that he had picked up from his native Punjabi and Urdu. Singh belonged to the era when Urdu language was taught and imbibed in North India as a language of culture and even commerce. English was an official requirement but knowing one’s literary heritage was essential to education. Both India and Pakistan have abandoned this worldview and the English and vernacular worlds have drifted even further.

Singh’s self-confessed agnosticism enabled him to poke fun at the religious extremists and those who followed rituals blindly. A voice of reason connected him with millions across the subcontinent who had (and continue to suffer) the crimes and misdemeanors committed in the name of religion. Despite his affinity with the Sikh identity, Singh opposed the idea of Khalistan.

One of Singh’s book Sex, Scotch, and Scholarship, projects the persona he wanted to cultivate in the public domain. Not unlike Manto, Singh references to sex and raunchy behaviour were more academic than a lifestyle choice. For Manto it was a subject of psychological lives of his characters and for Singh it was to shock the Indian middle-class readership that until a few decades ago remained locked in Victorian mores.

It was a privilege to have met Singh on a couple of occasions in Delhi courtesy my friend Sadia Dehlvi. Singh living room had a kalma sign and several symbols of what may not be commonly found in non-Muslim homes. I will always remember his affection and wrote about these meetings in my book, Delhi By Heart published last year.

Singh represented an era, a century of upheavals that transformed India from a colony to an independent nation, created Pakistan and also braved challenges of modernity, nationalism and rise of religious extremism. His honest voice and scathing literary style are much more than journalism or plain fiction. They give us insights into the workings, ebb and flow of a civilisation and above all remind us that humanity can survive even in the most trying of circumstances.

There shall be no one like the scotch-loving Sardar. Well before his obituaries he had mocked himself: I would like to be remembered as someone who made people smile. A few years ago, I wrote my own epitaph: Here lies one who spared neither man nor God; Waste not your tears on him, he was a sod; Writing nasty things he regarded as great fun; Thank the Lord he is dead, this son of a gun.

In celebrating his pluralistic literary roots, Intizar Husain was a