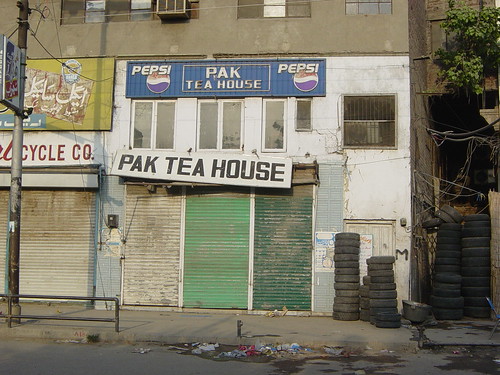 Intizar Hussain, the eminent writer of Urdu, recently mused on the Lahore of yesteryears and the literary and intellectual atmosphere. I am posting a few excerpts from his heart-felt piece:

Not far from the coffeehouse there was the Pak Tea House which closed down recently. Even those who never cared to visit it were seen shocked at this cultural catastrophe. How earnestly they struggled for its restoration, but frankly speaking, even if restored it could no longer be the kind of teahouse that it once was. Times have changed; the city has lost its cultural character and opened its arms to commercialisation.

It was a different world when coffeehouses and teahouses flourished. They flourished in the background of a rich restaurant culture, which distinguished the Mall from other cultural spots of the city. Those sitting there were never seen in a hurry. They could afford to sit for long hours discussing ideas and ideologies over a cup of tea. Each literary theory had its protagonists, who when engaged in a discussion gave the impression of being the defender of a noble cause most dear to them. And it was not simply an intellectual exercise with them. What they discovered as truth in the process of their literary or intellectual thinking stayed as an article of faith with them.

Such were the devoted souls for whom ideas and ideologies meant more than worldly benefits. It was because of them that certain restaurants gained a cultural status. Now we are living in a different world. This world cannot afford to have such souls and such haunts within its fold. The age of coffeehouses and teahouses is gone. Food streets are now the hallmark of life in Lahore.

Yet there is hope – such as this intent by a well meaning intellectual on Pakistaniat.