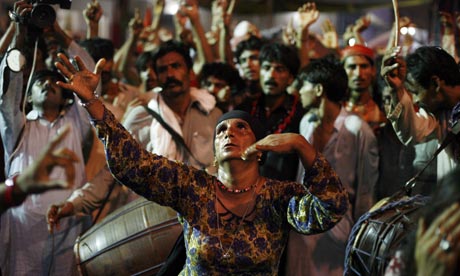 Lal Shahbaz Qalandar‘s shrine is full of devotees these days. His Urs is a major cultural event in Sindh. The Qalandar has followers across the Central and West Asia and his shrine and festivities around the Urs are an important part of Sindh’s spiritual and cultural landscape. The Qalandar was also a part of the wider Chishtia movement in the subcontinet in the twelfth and thirteenth centuries.

His shrine even today is an inclusive space for all religions, classes and castes.

This report paints an interesting picture:

In the colourful crowd, Sunnis rub shoulders with Shias and Muslims eat and drink with Hindus, using same plates and glasses. The Sufi culture of the Subcontinent, which breaks the barriers of cast, colour and creed, is witnessed in its most magnificent and harmonious way during the celebrations.

“Neither the power of crowns and kings nor the might of armies equals the force of a Qalandar.”

Update: Sadly, I just read that there were deaths today due to sheer mismanagement and negligence at the shrine. What a pity! May God bless the souls of those who died in such unfortunate (and uncalled for) circumstances.