Saba Bhaumik’s opinion piece in Outlook India once again attempts to explain why Indians may not be madly in love with Arundhati Roy while the West supposedly is but Bhaumik doesn’t say anything that hasn’t already been said a million times: Indian males are envious coz Roy is smart, the women are confused by her outspokeness and, while Roy’s hair styles challenge beauty norms, her sense of style sets dressing trends. 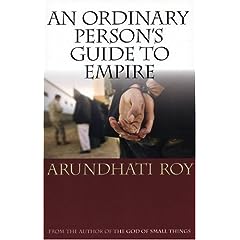 Ye Gods, cries the plaited, sari wearing, stay at home Indian woman according to Bhaumik, how does Roy do it. Bhaumik should get off the looks wagon–traditional or modern– and go straight for the brains– Roy’s politics. I do think Bhaumik has a point about Roy’s controversial politics and how her views have made her a household name in many worlds but it would have been stronger to have cited reasons other than

the Sunday Times carried a full-page article that somewhat absurdly equated Roy with Victoria Beckham, both described as “role models for young British women”. Ridiculous as the comparison between a sexy footballer-wife-pop-star and a serious novelist-essayist may be, it does reveal that Roy has been an icon in the West for some years now.

Roy’s greatest crime of course is that of perceived anti-nationalism i.e. not yelling, pompoms aloft, ‘East or West, India is the best.’ How popular would Roy be if she was American– or lived in America– and did not say ‘East or West, America is the best and always right’? Or in any country where she was to go against the status quo? Roy’s ‘style, articulation and high profile causes’ may get her attention in the West but is she really an icon? Do women and men look to her for courage to stand up for the depressing issues of the day be it how ‘really’ poor people are going to fend for themselves, or whether a particular ‘terrorist’ (‘freedom fighter’?) is guilty or framed? Recently Arundhati was on the US radio show Democracy Now saying that, when she talks to journalists from the West, all they want to hear is how absolutely great things in India are and how the great is getting greater by the day. If she goes against that she’s suddenly not the most popular guest around. I must add that it hardly escapes notice how journalist after journalist never fail to mention how petite and pretty she is and of course what state her hair is in. If she was obese and plain looking and had ratty hair how much attention would anyone give to what she has to say? Or would her words have more weight, no pun intended? As for Bhaumik’s supposition that ‘most of us still think of Roy as a Booker Prize winning author of a novel we have never read’, I’m assuming she means that Indians have not read it and, with that assumption, I’d like to know which Indians she’s talking about because, if there’s one novel I would think they’d actually have read, it would be The God of Small Things. This is certainly true in Pakistan where Rushdie’s ‘Midnight’s Children’ and Naipal’s ‘A House for Mr. Biswas’ may grace many an English reader’s bookshelf but it is Roy’s lone ranger that has actually been read.

An Ordinary Person’s Guide to Empire is Roy’s essay on modern day imperialism and the Bush administration. Read a reviewÂ here.