My poems have been published – finally

This is the first time…

Two poems of mine have been published by the international poetry digest, “A Hudson View” in its Spring 2008 collection.

I had submitted the poem that I composed on the assassination of Benazir Bhutto – the original was in Urdu but I trans-created it. Two lines are always on my mind:

And, We, your murderers, impotent accomplices,
Cast guilty shadows across this barren land 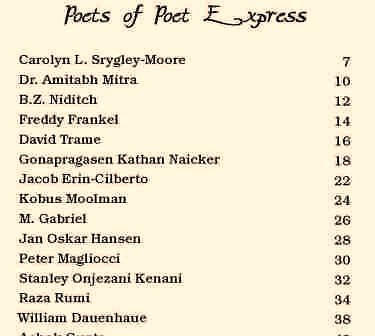 This poem was composed in Rawalpindi when I visited the place where Bhutto was murdered.

Also published is an earlier melancholy poem that was inspired by an Urdu version written after a visit to Lahore’s majestic Shalimar Gardens – a few lines, again:

The remains of the day
We bequeathed to Shalimar.
A child smiling
And the shades of jaman tree
All visions melted in a purple dream

I still have to see the digest as the air[snail]mail will take its time. But it was good to see my name in the table of contents – that I have conveniently cropped…

73 thoughts on “My poems have been published – finally”