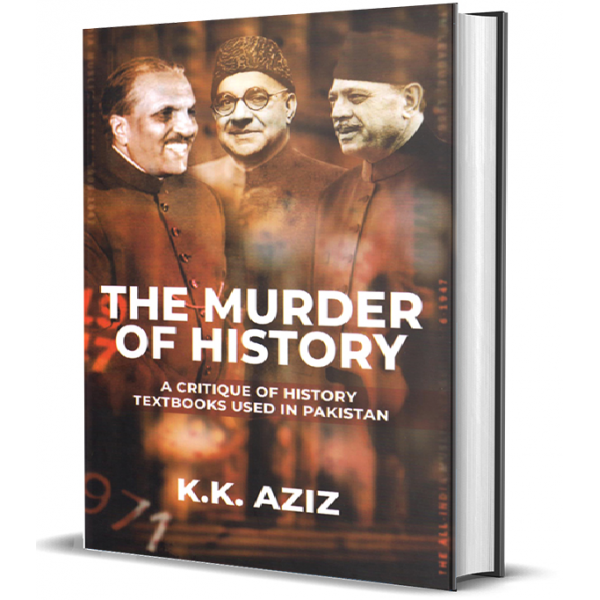 KK Aziz’s seminal study, – The Murder of History – is essential to understand what went wrong in Pakistan. The most worrying sign of an insecure and fissured polity is when it reinvents, twists and lies about its history especially relating to its genesis and progress. K K Aziz was not an Indian nationalist, nor a screaming ideologue who wanted Pakistan to fritter away. In fact his early work ‘The Making of Pakistan’ remains an essential reading on how Pakistan came into being. He believed in Pakistan despite his emotional links to the separated eastern part of the Punjab. However, at the zenith of his career he could not conceal his deep anguish and disappointment with the way ‘History’ in his beloved country had turned into sham-narratives comprising fables, myths and outright deceit.

Three brutal realities by the end of Zia era were clear: Pakistan’s military-bureaucracy complex had reinvented an ideological state based on a sectarian worldview; History was an instrument of propagating this ideology; and the jihad factories were flourishing. Jinnah’s Pakistan had been irreversibly shattered and perhaps destroyed. For K K Aziz’s generation this was nothing short of a great betrayal.

Published in the early 1990s, ‘The Murder of History’ for the first time documented a meticulous analysis of the history books taught in Pakistani schools and colleges. The book revolves around the main argument that History and Pakistan Studies curricula was nothing more political propaganda aimed at indoctrinating young minds through half-truths and blatant falsehoods. In this study, Aziz scrutinized over 65 textbooks, which have been promoting prejudice, xenophobia and discrimination in our young children (who have grown up now). According to the Aziz, the publication of such textbooks was the responsibility of the provincial textbook boards but the National Review Committee of the Federal Education Ministry had appropriated the role of approving the ‘ideological’ content.

Aziz starts with how the Pakistan movement is disfigured. How lies about Jinnah are perpetrated (for instance about his education, leanings etc.) and how military rule and wars are glorified that too without credible facts. The most incisive part pertains to the events of 1971. Aziz questions this obviously false account found in one of the textbooks: “In the 1971 war, the Pakistan armed forces created new records of bravery, and the Indian forces were defeated everywhere.” He further traces how the Pakistani Hindus in East Pakistan are blamed for engineering anti-Urdu demonstrations during Jinnah’s time. This movement started by ‘Hindus’ had sowed the seeds of separation of East Pakistan, if the disingenuous sham-historians of the state were to be believed. Aziz questions how the great surrender of Pakistan Army in December 1971 happened apparently when our troops were bagging so-called victories on all fronts. Furthermore, Aziz also dismisses the notion that accepting Bengali cultural values, as a part of national heritage, was some sort of a national humiliation.

A textbook, as Aziz notes, mentions Maulana Maudoodi among the ‘founders of the ideology of Pakistan’, when in fact the right-wing leader bitterly opposed the creation of Pakistan

A textbook, as Aziz notes, even mentions Maulana Maudoodi among the ‘founders of the ideology of Pakistan’, when in fact the right-wing leader bitterly opposed the creation of Pakistan and called Jinnah a non-Muslim. Zia ensured that an unconstitutional overthrow of Bhutto’s government was due to an ‘un-Islamic system’. Little wonder, Al-Qaeda and its partners are busy telling us why democracy should be rejected in the Islamic Pakistan. The greatest lie as detected by Aziz’s meticulous pen relates how the arrival of Zia-ul-Haq was celebrated: “General Zia ul Haq was chosen by destiny to be the person who achieved the distinction of imposing Islamic law…. The real objective of the creation of Pakistan, and the demand of the masses, was achieved.”

Aziz also records major omissions and makes a robust effort to correct them in the later chapters. The last parts of the book analyse the impact of such chicanery on the students and on the nation at large: “Assuming that three students come from one nuclear home, we have at least eight million households where these books are in daily use…Eight million homes amount to eight million parents (father plus mother), not counting other family members… In this way the nonsense written in the books is conveyed to another sixteen million persons.

After reading ‘Murder’ , one is left distressed with the unethical principles that the governments and the textbook boards follow while preparing textbooks. This is not just a matter of school curricula as Aziz rather presciently argues: “Some of the people bred on these books become journalists, columnists and editors of popular magazines and digests … making all possible allowances for the margin of duplication, we are still left with a very conservative figure of say thirty million people being told what they should not be told and hearing what they should not hear. When we recall that this group contains within itself the social and intellectual elite and the actual or potential leadership of the country, we have nothing but stark despair staring us in the face and promising rack and ruin.”

The rot has already set in. Popular media and generations raised on lies are now a formidable reality of our national discourse. Sections of print media and some TV anchors churn out such half-truths on a daily basis. Above all, the youth (as noted by many surveys) are confused about their identity with an ingrained anti-India sentiment and a vague sense of Pan-Islamic identity.

A decade and a half later when Musharraf tried to reform the curricula his attempts were foiled by powerful ideologues within the Establishment and very soon he lost the will to drive this reform. When the Aga Khan Foundation took the initiative in Karachi, the Mullahs threatened and roared. The current PPP government’s education policy makes no concrete commitment to the textbooks. Aziz’s last line remains relevant: “Is anybody listening?”

Pakistan’s existential battle is inextricably linked to the poison of these textbooks. Without a concerted effort to purge our curricula of xenophobia, jingoism and Islamo-fascism, we are simply doomed. The political elites have a small window of opportunity. If they are not going to forge a consensus on textbooks’ reform, their relevance in the long term remains uncertain. This is why K K Aziz’s legacy is formidable and needs to be reiterated every now and then.

Raza Rumi is a writer and policy expert based in Lahore. He blogs at http://razarumi.com. Email: [email protected]