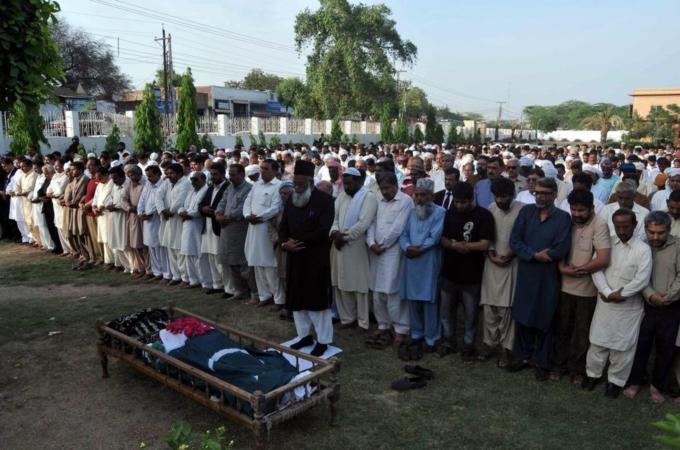 Earlier in March, on the eve of Hindu festival Holi, an allegation of blasphemy against a local Hindu led to the attack on a community centre and a temple in the stronghold of liberal PPP (Pakistan Peoples Party) Larkana in Southern Pakistan. The scenes of vandalisation in Sindh province, otherwise known as the land of Sufis and where the largest number of the Hindu population lives, were chilling.

It is pointless to moan the response of the state officials who are content with terming such issues “sensitive” or in other words a no-go area carved in the public imagination. A report by Reuters states that March 2014 was the “worst month for attacks on Hindus in 20 years with five temples attacked, up from nine during the whole of 2013”.

Nearly a month ago, a Lahore court awarded death sentence to another alleged blasphemer, Sawan Masih, marking a new low in our legal and judicial system. A low income settlement in Lahore – Joseph Colony – was attacked in 2013 and nearly a hundred homes were torched. The mayhem was triggered by an ‘allegation’ of blasphemy. To give credit where it is due the Punjab government promptly helped in rebuilding these homes. However, its police and prosecution failed to nab those who were involved in this kind of “collective punishment”.

Pakistan has the unique distinction of abusing the controversial blasphemy laws and according to a recent report (prior to Sawan’s sentence), 14 individuals were on death row on blasphemy convictions and 19 convicts were serving life sentences There are hundreds of others who have been arrested or charged with the crime. It is not the execution of a sentence but the fear and mob justice that comes in the wake of such charges. After Rehman’s murder, lawyers would think twice before taking such a case. Judges would be afraid to deliver verdicts and the police – already partisan – will further abandon its job.

After the sentencing of Sawan Masih, a few parliamentarians raised this issue in the national assembly but nothing changed. Outraged citizens protest, write op-eds in the English press and few reckless types like me, who tried to raise these issues on television, face bullets.

In the short term, Pakistan’s Parliament needs to change the investigative procedure of the blasphemy law and institute safeguards against adverse police reporting. Most importantly, it will need to protect the judges and lawyers who defend human rights.

In this #vlog razarumi says that the radical and transformative