As Pakistan negotiates with a critical moment of its 64-year-old existence, there is nothing more urgent than to review its foreign policy goals and the assumptions that define them. It is an open secret that the unelected institutions of Pakistan for decades have designed controlled and implemented its foreign policy, often at variance with Pakistan’s own pragmatic self-interest. Such have been the contours of Pakistan’s foreign policy perspective, that the institutional interests of its all-powerful military and the allied intelligence complex dominate the definition and outcome of an imagined “national-interest”. Considering how Pakistan finds itself locked in a battle of nerves with the United States since the strike on Osama bin Laden’s compound in the garrison town of Abottabad, on May 2, 2011, there is perhaps no better time for its elites to review and redefine what passes for foreign policy.

The publication of Aparna Pande’s book, explaining “Pakistan’s Foreign Policy – Escaping India” (Routledge , 2011) is pretty timely and relevant if the powers that be in Pakistan were prepared to pay attention to Pande’s thesis and cogent arguments presented in this book. Aparna Pande is a research fellow at the Hudson Institute, USA; however, it’s her Indian origins that may raise eyebrows within the paranoid policy circles of Pakistan. 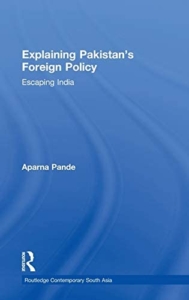 Before I talk about Pande’s book, it might be pertinent to note three imperatives of foreign policy discourse in Pakistan. First, the debate on policy, notwithstanding the vibrant critiques within English print media, is by and large controlled by the state. Small wonder that most of the foreign policy related think-tanks are either financed by the government, or work in “close cooperation” with the state agencies. Second, as regards India, the constructed nature of Pakistan’s enmity and Indian “designs” especially since 1971 war have acquired a broad legitimacy and even academic acceptability in the past three to four decades. For instance even the most educated minds and opinion makers of Pakistan adhere to the notion of securing some measure of strategic depth in Afghanistan vis-a-vis the traditional arch rival ie India. Finally, something needs to be said about the nature of policy process in Pakistan which remains highly guarded, non-transparent and pretty much subservient to the political and economic hegemony of the security establishment.

“In some ways Pakistan has been trying to escape its Indian legacy – historic, geographic and civilisational – and attempting to find security in a virtual relocation through ideology”

In recent times two instances would illustrate the point noted above. Late Benazir Bhutto during her first tenure as Prime Minister (1988-1990) attempted to normalise relations with India, at least symbolically. The visit of the then Indian Prime Minister Rajiv Gandhi to Islamabad in 1989 was a landmark of sorts. However, this moment was scuttled by the security establishment through a combination of Urdu media propaganda and actual arm-twisting that resulted in the declaration of Bhutto as a ‘security risk’, ouster from power and years of persecution on various charges. In her second tenure Bhutto was careful to go along with the way the security establishment wanted to attain strategic depth in Afghanistan through the creation and victory of Taliban. However, the most ironic moment was the volte-face of Prime Minister Nawaz Sharif (created by the military as a proxy) in his second tenure (1997-99) when he initiated a policy of peace with India and wanted to take the relations beyond the confines set by the India-centric policy parameters. Sharif had to pay a price for his transgression: First came his humiliation when the army, apparently without his authorisation, launched a limited war with India in Kargil; and second his physical ouster through a coup d’etat in 1999, imprisonment and eight years of exile.

Given the recent history and ongoing civil-military struggles, the political consensus in Pakistan today is tilted in favour of normalising relations with India and seeking increased economic cooperation along the lines of Sino-Indian rapprochement. Of late, the ongoing dialogue with India has not been undermined by the powerful security establishment. One reason for this shift is the difficult the situation Pakistan’s military faces vis-a-vis USA in the context of Afghanistan war and the expected endgame in 2014.

In her book Aparna Pande, problematises the issue of a constructed Pakistani identity and identifies “Islam and Islamic unity” as the “principle drivers” of Pakistan’s foreign policy. Thus the Pakistani state’s view of Islam as a potential “substitute for nationalism” for Pakistani identity provides a framework for what follows in the insightful chapters of this book. Pande is clear: “In some ways Pakistan has been trying to escape its Indian legacy – historic, geographic and civilisational – and attempting to find security in a virtual relocation through ideology”. The othering of India was meant to be the basis for Pakistan’s viability and future. Such a state had to remove all “Indian” traces to purify itself. The book’s central theme on Pakistan’s policy thrust of ‘seeking parity’ with India and ‘escaping’ from an Indian or South Asian identity becomes the focus of the book.

Having said that, there was a parallel, though subtler, construction of a weak and fledgling image of Pakistan in India, which continues to date. In part, Pakistan’s policy makers were also reacting to the perceptions of Indian politicians such as Patel who were quick to conclude that Pakistan would not survive. It is a tad ironic that Pakistan’s founder Jinnah had envisioned USA-Canada type relations between the two countries and had even announced his tentative plans to retire or at least frequently visit his native city Bombay. Perhaps, the direction that Pakistan took after the passage of Objectives Resolution in 1949 set the course for a foreign policy and perennial contest over its identity. This was not in line with Jinnah’s declarations on the kind of state Pakistan was to be.

Pande notes how “… the 1949 Objectives Resolution of Pakistan’s First Constituent Assembly emphasised the need for ‘ordering lives in accordance with the teachings and requirements of Islam’…. Over time, the existential threat to Pakistan has been expanded to include all global powers engaged in conflict with Muslims. This has included, at different times, the Soviet Union, Israel and the United States.”

In the subsequent years, as Pande narrates in her book, Pakistan has failed to articulate and follow a pragmatic foreign policy. Over time, the gradual Islamisation stressing exclusion of non-Muslims in national affairs has led to the generation of ‘demand’ for highly ideological policy.

Aparna’s style is fluid and accessible. The book seems to have transitioned well from a phd thesis into a readable analysis of the ebbs and flows of Pakistan’s foreign policy hallmarks, blunders and strong points. There are places where one does not agree with author; however, the arguments are well researched and therefore retain credibility.

The overall emphasis of the book is to highlight how Pakistan’s exclusive ‘ideological’ identity as opposed to a multi-ethnic nation-state cognisant of its past inhibits the formulation of a realistic foreign policy. This is a view, which many in Pakistan would empathise with especially the political parties. The book also documents the nuances and shades of policy options articulated by various political and religious groups.

Since the publication of this book, Pakistan’s leader of the opposition – Nawaz Sharif – has yet again stated that he stands for peace with India. A bipartisan political consensus now challenges the security establishment’s carefully carved India-centric worldview. A subtle shift even there is now becoming apparent. Given the ongoing tussle with the US and its war machine, the military, especially its middle ranks are more inclined to place the “American threat” above the historical paranoia about India. Whereas this may be turning into an alarming perception, there seems to be some room for refocusing India policy. The process of such a strategic shift remains unclear given the strong interests of the military, which require a permanent enemy to maintain its leverage over Pakistan’s domestic political and economic governance. More importantly, the imagined identity of Pakistan is undergoing another transformation due to increased manifestations of radicalisation in the society due to excessive state patronage given to Islamist groups and militant outfits.

Pakistan’s battle for survival has once again given the country’s elites a chance to re-envision its foreign policy. Hope Pande’s work is read widely and not dismissed as yet another America based researcher (of Indian origin) undermining Pakistan’s ideological prowess.