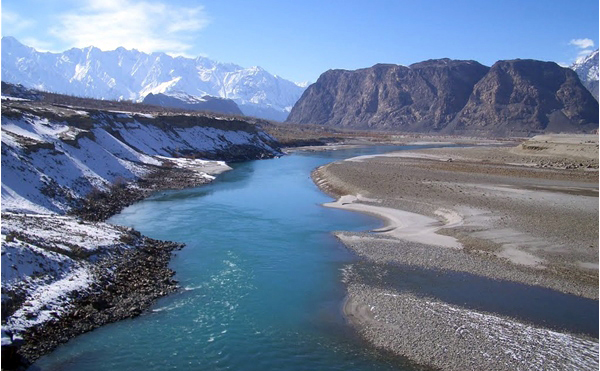 From ancient Vedic times to stories told by Sufi saints, the Indus continues to play a central role in the legends and folklore associated with the region. Even today, the shrine of Uderolal, a composite Hindu-Muslim place of worship and the cult of Lal Shahbaz Qalandar are rooted and nurtured by the Indus and its magic. Not long ago, both Hindus and Muslims believed that the flow of Indus was determined by the saint Lal Shahbaz Qalandar. Lal Shahbaz Qalandar is also referred to as ‘Jhule Lal’, or the god of waters. Some Hindus also referred to him as Raja Bharati.

Sehwan Sharif, the site of Lal Shahbaz Qalandar’s tomb, was also the location of a prominent Shiva centre

Current beliefs and practices still reflect continuity with the past. Sehwan Sharif, where the tomb of Lal Shahbaz Qalandar’s is situated was the site of a Shiva centre. It is said that the name Sehwanistan has been derived from Sivistan, city of Shiva. Moreover, there is a striking similarity between the dressing of contemporary faqirs and Shivite yogis as both dress in ‘torn clothes with matted hair.’

In Uderolal is the tomb of a saint referred to as Shaikh Tahir by the Muslims and Jhulelal or Uderolal by the Hindus. Both refer to him as the Zindapir (Living Saint)

As noted above, Uderolal is a curious tomb: Muslims believe that a saint named Shaikh Tahir is buried here; while the Hindus consider this place to be the shrine Jhulelal or Uderolal. In common parlance, he is also known as Zindapir (Living Saint). Uderolal is one of the places where the Indus is still worshipped by Hindus and Muslims. It is also worshipped in another part of Sindh, near the town of Sukkur.

Shrines of Sufi saints are situated along the riverside in Sindh. It is believed that 125,000 holy men are buried ‘in the yellow sandstone necropolis at Thatta’ alone, writes Samina Quraesihi in her book on Sufism. All year round, a great number of people continue to visit the tombs as a way to show their respect and receive blessings. Just like Lal Shahbaz Qalandar, Khwaja Khizr is also referred to as Zindapir and ‘pani ka badshah‘ (Water King). The devotees still believe that he lives under the water and the river flows the way that he commands. As recently as the late nineteenth century, Hindus and Muslims also worshipped side-by-side at the Zindapir’s shrine in Sukkur. Moreover, many of the saints have said to have caused miracles in the region through their powers over the Indus.

Such meta-religious beliefs and practices can also be understood with reference to Shah Abdul Latif’s ‘Risalo’. This is a sacred Sindhi book put together by Latif. It is given equal reverence by both Hindus and Muslims, and contains excerpts from the Quran, the traditions of the Prophet Mohammad (PBUH), Persian poetry and Sindhi folklore. It does not focus on any one form of authority and includes doctrines from various sects in Islam. On the whole it represents the similarity in spiritual beliefs related to Hinduism and Islam as practiced in the region. Moreover, it is still a symbol of this peaceful co-existence between the followers of the two religions.

In the home of the Sajjada Nasheen of Latif’s shrine, in Sindh today, the Qur’an and the Risalo are covered with cloth and ‘laid like babies – like the Baby Krishna – in a cradle.’ Thus the syncretism present in the region is evidently visible. Similarly, Latif’s folklore most often represents the heroine as ‘the soul on her spiritual quest,’ where she is often from a lower caste than the hero. According to Samina Quraeshi, this is done in order to show that ‘a fuller spiritual experience can be enjoyed by taking on a feminine consciousness…it is in keeping with the Indian mystical concept of the ‘virahini’ – the pining woman separated from her husband.’

Moreover, many Hindus in Sindh consist of ‘Nanakpanthis’, those who follow Guru Nanak. According to Alice Albinia inEmpires of the Indus, ‘during the 1881 and 1891 censuses, Nanakpanthis could not decide whether they were ‘Hindu’ or ‘Sikh’ and gave different answers each time.’ This syncretism can further be seen as the Ismailis, who settled in the region in the ninth century CE (in particular the Satpanthi community) believe that the Prophet Muhammad, or his son-in-law Ali, was the tenth avatar of the Hindu god Vishnu.

As noted above, Uderolal is also the saint of the water worshippers. Sindh continues the ancient water worship practices, some evidence of which has been discovered in the ruins of Moen-jo-Daro. Close to Sehwan, Laki Shah is a small place where visitors gather to purify their souls and bodies by bathing in springs. Similarly, in the localities of Mol Sharif, near Thano Bula Khan and Lahoot, water provides an arena for worship. This is not different from the view of the Ganges as a sacred river.

The composite culture that evolved over centuries of amalgamation of various spiritual practices continues to date. This consensus of sorts was truncated by the events of the early twentieth century when Muslim identity and corresponding claims to nationhood resulted in the movement for Pakistan. Sindh and its myriad subcultures became victim to of the higher games of politics, power-seeking and economic interests of local leadership.

The Partition of the subcontinent in 1947 brought with it a new shape to the politics and cultures of the Indus region. The physical took over the mythological as the new state of Pakistan was dependent on the Indus as a major source of water and livelihoods.

One of the key post-Partition issues was how to divide the waters of the Indus basin – a previously ‘cohesive and unitary network of irrigation’. This was eventually decided through the Indus Water Treaty, which was signed in 1960. The fact that it took thirteen years to reach an agreement reflects the difficult nature of the task. Essentially this difficulty arose because the source rivers were located in India.

Thus Pakistan was insecure in terms of the availability of continued water supply from the Indus as this was its primary source of water for agricultural land. It wanted the distribution to be based on its historic rights through which it would be entitled to all of the Indus tributaries. However, this was unacceptable to India, which later demanded that the Western tributaries be given to Pakistan and the Eastern tributaries to India.

Initially after independence, the Inter-Dominion Accord of May 4, 1948 determined how the waters were to be divided. India was bound to provide adequate water supply to Pakistan as per the accord in lieu of payments made by the Pakistani government. Negotiation for a permanent solution continued soon afterwards, but no agreement could be reached. India also did not agree to take the issue to the International Court of Justice as it claimed that the problem ‘required a bilateral solution’. Tensions were high by 1951 as negotiations were no longer taking place. However, both sides knew that it was essential for talks to continue as there could be no lasting peace without them.

In 1951, David Lilenthal, former chairman of the Tennessee Valley Authority and of the US Atomic Energy Commission, visited both India and Pakistan. Lithenthal suggested that the antagonism between India and Pakistan could be reduced and cooperation ensured in the long run if both countries worked together on an Indus Development Program. His ideas were subsequently taken up by the World Bank and eventually by Pakistan and India as well. Eugene R. Black, the President of the Bank at that time, consequently formed a working party of Pakistani, Indian and World Bank Engineers in the hopes of working for a ‘functional’ solution without worrying about political concerns. In 1954, overstepping its previous role, the World Bank offered a proposal which supported the Indian position of giving India the three eastern tributaries and Pakistan the three Western ones. It proposed the construction of canals and storage dams ‘to divert waters from the western rivers and replace the eastern river supply lost by Pakistan.’ This proposal was unacceptable to Pakistan and negotiations virtually came to a stalemate at this point.

The talks continued for the next six years. The Indus Water Treaty was signed in 1960 after it was agreed that the United States and United Kingdom would finance the construction of canals and storage facilities to divert the water to Pakistan. As part of the Treaty, the permanent Indus Commission was also set up in order to arbitrate any disputes over the waters in the future, and to ensure communication between the two countries over this matter.

After much effort and compromise the agreement was in place and has continued to be this way over the best part of the last fifty-one years. This agreement is indicative of the fact that peace between the two countries is possible in the long run, and agreements can be reached – especially when the cost of not doing so is higher for both countries.

While the Indus as a major supplier of water and life to Pakistan is a paramount reality, preserving Indus folklore is also a major challenge. Indus legends are the lived reality of the communities that reside along its majestic banks. And their livelihoods are threatened by environmental degradation and the forces of globalization, commercial greed being the key driver for change and ‘progress’. Mangroves are vanishing and the boat-communities are struggling for their survival. This is where culture and environment acquire a powerful synthesis for they are equally important to preserve and conserve life patterns.

The World Wildlife Fund states that Indus eco-region is one of the 40 biologically richest eco-regions of the world. The Indus ecoregion is situated in a semi-arid environment: it harbors riverine forests along the Indus River and mangrove forests in the coastal areas while desert ecosystems occupy the periphery of the eco-region. Currently, about 50 percent of the gross area of riverine forests is inundated in high floods. As a result, the riverine forest area is shrinking alarmingly while less salt-tolerant species have almost disappeared. It is estimated that this situation may further be compounded by the construction of new dams and barrages, enabling only 20 percent of the original forest area to get inundated.

The Mohanas (fisherfolk) have been displaced and driven towards alternative livelihoods

Local livelihoods and cultural practices along the Indus are under rapid transformation and this has a direct impact on Indus folklore: it is being diminished in the wake of ecological neglect and a population explosion. Indus communities engaged in traditional livelihoods of agriculture, fisheries and livestock-rearing have been forced to give up their traditional professions. The Mohanas (fisherfolk) have been displaced and driven towards alternative livelihoods. Over two million Mohanas have been impacted across Sindh. This has been termed as a major loss to the cultural diversity of Sindh. As we have noted above, water holds a significant position in the cultural existence of the Sindhi people. Water has been a source of literature, mystical beliefs and a composite way of life that is threatened now. This state of affairs is equally relevant to the communities that live along the Indus in the Southern parts of the Punjab province.

Reclaiming Indus folklore along with environmental conservation is a powerful way of saving the shared heritage of India and Pakistan. The Indus is an all-encompassing metaphor of securing long-term peace in the region, documenting and preserving our cultural heritage and maintaining the sublime literary standards set by the Indus followers. India cannot be without the Indus and Pakistan cannot function as a viable ecological zone without this magical river.

What could be a better agenda for the two countries to jointly pursue?

This is a shorter version of a paper presented at a folklore festival held by Foundation for SAARC Writers and Literature in Chandigarh, India.