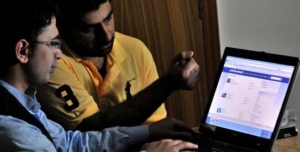 In a picture taken on May 27, 2010 Pakistani IT professionals Omer Zaheer (L) and Arslan Chaudhry browse their newly created networking site in Lahore. Pakistanis outraged with Facebook over “blasphemous” caricatures of the Prophet Mohammed have created a spin off networking site that they dream can connect the world’s 1.6 billion Muslims. A group of six young IT professionals from Lahore, the cultural and entertainment capital of Pakistan, launched www.millatfacebook.com for Muslims to interact online and protest against blasphemy. AFP Photo

When I started to blog, almost by accident, a few Pakistani bloggers were found in cyberspace. Within half a decade the number has multiplied beyond belief.

From the senior writers to young students, blogging is now an avenue that allows for unfettered self-expression and also puts the mostly urban youth in touch with the world. Most importantly, blogging has broken the geographical and ideological barriers with the neighbouring India. A decade ago, such prompt and often real time link was unthinkable.

The pace of change in Pakistan’s crackling society is rapid enough to confound any observer. Within South Asia, its rate of urbanisation is the highest and informal estimates suggest nearly 40 per cent of its population lives in urban spaces. Add to this the growth of young population, social transformation is guaranteed.

Whether we are headed in the right direction and if the state is responding to this change is a separate issue. The dynamic nature of its society and openness achieved through the deregulation of electronic media in the 1990s has been a formidable agent of change.

Alongside the growth of blogging, Facebook has captured the imagination of the young Pakistanis. With an estimated 4 million users, it is a critical space for networking, information sharing and virtual meet-ups. In a country where mixing of opposite genders is still not widely approved, social networking allows for interaction. In many ways, internet is largely egalitarian. Outside the confines of elitist clubs, schools and segregated formal world, internet dilutes class and status barriers.

Over the years, Pakistanis have experienced unprecedented culture of openness via the growth of private television networks. Despite self-censorship, taboos and corporate interests, the expansion of space with respect to freedom of expression is remarkable.

The previous decade also witnessed the concurrent rise of the telecom sector and the increased access to the Internet. Whilst the total number of mobile phone subscribers was 100 million last year, internet still lags behind. Population with access to the internet is a little above ten per cent. However, in absolute numbers it cannot be dismissed. Nearly 18 million Pakistanis reportedly have access to the internet and hence the future of alternative and social media is full of possibilities and potential.

The power of social media was noticed along with the influence of electronic media in shaping public opinion. During the lawyers movement against Pakistan’s formal military dictator General Musharraf, media reporting became a major factor of bringing various segments of Pakistani society together in opposing the military rule and supporting the deposed Chief Justice. One TV channel was banned for a short while and several anti-Musharraf blogs were also blocked. A fine example of cyber activism came about with the launch of various networks such as emergencypk among others.

During the emergency imposed in November 2007, social media provided the important link and bridge between various networks. However, this was also the time when the ancient regime of Pakistani state had to perforce acknowledge that controlling public opinion was no longer possible in the information age. High levels of information sharing through mobile telephones, dozens of TV channels, newspapers, social media among others, made the repression of dissent next to impossible. Public discontent and of course the political mobilisation by major parties led to a retreat of the national security overlord and his eventual ouster in the months to follow.

Pakistan’s media has a long history of struggles against arbitrary regimes – civilian and military -and exemplary courage has been shown by the icons of yore. In the current age suppression has become difficult and perhaps a possibility beyond the capacity of the state.

Instead media manipulation by corporate and state interests is more evident. This has led to the culture of breaking news and selling the stereotype to achieve high ratings. There are accusations of overt political agendas in the TV programming routines. More than anything else, the mainstream electronic media indulges in self-censorship to maintain its nexus with power-centres in bargains for concessions and retaining patrimonial business empires.

However, the social media is relatively free of these constraints where a no-holds-barred culture of commenting prevails. Examples of this difference are aplenty: blogs have reported candidly on the military operations in Balochistan compared to the mainstream media. Similarly, radical critiques of Pakistan’s security policies are found on the blogs. In recent times, blogs are now overshadowed by the growing role of twitter where hundreds of thousands Pakistanis and South Asians engage and remark freely on issues related to Pakistan, the region and the globe.

This is the distinctive edge that the nascent social media enjoys. It is on the rise and has given voice to the otherwise marginalised youth of Pakistan. Incidentally two thirds of Pakistan’s population is under the age of 26. In the years to come, as Internet embeds into simple handsets, and Internet usage increases, an urbanised Pakistan and a dynamic social media will be major agents of socio-political transformation.

The writer is columnist, policy adviser and editor based in Lahore. He blogs at www.razarumi.com and also manages Pak Tea House and Lahorenama webzines.